Mineralogy4Kids.org. Rock Cycle. The Rock Cycle Written for the KidsKnowIt Network by: Brandon Guymon There are three main types of rocks: igneous, sedimentary, and metamorphic. 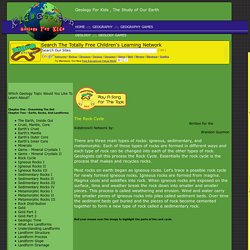 Each of these types of rocks are formed in different ways and each type of rock can be changed into each of the other types of rock. Geologists call this process the Rock Cycle. Essentially the rock cycle is the process that makes and recycles rocks. Most rocks on earth began as igneous rocks. Roll your mouse over the image to highlight the parts of the rock cycle. Our igneous rock has turned into a sedimentary rock. Metamorphic rocks can also be weathered and eroded and eventually changed into sedimentary rocks. An example of metamorphic rock. So let's take the process from the beginning, and find out how it works. When the plates crash into each other, geologists call this type of plate boundary a convergent boundary. In short, the rock cycle is the name for the processes that forms and recycles the different types or rocks on our planet.

What Is The Rock Cycle. The igneous rock gets eroded by weather, and the cycle begins again. 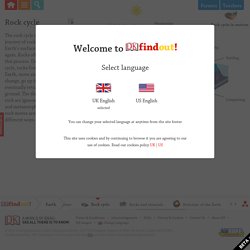 The magma (hot, liquid rock) bursts through Earth’s surface in the form of a volcano. It turns into solid rock, called igneous rock. The rock cycle is a never-ending process in which rocks continually shift and change over millions of years. Heat and pressure deep in the Earth can make rock change into a different type, called metamorphic rock. If the heat is very intense, both sedimentary and metamorphic rock can get so hot they turn into magma. Rock pieces settle as sand, mud, or pebbles on the coast. Rivers and streams carry the pieces of rock away, while breaking them down further. Erosion is the movement or carrying away of rock pieces by a river, glacier, or wind. 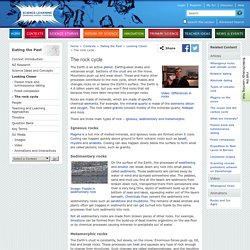 Earthquakes shake and volcanoes erupt. Sections of the crust are on the move. Mountains push up and wear down. These and many other processes contribute to the rock cycle, which makes and changes rocks on or below the Earth’s surface. The Earth is 4.6 billion years old, but you won’t find rocks that old because they have been recycled into younger rocks. Rocks are made of minerals, which are made of specific chemical elements. There are three main types of rock – igneous, sedimentary and metamorphic. Igneous rocks Magma is a hot mix of melted minerals, and igneous rocks are formed when it cools.

Sedimentary rocks On the surface of the Earth, the processes of weathering and erosion can break down any rock into small pieces called sediments. Not all sedimentary rocks are made from broken pieces of other rocks. Metamorphic rocks The Earth’s crust is constantly, but slowly, on the move. Interacting cycles. The Rock Cycle.