Cartographies of Time: A Visual History of the Timeline 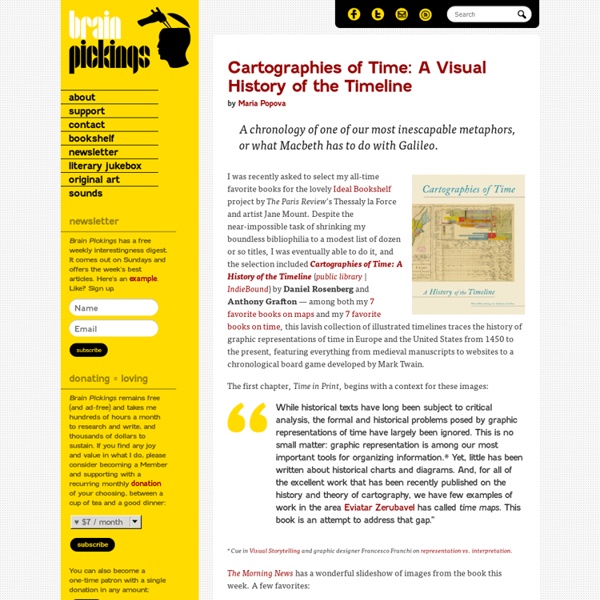 by Maria Popova A chronology of one of our most inescapable metaphors, or what Macbeth has to do with Galileo. I was recently asked to select my all-time favorite books for the lovely Ideal Bookshelf project by The Paris Review’s Thessaly la Force and artist Jane Mount. Despite the near-impossible task of shrinking my boundless bibliophilia to a modest list of dozen or so titles, I was eventually able to do it, and the selection included Cartographies of Time: A History of the Timeline (public library | IndieBound) by Daniel Rosenberg and Anthony Grafton — among both my 7 favorite books on maps and my 7 favorite books on time, this lavish collection of illustrated timelines traces the history of graphic representations of time in Europe and the United States from 1450 to the present, featuring everything from medieval manuscripts to websites to a chronological board game developed by Mark Twain. The first chapter, Time in Print, begins with a context for these images: Donating = Loving

Related:  cartography • Once Upon A Time • Maps • History + archeology • History

A New Chinese Export: Labour So Cheap , an 18-year-old factory worker from a village in Fujian. "It was impossible to sit down. Those who collapsed were kept standing by the crush of neighboring bodies." 40 maps that explain the world Maps can be a remarkably powerful tool for understanding the world and how it works, but they show only what you ask them to. So when we saw a post sweeping the Web titled "40 maps they didn't teach you in school," one of which happens to be a WorldViews original, I thought we might be able to contribute our own collection. Some of these are pretty nerdy, but I think they're no less fascinating and easily understandable. China History: Chronology, Dynasty Qin Han Tang Song Yuan Ming Qing China, one of the countries that can boast of an ancient civilization, has a long and mysterious history - almost 5,000 years of it! Like most other great civilizations of the world, China can trace her culture back to a blend of small original tribes which have expanded till they became the great country we have today. It is recorded that Yuanmou man is the oldest hominoid in China and the oldest dynasty is Xia Dynasty. From the long history of China, there emerge many eminent people that have contributed a lot to the development of the whole country and to the enrichment of her history. Among them, there are emperors like Li Shimin (emperor Taizong of the Tang), philosophers like Confucius, great patriotic poets like Qu Yuan and so on. Chinese society has progressed through five major stages - Primitive Society, Slave Society, Feudal Society, Semi-feudal and Semi-colonial Society, and Socialist Society.

40 Maps That Will Help You Make Sense of the World If you’re a visual learner like myself, then you know maps, charts and infographics can really help bring data and information to life. Maps can make a point resonate with readers and this collection aims to do just that. Hopefully some of these maps will surprise you and you’ll learn something new. Heritage Route The son of Charlemagne, Louis the Pious, and his successors, the rulers of Francia Media, visited Nijmegen regularly. The Frankish rulers had no fixed capital and travelled continuously from palace to palace. In this way they enforced respect for the royal rights and controlled the local rulers to see if they were still loyal to them. If necessary the palaces were also used as a military base. Fig. 10 Fig. 11 Nijmegen was important to the Frankish rulers and the royal supervision on Nijmegen and the region was firm. We know this because between AD 804 and 870, thirteen Reichstage were held in the Valkhof palace.

This is what living in the Viking age looked like Video: The National Museum of Denmark and Fugledegård Information Centre The largest treasure ever found in Denmark, a 1.83 kilogram heavy neck ring of solid gold, was ploughed up on a field near the lake in 1977. After the discovery, the National Museum of Denmark began snooping around the area with metal detectors. But this was only the beginning. "In about 1990, amateur archaeologists started using metal detectors in the field further north along the banks of the lake. What One Product Makes the Most Money For Each Nation? Check This Map Mali makes makes the most money from exporting cotton. New Zealand's most valued export is dairy. India profits most from selling precious stones abroad, and Sri Lanka's hottest export is tea. The export topography of each country's most valuable product demonstrates where countries trading in the world market are yielding financial gains. Although some are extremely obvious, other countries benefit financially from unlikely sources. Predictably, oil is the most traded commodity in the global market.

Ancestral Lines Evolutionary biologists use a cladogram, the treelike diagram of evolutionary branches or clades, to organize species into lines of evolutionary descent across time. Biologists use three types of evidence to deduce evolutionary connections: genetics, morphology, and geologic dating. (Behavior, normally a key part of evolutionary studies, can only be inferred in extinct species — for example, by examining the ecology in which the species flourished and the species adaptations for eating and locomotion.) Analyses of primate fossils and the genetic relatedness of living primates converge to the conclusion that humans and chimpanzees branched from a common ancestor about 7 million years ago. DNA recovered from several uncontaminated Neanderthalensis fossils indicated that modern humans and extinct neanderthals diverged about 400,000 years ago; but more recent studies show that they must have interbred within Europe or the Middle East since then.

Ancient Egyptian scripts (hieroglyphs, hieratic and demotic) Origins of Egyptian Hieroglyphs The ancient Egyptians believed that writing was invented by the god Thoth and called their hieroglyphic script "mdju netjer" ("words of the gods"). The word hieroglyph comes from the Greek hieros (sacred) plus glypho (inscriptions) and was first used by Clement of Alexandria. The earliest known examples of writing in Egypt have been dated to 3,400 BC. The latest dated inscription in hieroglyphs was made on the gate post of a temple at Philae in 396 AD. The hieroglyphic script was used mainly for formal inscriptions on the walls of temples and tombs.

A Medieval Atlas By Melissa Snell Nothing helps bring the past into focus quite like a well-executed map. Here at the Medieval History site, I've provided some maps depicting parts of the world as it was during the Middle Ages. There are also many more maps available on the web.