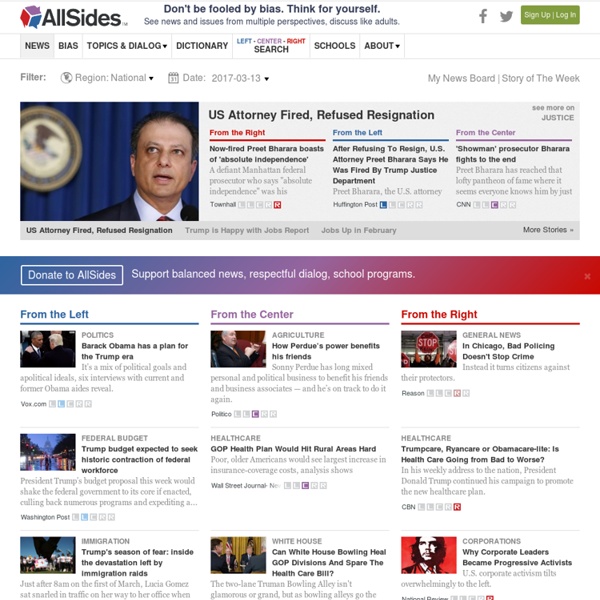 4 Sites to Fight Fake News Common Sense Education has released a 1-minute video featuring four websites to separate fact from fiction. When the next viral story, makes it to class, take break to discuss media literacy and help your students determine how these sites can be of value. This site is all about following the money. Students Reject 'Fake News' To Write Footnoted, Neutral Wikipedia Entries : NPR Ed Fake news has been, well, in the news a lot lately. But for the world's largest crowdsourced encyclopedia, it's nothing new. "Wikipedia has been dealing with fake news since it started 16 years ago," notes LiAnna Davis, deputy director of the Wiki Education Foundation. 3 Fast, Free Lesson Plans to Fight Fake News The fake news epidemic is disturbing. How do we fight it? Well, we can take a hint from how the medical community fights the flu or any other virus. We inoculate ourselves.

Commentary: It’s Facebook’s algorithm vs. democracy, and so far the algorithm is winning — NOVA Next Over the last several years, Facebook has been participating—unintentionally—in the erosion of democracy. The social network may feel like a modern town square, but thanks to its tangle of algorithms, it’s nothing like the public forums of the past. The company determines, according to its interests and those of its shareholders, what we see and learn on its social network. The result has been a loss of focus on critical national issues, an erosion of civil disagreement, and a threat to democracy itself. Facebook is just one part—though a large part—of the Big Data economy, one built on math-powered applications that are based on choices made by fallible human beings. Fake Hurricane Sandy Photos Spread On Internet As Storm Barrels Toward Northeast On Facebook, the stirring picture has more than 70,000 likes and 90,000 shares, and the viral image was picked up by NPR, The Washington Post, The Daily Beast, Talking Points Memo and others according to Poynter. The only problem? It’s not a picture from Hurricane Sandy. The picture, taken by photographer Karin Markert, is actually from September. In a comment posted by Poynter, Markert elaborates on the image’s (inaccurate) claim to fame. “I was using it as my Facebook cover photo, which apparently is ‘public,’ and what do you know?

for Schools Preparing students to participate thoughtfully in democracy - and in life. Students need to learn how to sort through mass media and social networks, think critically about the issues, and engage with each other in a healthy and positive way, even when there are differences in opinions and backgrounds. AllSides for Schools helps educators teach these valuable lessons and skills. With its unique focus on maintaining healthy relationships and revealing multiple points of view across the political spectrum, it also avoids the potential problems around bias or disrespecting individual beliefs.

10 Ways to Spot a Fake News Article - EasyBib Blog For many of us, 2016 is going down as a year to forget. Election upsets, Zika, the Syrian crisis, and unfortunately tons of fake news about all of the above and everything in between. Denzel Washington was recently quoted as saying, “If you don’t read the newspaper, you’re uninformed. If you do read the newspaper, you’re misinformed.” So what should you do? You want to be informed, but a good deal of the information out there is incorrect or biased.

Blue Feed, Red Feed What is this? Recent posts from sources where the majority of shared articles aligned “very liberal” (blue, on the left) and “very conservative” (red, on the right) in a large Facebook study. In 2015, the journal Science published a research paper by Facebook scientists (Bakshy, Eytan; Messing, Solomon; Adamic, Lada, 2015, “Replication Data for: Exposure to Ideologically Diverse News and Opinion on Facebook”, Harvard Dataverse, V2) which looked at how a subset of the social network’s users reacted to the news appearing in their feeds. For six months, Facebook tracked and analyzed the content shared by 10.1 million of its users (who were anonymized). These users had identified their political views in their own profiles on Facebook.

Supermoons Cause Tidal Waves—True or False? Our news literacy program challenges fourth graders to find out. “Last week scientists at NASA announced that they will send a manned spacecraft to the moon by the year 2018.” “Supermoons can trigger tidal waves and catastrophic earthquakes.” “A rare liger cub with a lion dad and tigress mother was born in Russia.” Only one of these news headlines is real. Can you tell which one?