Kathryn Schulz: On being wrong 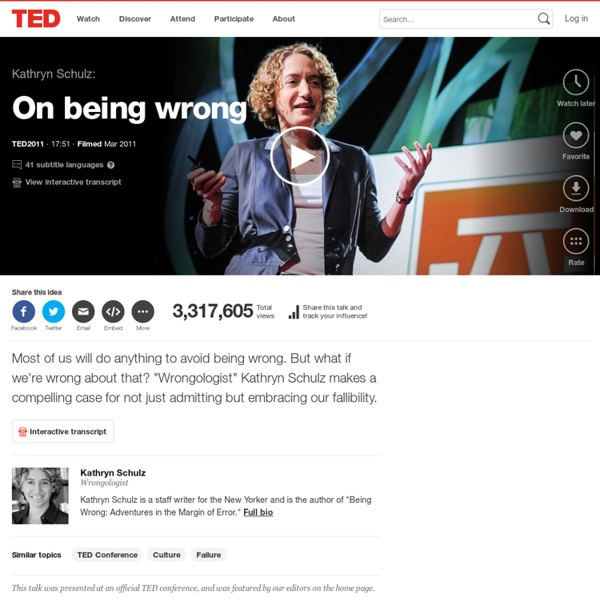 10 Eating Rules French Children Know (But Most Americans Don't) How the French eat, age, dress, raise their children and live in general is a real talking point these days. So, as an American mother of three half-French kids, I figured I'd add my two cents to the conversation. I lived in France before becoming a parent, but eventually it was my kids who taught me everything I need to know about eating like a French person: Eating, and staying slim and healthy, isn't just about what you eat, but also how, when and why. Yes, French people enjoy junk food occasionally, and sometimes they eat between meals, but people don’t just let loose every day. 1. Three meals a day, plus the children’s traditional after-school “gouter,” or snack, which might be a pain au chocolat, fruit or applesauce. When mealtimes roll around, you eat with real pleasure because you’re hungry. 2. Consuming three meals a day without grazing in between means you can eat well when you sit down at the table — and that includes a starter, main course, cheese and dessert. 3. 4. 5. 6. 7.

4 Things We Have Wrong About Creativity “Creativity” may not be the first word that comes to mind when you hear the word “conglomerate.” But Christian Stadil, CEO and co-owner of Denmark-based Thornico, a sprawling enterprise with holdings in food, technology, shipping, and others, will likely change your mind about that. Stadil is so enthusiastic about the concept of creativity that he has co-authored a new book with psychology professor Lenne Tanggaard, who teaches at the University of Aalborg in Denmark. Creativity Myth #1: You should think outside the box. Most creative breakthroughs, including ideas and products, come from well-trod areas within your own expertise, Stadil says. That kind of far-flung disconnect isn’t likely to lead to relevant new ideas. Creativity Myth #2: Big ideas come to you when you are trying to work out the problem While it may seem like breakthroughs come in a rush and tumble of ideas, true inspiration typically comes when our minds aren’t clogged with extraneous thoughts.

Einstein's Puzzle # Copyright (C) 2004 Lauri Karttunen # # This program is free software; you can redistribute it and/or modify # it under the terms of GNU General Public License as published by # the Free Software Foundation; either version 2 of the License, or # (at your option) any later version. # This program is distributed in the hope that it will be useful, # but WITHOUT ANY WARRANTY; without even the implied warranty of # MERCHANTABILITY or FITNESS FOR A PARTICULAR PURPOSE. See the # GNU General Public License for more details. Einstein's Puzzle Variations of this riddle appear on the net from time to time. It is sometimes attributed to Albert Einstein and it is claimed that 98% of the people are incapable of solving it. Let us assume that there are five houses of different colors next to each other on the same road. The Englishman lives in the red house. The question to be answered is: Who keeps fish? This is a simple constraint satisfaction problem. The result is a network with five paths.

Debunking the Myth of the 10,000-Hours Rule: What It Actually Takes to Reach Genius-Level Excellence by Maria Popova How top-down attention, feedback loops, and daydreaming play into the science of success. The question of what it takes to excel — to reach genius-level acumen at a chosen endeavor — has occupied psychologists for decades and philosophers for centuries. Groundbreaking research has pointed to “grit” as a better predictor of success than IQ, while psychologists have admonished against the dangers of slipping into autopilot in the quest for skill improvement. The “10,000-hour rule” — that this level of practice holds the secret to great success in any field — has become sacrosanct gospel, echoed on websites and recited as litany in high-performance workshops. Illustration by Vladimir Radunsky from Mark Twain's 'Advice to Little Girls.' The secret to continued improvement, it turns out, isn’t the amount of time invested but the quality of that time. Hours and hours of practice are necessary for great performance, but not sufficient. Donating = Loving Share on Tumblr

101 Ways to Be Healthy Do the healthy thing, even when it's challenging, inconvenient or considered weird. Take pride in that. Just because it's popular doesn't mean it's smart or good for you. Enlist fellow trend buckers and create a trend of your own. Use your healthy frustration about the unhealthy status quo to spark creativity and determination. Don't be boring. Uncreative Writing: Redefining Language and Authorship in the Digital Age by Maria Popova “An updated notion of genius would have to center around one’s mastery of information and its dissemination.” “And your way, is it really YOUR way?,” Henry Miller famously asked. “Substantially all ideas are second-hand, consciously and unconsciously drawn from a million outside sources,” Mark Twain consoled Helen Keller when she was accused of plagiarism. A recent interview on The Awl reminded me of a wonderful book by Kenneth Goldsmith — MoMA’s first poetry laureate, founder of the massive grassroots audio archive Ubu Web, and professor at my alma mater, UPenn’s Kelly Writers House — titled Uncreative Writing: Managing Language in the Digital Age (public library; UK). Goldsmith writes in the introduction: In 1969 the conceptual artist Douglas Huebler wrote, ‘The world is full of objects, more or less interesting; I do not wish to add any more.’ He samples a beautiful concept that broadens our definition of genius: Except, of course, none of this is new. Donating = Loving