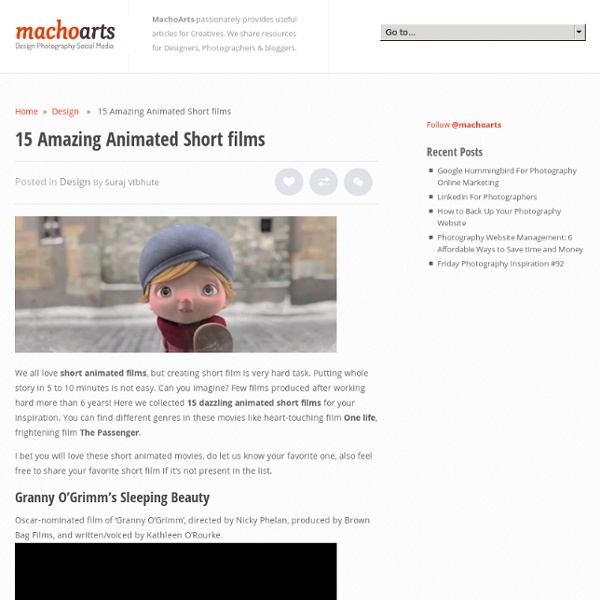 We all love short animated films, but creating short film is very hard task. Putting whole story in 5 to 10 minutes is not easy. Can you imagine? I bet you will love these short animated movies, do let us know your favorite one, also feel free to share your favorite short film if it’s not present in the list. Granny O’Grimm’s Sleeping Beauty Oscar-nominated film of ‘Granny O’Grimm’, directed by Nicky Phelan, produced by Brown Bag Films, and written/voiced by Kathleen O’Rourke. Oktapodi (2007) In Oktapodi, these two cuties help each other escape the clutches of a tyrannical restaurant cook. This Side Up – A Short Animation by Liron Topaz A naive music-lover’s patience is tested on his quest to download music online, as his perspective on technology completely changes. Oxygen Oxygen tries to make friends on the playground. “Heavenly Appeals” a short film by David Lisbe After many millennia of being tortured in Hell, Raymond K. Marcelino and Bartolomeo: Bye Bye! Bunny Animation The Passenger Alma

The 25 Most Powerful Songs of the Past 25 Years by Jennifer Drapkin, Kevin O'Donnell and Ky Henderson They’re not the most beautiful songs, or the most musically important. In fact, a few could literally drive you nuts. 25. Music That Makes Sewage Disappear For all the chatter about how Mozart makes your kids smarter (false!) 24. "867-5309/Jenny" (Tommy Tutone) The Drunk-Dialing Song For nearly three decades, this single has been a gift to smashed college kids everywhere. A few people have managed to turn the digits to their advantage. 23. The Song That Showed Saddam's Softer Side © INA/Handout/Reuters/Corbis You might think winning elections is easy for dictators—after all, they aren’t running against anyone. 22. The Tune That Revolutionized the Underarm Industry Kurt Cobain claimed he didn’t know Teen Spirit was a brand of deodorant when he wrote Nirvana’s 1991 grunge anthem. 21. The Sound that Ended Silence Forever You may not realize it, but you know this tune all too well. 20. 19. 18. 17. 16. 15. 14. 13. © Jens Wolf/dpa/Corbis 12.

Wizard of Oz / Pink Floyd synchronization now on YouTube July 25, 2012, 1:44 PM — This urban legend has been around for almost 20 years now - the idea that if you watch the movie "The Wizard of Oz" with the audio off, and then play Pink Floyd's "Dark Side of the Moon" as the soundtrack, that the music and visuals from the movie magically synchronize. Rather than trying to time this perfectly with your home theater system, you can now watch this effect on YouTube, in its entirety. It's tough to pinpoint some exact moments where the synchronization appears, but I suppose with enough alcohol or other substances (kids, don't do drugs!) [Via the fine folks at Reddit]

Celtic Symbols and Celtic Signs Celtic Symbols and Signs (portal page) For centuries, Celtic symbols and signs held incredible power for the ancient Celts in every way of life. Today, we can learn about this power and utilize it by learning the language of Celtic symbols. The word "Celtic" refers to people who lived in Britain and Western Europe from 500 BC and 400 AD. The written records remaining from the Celts of Europe are scant, therefore signs and symbols can be hard to determine and trace. Regardless, thanks to time-honored traditions, (like story-telling) enough history was salvaged, and the Celtic heritage remains strong. In honor of the bravery and magic of the Celts, and to celebrate their rich history, I now provide you with a wealth of information. Note: Whenever possible, I have cited my sources of information (even when it's just my own observations or from my personal sources such as family and friends). Having said all that, just click the images or links below to get what you need.

- StumbleUpon Midnight in Paris Woody Allen’s latest places starving writer Owen Wilson in Paris with his fiancée, Rachel McAdams. Searching for inspiration for his incomplete novel, Owen begins taking strolls around the city at night where he discovers an unexpected group of people. Let the Right One In The best vampire movie ever made in my opinion. Watch Let the Right One In for FREE on Amazon Instant Video The Man From Earth Holy &#%@ this film’s plot is fascinating! Garden State This is my absolute favorite film. Waking Life It’s impossible for you to grasp Waking Life without actually watching it, but I’ll do my best to explain it. Watch Waking Life for FREE on Amazon Instant Video Closer This film is a rather dark, yet comedic story about the twisted relationships between Natalie Portman, Jude Law, Clive Owen and Julia Roberts. The Diving Bell and the Butterfly (Le Scaphendre et le Papillon) Sin Nombre Snatch Watch Snatch for FREE on Amazon Instant Video Spirited Away The Descent Once Punch Drunk Love Rubber

8 math talks to blow your mind Mathematics gets down to work in these talks, breathing life and logic into everyday problems. Prepare for math puzzlers both solved and unsolvable, and even some still waiting for solutions. Ron Eglash: The fractals at the heart of African designs When Ron Eglash first saw an aerial photo of an African village, he couldn’t rest until he knew — were the fractals in the layout of the village a coincidence, or were the forces of mathematics and culture colliding in unexpected ways? Here, he tells of his travels around the continent in search of an answer. How big is infinity? There are more whole numbers than there are even numbers … right? Arthur Benjamin does “Mathemagic” A whole team of calculators is no match for Arthur Benjamin, as he does astounding mental math in the blink of an eye. Scott Rickard: The beautiful math behind the ugliest music What makes a piece of music beautiful?

deathray Lost Tesla Papers about the "Death Rays" Click here for Nikola Tesla interview in the New York Time about the "Death Rays" Nikola Tesla died on January 7th, 1943 in Hotel New Yorker, in Manhattan, in room 3327 on the 33rd floor of the hotel. Immediately after Tesla’s death, Tesla scientific papers vanished from his hotel room in Hotel New Yorker. Tesla papers were never found. In 1947 the Military Intelligence service identified the writings about the particle-beam contained in Tesla’s scientific papers as “extremely important.” The current beam-weapon program is originated from Tesla’s “Death Rays” idea. Tesla claimed of having invented a “death ray” capable of destroying 10,000 enemy airplanes at a distance of 250 miles (400 kilometers). On July 23, 1934 Time Magazine wrote an article about Tesla’s Ray: “Last week Dr. Nucleus of the idea is a death ray-a concentrated beam of sub-microscopic particles flying at velocities approaching that of light. Tesla “Death Rays” are Particle Beams