How to Create Social Media Guidelines for Your School 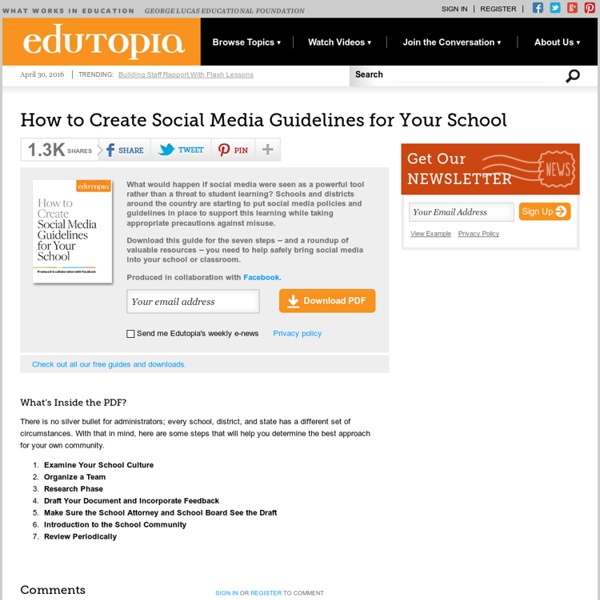 12 Things Students Should Never Do on Social Media The last thing young people want is another set of rules. But these days, social media comes with great responsibility, whether you're just starting high school or finishing up college. The fact is, irresponsible social media conduct could potentially ruin your education and negatively impact your career, not to mention hurt others in the process. (And we're not just talking kids, either.) But most of those consequences are preventable, often with just a little foresight. We've pinpointed 12 social media mistakes that students should avoid at all costs, because after all, it's never as simple as "be responsible." Please head to the comments below to add your own contributions and advice for young adults on social media. 1. Granted, high school and college students experiment with many activities and substances. Once or twice per year, perform a thorough review of the information and content accessible on your social media profiles. 2. Check your school's policy on bullying. 3. 4. 5. 6.

Memo HR staff: a social profile is not a CV 'How moral this espionage is still worries me.' Photo: Reuters It's creepy to think that you're being stalked. Not only are we told that this repugnant practice occurs but it's promoted as a reality in the education system. I remember hearing a lecture in Year 9 before applying for work experience placements. The presenter, ignoring the boys, said words along the lines of ''now you girls have all sorts of profile photos. Advertisement My classmates were terrified at this order and surely enough went home and deleted photos. In all this, there's an assumption that snooping on our social pages is legitimate. These excellent principles, however, fail to be honoured in one circumstance: when it concerns young people. In one interview, a HR guy brazenly said not only that this practice occurred but that the system was effective. How moral this espionage is still worries me; but it still doesn't justify spying on kids routinely before they're hired. Olympia Nelson is a year 11 student

What Your Teen Is Really Doing All Day On Twitter And Instagram For all the ways that adults enhance real-life relationships with social media, many have a hard time believing that online connectivity is anything but terrifying in the hands of teenagers. In her new book It's Complicated: The Social Lives of Networked Teens (February 25, Yale University Press), Microsoft principal researcher danah boyd addresses the fears and misconceptions that adults have about teens' use of social media, revealing that online networks can be a lifeline and a safety valve for a generation under extreme pressure. Based on 10 years of research, including conversations with teens across the country, boyd explores the motivations and even sophisticated etiquette that governs teens' online behavior, and explains how adults--including businesses looking to attract a teen audience--can ditch the fear and condescension, and embrace teens' complicated but important relationship with technology. FAST COMPANY: What got you interested in studying teens' use of social media?

Social media lessons from Coca-Cola, Starbucks, and Delta Are you missing a critical social media KPI? 'Social media disconnects', or when consumers unfriend/unlike or unfollow as a result of a social media marketing initiative or campaign, isn't a term in many marketers' vocabulary. Perhaps it's time for that to change. At the second annual Goldman Sachs Social Media Forum earlier this spring, Wendy Clark, SVP of Integrated Marketing Communications at Coca-Cola, covered a lot of ground with fellow panelists, including the topic of how highly engaged social media participants can shift to higher consumption patterns. For consumer packaged goods companies (or any company that has to deal with competitive issues related to share of market and share of wallet), that's a huge deal because most of the marketing and advertising dollars spent within the consumer packaged goods category are focused on preference change and increasing consumption of the product. Major brands don’t have an awareness problem. Overconsumption among loyalists The L word

Students Battle School Districts Over First Amendment Rights On Social Media Across the country, school administrators are restricting Twitter and Facebook use, even outside of school. Numerous cases highlight retaliation against students for things stated online, such as in social media and through blogging, addressing their First Amendment rights outside the realm of the education system. (Photo/Ed Yourdon via Flickr) When a New York high school student started a Twitter campaign highlighting his district’s budget woes, he found himself suspended from school for what the administration labeled as harassment. Pat Brown, a senior at Cicero-North Syracuse High School and member of the student council, began tweeting about the 2012-13 failed district budget, accompanying his tweets with the hashtag #shitCNSshouldcut. The hashtag caught on among students, creating a social media frenzy administration officials weren’t thrilled with. The revolution will be tweeted In Brown’s case, administrators applied district rules to the student’s out-of-school behavior.

Twitter and Facebook are not where kids are heading. Meet Kik and Oink. There is pervasive notion that the issues today are the same as those even three years ago. They might continue to sell this obsolete rhetoric to Edlandians, but kids are using very different networks – and here’s why. Kids are being given hand-held devices. iPod touch, low end Androids and so on. Kids are heading to Instagram and Kik because they are essentially the two messaging services that appeal. Instagram being the ‘selfie’ universe that screams “I am am here” and Kik the natural successor to MSN Messenger, saying “I belong”. On signing up for Kik, it will go off and find your friends from other places. Kids are interested in friend based networks. Intragram says “I am here” and Kik’s multi-participant ‘group’ conversations say “I belong” – or more worryingly, I’m an outcast. Why is Kik not like Twitter? Firstly, Kik won’t appeal to those who’ve build a business using Twitter to sell themselves as a brand. Is Kik like Google Plus? Is Kik like Facebook? Is Kik like Linked In Yes.

Facebook Is Not a Front Porch I created this photo prompt and used it as an optional warm-up. The results were interesting. Students care far more about numbers of friends, followers, likes and favorites than what I had thought. Here are a few of the student quotes (posted with permission): "I check Facebook first thing in the morning. "There's a rush to having ten likes all at once." "I try to tell myself that it doesn't matter if I lose followers, but it hurts." "Sometimes I take a picture on Instagram and all the hearts make me think that I might be a good photographer. I am still a fan of social media and the notion of being connected. So, my lingering thought is this: We need front porches now more than ever before.

Overcoming Hurdles to Social Media in Education (EDUCAUSE Review Key Takeaways According to a recent study, 100 percent of colleges and universities surveyed use social media, but instructors use it far less for teaching than they do for personal or professional reasons. Of those who use social media for instruction, most use video in the classroom and many use blogs and wikis. Social media has made its way into higher education. Many higher-education professionals are using social media for marketing and communication, but faculty are also adopting it in the teaching and learning process. Here, I'll discuss the findings from our recent survey at Pearson Learning Solutions, which highlighted faculty concerns about social media. Survey: Social Media and Higher Ed In this podcast, author Hester Tinti-Kane interviews Jeff Seaman of the Babson Survey Research Group. This slide show shares results of the survey in graphical form (27 slides). One area where faculty adoption is almost universal is in the use of video for classes. Barriers to Adoption Twitter

How Should Social Media Be Taught in Schools? Before we ask how, I think we should address why social media should be taught in schools. Students may appear to be comfortable using social media, but don’t assume that they know how to use it appropriately in a classroom setting. Educators Baiyun Chen and Thomas Bryer from the University of Central Florida conducted research on instructional strategies for social media last year, and they pointed out that, “one of the common themes in previous research is that students use social media for personal reasons, but rarely for educational or learning purposes.” With this in mind, teaching students how to appropriately use social media becomes not just a good idea; it becomes a school’s responsibility. The Gift of Social Learning Social media can provide two things that are critical for student engagement in a literate environment: audience and purpose. Audience refers to those who will see what students create and share. Purpose is the reason students are doing the work.