Two Guys and Some iPads 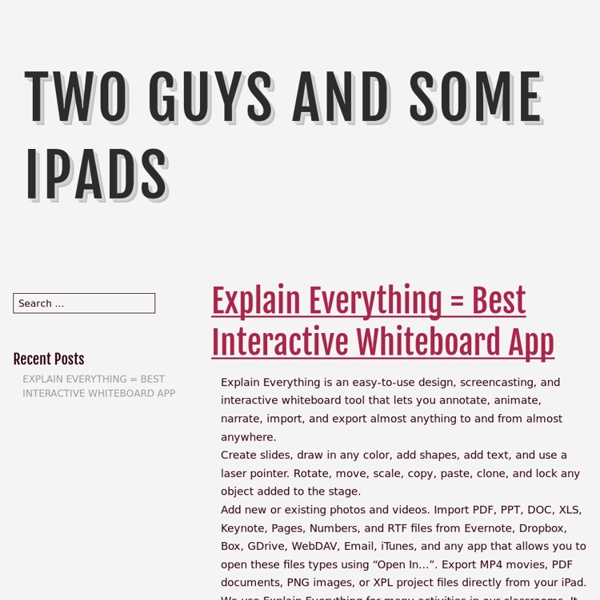 By: Brad Waid Tuesday night I boarded a plane for Washington DC. I was flying out for the National School Board Association's 20 to Watch ceremony. After landing in DC and getting a little rest, I was ready for the whirlwind of scheduled events that were to begin the next day. First up, was the "Round Table Discussion" in the Northwest room at the Washington Hilton. This is where the 20 of us, the organizers and the sponsors gathered to discuss what each of us were doing with technology and share our stories.

Related:  Websites to Check Out

The Best Ways to Use Padlet - Examples from Teachers This afternoon at the ISTE 2016 conference I had a nice meeting with Melanie Broder from Padlet. She told me about some of the things that Padlet is working on developing during the rest of the year. One of things is a community for educators. That community should help teachers find creative uses of Padlet as well as sharing lesson activities in general. Until that community gets going, take a look at Padlet's Best of Education wall. Browse All Create a custom spinner to examine experimental and theoretical outcomes. Plot a set of data and determine a line of best fit. Model linear functions using Barbie dolls and rubber bands. Construct perpendicular bisectors, find circumcenters, calculate area, and use proportions to solve a real world problem.

Tons of Classroom Examples Using Augmented Reality with @Aurasma - A Complete How-To Guide! How to Use Augmented Reality in Your Classroomthis post is read best via a desktop due to the embedded video content Augmented reality allows someone to add another layer to an existing image. For example, imagine holding your phone over a poster on the wall as if you were going to take a photo of that poster, and then instantly a video starts playing to offer you additional information about that particular poster. Pretty cool, right? The first time it happens, it seems like magic. After watching the video below, I knew I had to figure this augmented reality thing out.

For Students 2016 2b Students engage in positive, safe, legal and ethical behavior when using technology, including social interactions online or when using networked devices. Positive behaviors Interactions that convey a portrait of the way you want to be perceived and healthy interactions with technology itself, for example, moderating the time online or gaming, ergonomic issues and balancing use of media with daily physical activity. Safe behaviors Interactions that keep you out of harm’s way, for example, knowing the identity of who you are interacting with; how much and what kind information you release online; protecting oneself from scams, phishing schemes and poor purchasing practices (e-commerce theft). Legal behaviors Interactions that are mindful of the law, for example, abiding by copyright and fair use, respecting network protections by not hacking them and not using another’s identity.

Signing Savvy Blog While in the company of friends seeking a cure for blindness at a VisionWalk luncheon held by The Foundation Fighting Blindness (FFB), Debbie Wright and her mother Joan candidly share their personal story - their choices, the learning, denying, and accepting the reality of living with Usher syndrome and being Deafblind. This is Debbie Wright's story, as told by Debbie and her mother Joan - a journey of discovery with Usher syndrome and being Deafblind. An Important Question: Can Debbie Hear? Debbie Wright as a baby. (Source: Wright Family)

Daqri's Elements 4D augmented reality app aims to educate the masses Daqri is getting into the Kickstarter game to promote an app aimed at bringing augmented reality into the mainstream. Elements 4D enables an augmented reality experience using six physical blocks engraved with different symbols of the periodic table. Combining the blocks creates various chemical reactions that appear on a tablet or smartphone screen in 3D in the Elements 4D app viewer. "It is the first killer app for augmented reality," the company boasted. "We wanted to design a product from the ground up that had augmented reality [which Daqri calls '4D'] at its core. Up until now it's been layered on top of something and more of an afterthought," said Daqri CEO Brian Mullins.

Visualizing Learning with Infographics: 23 Resources “Numbers have an important story to tell. They rely on you to give them a clear and convincing voice.” – Stephen Few This year get your students to visualize difficult concepts or understand a process by teaching with infographics. Use infographics to introduce a chapter, unit, or lesson. Students can work in small groups to decipher the infographic.

Top 10 Most Read Music Education Blogs of 2016 - NAfME As 2016 comes to a close, NAfME wishes its members a safe and happy holiday season. To help you reflect on the past year, we’re providing the readers of NAfME’s “Music in a Minuet” blog a look at the 10 most-accessed articles from the year (with a tie for #7), followed by two popular music education advocacy articles. By NAfME Member Matthew Stensrud Beyond a single classroom such as mine, advocates, families, educators, and policymakers committed to education equity must also remain committed to having the arts in our schools. Why? Because low-income students often have the most to gain from an arts-rich curriculum.