Civic Online Reasoning. Everyone Has Invisible Bias. This Lesson Shows Students How to Recognize It. Last year, an English teacher at my school came to me with an all-too-common concern about an essay a student named Kyle had just turned in. 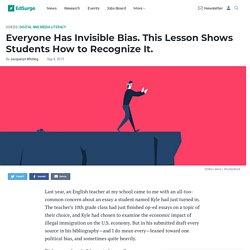 The teacher’s 10th grade class had just finished op-ed essays on a topic of their choice, and Kyle had chosen to examine the economic impact of illegal immigration on the U.S. economy. But in his submitted draft every source in his bibliography—and I do mean every—leaned toward one political bias, and sometimes quite heavily. “It happened again,” lamented my colleague. What Is Fake News? - Fake News Websites. You've definitely heard about fake news by now. There's a chance it's come up in class, around the dinner table with your family, or on Twitter. The Fight Against ‘Fake News’ in the Classroom Gets a Boost. Years before phrases like “fake news” and “alternative facts” made their way into the English lexicon, Alan Miller realized that a time was coming when the truth would need defending. 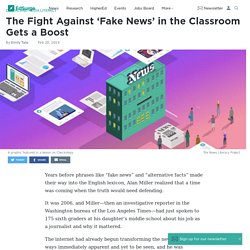 It was 2006, and Miller—then an investigative reporter in the Washington bureau of the Los Angeles Times—had just spoken to 175 sixth graders at his daughter’s middle school about his job as a journalist and why it mattered. The internet had already begun transforming the news industry, in ways immediately apparent and yet to be seen, and he was thinking about—and giving talks about—what the future held for journalism. So when his daughter, then 12, brought home 175 handwritten thank you notes from her classmates that day, Miller’s wheels started turning. “I could see it resonated with them,” he says. “It was the seed of an idea.” “Knight has obviously been familiar with us over our lifetime,” Miller tells EdSurge.

These changes have contributed to what Miller describes as a public health crisis. Curriculum Providing Guidance on Verifying Content from the Social Web. Crash Course-Introduction to Navigating Digital Information #1 EXCELLENT. Video Series for Evaluating Digital Information. Media Literacy Game for Detecting Viral Deceptions. Teaching Strategies to Detect Fake News or Fact. Fact Finder: Your Foolproof Guide to Media Literacy. Are your students savvy searchers? Can they spot the difference between a straight news article and an opinion piece? News literacy tools: Advice, four sites and a new app (Swiipe) One of the reasons our students find and use news that is less than credible is that their news habits are less than energetic. 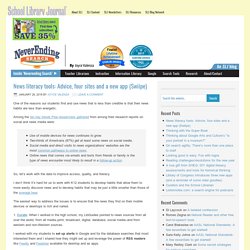 Among the ten key trends Pew researchers gathered from among their research reports on social and news media were: Use of mobile devices for news continues to grow.Two-thirds of Americans (67%) get at least some news on social media. Social media and direct visits to news organizations’ websites are the most common pathways to online news.Online news that comes via emails and texts from friends or family is the type of news encounter most likely to result in a follow-up action. So, let’s work with the data to improve access, quality, and literacy. Top 10 sites to help students check their facts.

Supermoons Cause Tidal Waves—True or False? Our news literacy program challenges fourth graders to find out. “Last week scientists at NASA announced that they will send a manned spacecraft to the moon by the year 2018.” 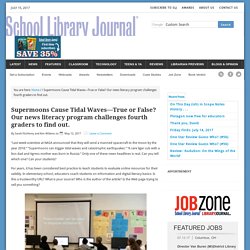 “Supermoons can trigger tidal waves and catastrophic earthquakes.” “A rare liger cub with a lion dad and tigress mother was born in Russia.” Only one of these news headlines is real. How to outsmart fake news in your Facebook feed. It doesn't have to be this way. Fake news is actually really easy to spot -- if you know how. Consider this your New Media Literacy Guide. 1. Does the story come from a strange URL? Zimdars says sites with strange suffixes like ".co" or ".su," or that are hosted by third party platforms like WordPress should raise a red flag. 2. 10 Ways to Spot a Fake News Article - EasyBib Blog. For many of us, 2016 is going down as a year to forget.

Election upsets, Zika, the Syrian crisis, and unfortunately tons of fake news about all of the above and everything in between. Denzel Washington was recently quoted as saying, “If you don’t read the newspaper, you’re uninformed. If you do read the newspaper, you’re misinformed.” So what should you do? You want to be informed, but a good deal of the information out there is incorrect or biased. 1. Links and citations allow us to easily access, read, and explore more about the information found in the article. Executive Summary 11.21.16. Balanced news, issues and opinions, media bias ratings, political news. 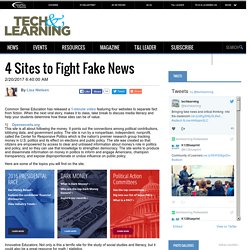 When the next viral story, makes it to class, take break to discuss media literacy and help your students determine how these sites can be of value. This site is all about following the money. It points out the connections among political contributions, lobbying data, and government policy. The site is run by a nonpartisan, independent, nonprofit, called the Center for Responsive Politics which is the nation's premier research group tracking money in U.S. politics and its effect on elections and public policy. 1000+ images about News Literacy on Pinterest. 3 Fast, Free Lesson Plans to Fight Fake News. The fake news epidemic is disturbing. 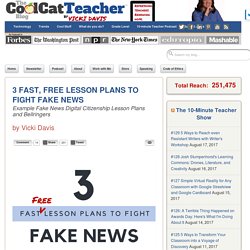 How do we fight it? Well, we can take a hint from how the medical community fights the flu or any other virus. We inoculate ourselves. In this post, I’ll teach you how I teach about fake news. Fake Hurricane Sandy Photos Spread On Internet As Storm Barrels Toward Northeast. On Facebook, the stirring picture has more than 70,000 likes and 90,000 shares, and the viral image was picked up by NPR, The Washington Post, The Daily Beast, Talking Points Memo and others according to Poynter. 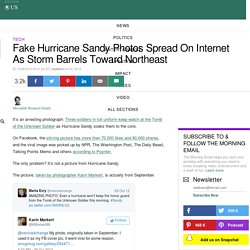 The only problem? It’s not a picture from Hurricane Sandy. The picture, taken by photographer Karin Markert, is actually from September. In a comment posted by Poynter, Markert elaborates on the image’s (inaccurate) claim to fame. Identifying Fake News: An Infographic and Educator Resources - EasyBib Blog. Don't Click Here: Facebook, Algorithms, and Articles You Won’t Be Shown. Fake news, bias, or satirical comedy what's the difference. Fake News and K-12 Information Literacy: Following the November 2016 Presidential election, there was great concern about fake news on Facebook and in Google searches. 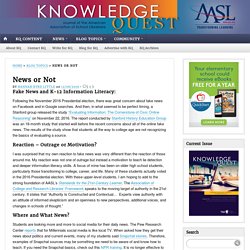 And then, in what seemed to be perfect timing, a Stanford group released the study “Evaluating Information: The Cornerstone of Civic Online Reasoning” on November 22, 2016. The report conducted by Stanford History Education Group was an 18-month study that started well before the recent concerns about all of the online fake news. The results of the study show that students all the way to college age are not recognizing the basics of evaluating a source.