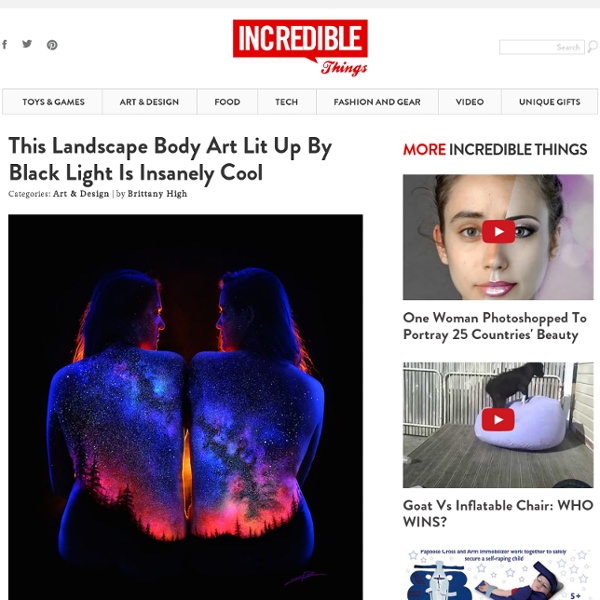 This is a collection of Black Light Bodyscapes by artist and photographer John Poppleton. John paints these landscapes onto female models and lights them with a black light. As you can see, the black light really makes them pop! Also, if you try really hard and believe in yourself, you can see some serious side boob, too. See videos of the blacklight body paintings at John’s Youtube pager HERE. Via: My Modern Metropolis Related:  Check This!

Calling new creatives James Reid, photography director of Wallpaper* magazine; Jefferson Hack, editorial director of Dazed Group; Johanna Neurath, design director at Thames & Hudson; Sarah Thomson, head of art production at Fallon; Daniel Moorey, head of print at communications agency adam&eveDDB; Andy Saunders, senior vice president of creative content at Getty Images; and photographers Oliviero Toscani and Miles Aldridge – these industry-leading figures are all on the extremely impressive judging panel for the Next Photographer Award. A new prize organised by D&AD and Getty Images, the Next Photographer Award offers emerging image-makers the chance to be mentored by professionals such as Sarah Thomson and Daniel Moorey, funding to realise a personal project, flights and tickets to the D&AD Professional Awards Ceremony, and a coveted D&AD ‘Pencil’ mark of honour. Entrants are invited to submit three images, which can be from a series or one-offs, and which can be on any subject.

The Art of Sandra Chevrier - Sandra Chevrier currently lives in Montreal, Quebec. She is a gaze collector, an idea chaser and a full time single mom. Her work takes her traveling over a broad range of fluctuating emotional enigmas and concepts that have set the standard of our modern communication. Working in a home studio, Sandra produces her work at a full-time scale, aggressively pursuing a common thread until it is worn away, leaving her to begin on a new path. She exposes the limitations within our world, our self-imposed expectations and the cages we have allowed to bar us from fullness of life’s experience. Her work is shown in Canada as well as in the United States, United Kingdom and in Norway. The series "cages" is about women trying to find freedom from society's twisted preconceptions of what a woman should or shouldn't be. Sandra uses collage or loose and heavy textures of paint that make the woman seem to be emerging from the surreal world within the canvas. Sandra Chevrier's Webpage

RGB to multichannel to CMYK (and back) from the Course Photoshop CS3 Channels and Masks: The Essentials All right, so in the previous exercise I introduced you to the Multichannel mode which allows you to switch from one color model to another color model without running any conversions. The only question is why in the world would you want to do such a thing. Why would you want to switch from RGB to a taped CMYK image or even worse to just a bizarre looking Lab image and the answer is you wouldn't. That's why I've crafted these next two lessons, this lesson and the next one is to give you a sense of a couple of practical applications from Multichannel, just to expand your mind, to inspire your creativity. In this exercise we're going to go from RGB to Multichannel, to CMYK and then back to RGB in order to create an interesting color effect and then in the next exercise we'll go from CMYK to Multichannel, to RGB in order to create an intense highsaturation affect. And this is, of course, the original unmodified version of the image. Now you can't tell, but it's filled with cyan.

Breathtaking Surreal Self Portraits by 20-Year-Old Rachel Baran 20 years old U.S.-based photographer Rachel Baran creates powerful surreal and conceptual self portraits … Rachel Baran Save Yourself Hours - The Most Effective Way To Clean Backgrounds In Photoshop If you’ve shot in any studio, then you know the rules. Larger studios may require the use of protective booties on a freshly painted cyc wall or some practice the unsaid "no shoes" rule when stepping onto background paper. But, unfortunately, that just doesn’t happen and if the subject is jumping or moving look after look that background is going to get dirty. In my opinion, it’s probably one of the more annoying aspects of studio fashion re-touching, especially if you’re shooting on white seamless paper. Create A New Layer. Add Median Noise. Create A Layer Mask. Paint On The Median Blur. Add Noise. I've never claimed to be a fantastic re-toucher, I just share from experience and always try to pay the knowledge forward.

Learn How to Design a Charming Collage Composition Learn How to Design a Charming Collage Composition Today we’re going to learn how to create a super creative collage effect, using a range of photo manipulation, blending and compositional techniques. You’ll learn how to correctly extract your images, layer up various effects to create a sense of depth and detail, and create a cool sketchy hand-drawn effect for your photos. Final Image As always, this is the final image we’ll be creating: Step 1 Create a new file with a width of 1500px and a height of 2000 px at 100 dpi (Dots per Inch). Step 2 To start off we’ll use various textures to create a subtle distress background. Reduce opacity to “30%” Now add “8.jpg” as a new layer within the same folder, then hit Command/Ctrl + T and resize to cover the canvas and name it “Texture 2″. Change the Blend Mode to Overlay and lower its Opacity to 65%. Place “2.jpg” from the “source” folder as a new layer within the same folder. Change the layer mode to “hard light” and reduce opacity to “45%” Step 3 Step 4

photomonth - East London Photography Festival New Amazingly Surreal Portraits by 19-Year-Old Alex Stoddard One of our favorite young photographers, Alex Stoddard, continues to expand his collection of creative images, offering an endless source of inspiration for his peers. The 19-year-old photographer manages to produce engaging narratives with each image he shares through his Flickr account, inviting viewers to get lost in their surreal nature. His latest additions are no exception as they provide visions of unconventional beauty in the bodies of frail individuals engulfed in smoke, limp figures writhing on a beach, and the haunting presence of a man soaked in blood. Never short on ideas, Stoddard's portfolio is constantly growing with brand new visuals. Alex Stoddard on Flickr via [iheartmyart]

Derren Brown - 7 - 29 November 2014 | RebeccaHossack The Rebecca Hossack Art Gallery presents an exciting exhibition from an illusionist who has turned away from the paranormal to explore and celebrate the richness of the everyday. After a two-year break, Derren Brown has created a new series of portraits in his unmistakable style. Many aspects of his work are driven by a delight in facsimile, the fake masquerading as the truth. Accompanying his new work will be a selection of earlier portraits, and, for the first time, a collection of his street photography. These themes of public and private self, of togetherness and separation, form a backbone to an exhibition of extraordinary and touching images.

Family Face Mashup Photography Brings Out Strong Resemblances Each of Ulric Collette's portraits is composed of two relatives' faces mashed together to show how strong family resemblances are Think you don’t look like anyone in your family? French-Canadian photographer Ulric Collette might just be able to prove you wrong. Collette created mashups in which he takes photographs of two family members, edits half of each face and creates one seamless portrait. He calls it the “Genetic Portraits” series. Turns out gender differences and age gaps don't matter. Check out these amazing images: Mother/Daughter: Francine, 56 & Catherine, 23 Ulric Collette Twins: Alex & Sandrine, 20 Daughter/Mother: Marie-Pier, 18 & N’sira, 49 Sisters: Anne-Sophie, 19 & Pascale, 16 Brothers: Christopher, 30, & Ulric, 29 Daughter/Mother: Jill, 25 & Johanne, 54 Mother/Daughter: Julie, 61 and Isabelle, 32 Portrait génétique from Ulric Collette on Vimeo.

Intimate, Painterly Photographs of London Bus Passengers On Their Nighttime Commute Photographer Nick Turpin‘s series Through a Glass Darkly takes a different approach to candid street photography than we typically see. Turpin captures London bus commuters on their way home after a long day, and his photographs are at once artistically compelling and potentially controversial. Is this voyeurism? Is it street photography? Exhaustion is often the least of the emotions writ on many of the subjects’ faces; we see glimpses of hopes, dreams, frustrations, and fears staring at us through the fogged up glass of the bus window, and we don’t know if we’re being allowed into this moment or taking it by force. “Most of my work takes a Street Photographers approach because I’m interested in recording the way that we live and making as close to a document as photography is capable of,” Turpin told us when we reached out to him. That much is obvious. Gear-wise, Turpin uses a Canon DSLR with a 70-200mm lens and the benefits of image stabilization.

Beautiful Scanner Bed Self-Portraits Recently, we saw this fashion photo shoot involving experimental photography with a model and a scanner. The results of that creative process were stunning, so I was excited to come across photographer Whitney Justesen, who also skillfully operates a scanner to tell creative stories with her photographs. Justesen's self-portraits portray a young girl experiencing a variety of emotions. To make this series of photographs, Justesen lugged a bag of props over to a friend's house to borrow the scanner and to experiment with all kinds of expressions and poses. Whitney Justesen's website via [Pulmonaire]