Nature Is Speaking – Harrison Ford is The Ocean 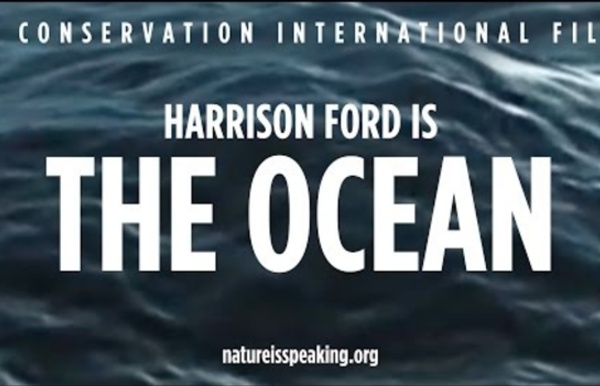 Launch of publication to value nature - The Nature Conservancy Australia The Conservancy is pleased to join the Australian Committee for IUCN and other partners in launching a new publication on 24th November 2015 – Valuing Nature: Protected Areas and Ecosystem Services. This book—which was co-edited by Dr James Fitzsimons, Director of Conservation for the Conservancy’s Australia Program— had its catalyst in the compelling fact that the world’s ecosystems and the myriad life forms they support, from mountains and oceans to forests wetlands and arctic ice, hold multiple values and deliver many benefits or ‘services’. They are the fundamental underpinning of life on Earth. Their rich values and services are crucial to human livelihoods, cultures, economies and well-being. However, while National GDPs may be growing overall, both ecosystems and the benefits they support are declining at unprecedented rates.

Mom Abandons Her Baby, Now Watch What The Cameraman Does. UNBELIEVABLE! It all started one sunny spring morning, when a YouTube user named Darius watched two baby whitetail deer being born in his backyard. He noticed of the babies had an injured leg and struggled to keep up with Mom. Sadly, the baby’s mother and sibling abandoned him right there on Darius’ property. Knowing the baby would surely die on her own, the homeowner — and passionate animal lover — decided to take in the fragile fawn and nurse her back to health. “I do not support keeping wild animals as a pets, but this was special situation,” Darius said.

Designers Create Vegan Cashmere Made From Tofu KD New York a dance wear apparel company has launched a Kickstarter campaign to fund their new vegan cashmere made from the leftover soybean fiber created during tofu production. Vegan cashmere is sustainable since it’s made from a normally disposed of by product, flexible, has anti bacterial properties, is machine washable, has “superior drape and breathability”, biodegradable and most importantly cruelty free. The new vegan cashmere collection will feature 13 pieces including hoodies, camisoles, shawls, leg warmers, and leggings. David Lee co founder said in a post: “We launched this campaign on Kickstarter so we can remain independent, and reach a community that believes in true sustainability and innovation, we passed our target with about 6 hours to go.

New Report Calls for Policy Reforms to Achieve Planetary and Human Health NAIROBI, October 30, 2015 - Changing environmental conditions such as increased carbon dioxide emissions, rampant use of fertilizer and the acidification of the oceans could lead to major health challenges for millions of people, according to a new report launched today in Nairobi. The Rockefeller Foundation-Lancet Commission on Planetary Health report, Safeguarding Human Health in the Anthropocene Epoch, establishes clear linkages between planetary and human health. The report explains that the health and well-being of future generations is being jeopardized by the unprecedented degradation of natural resources and ecological systems. An increasing population, unsustainable consumption and production and the over-exploitation of natural resources are straining the planet's resources and having an impact on human health. "Our studies have shown that up to 60% of Kenya's urban residents live in slums and slum settings," said Dr. Dr.

In The 1950s, Wives Were Expected To Do THIS For Their Husbands. This Is Crazy?!? It’s so fascinating to learn about how people used to live — especially when we discover that not much has really changed. However, sometimes you come across some old traditions that you simply can’t believe people ever followed — like these odd dating rituals throughout history. But what women in the 1950s were expected to do for their husbands? Well, those traditions have certainly flown right out the window! In May of 1955, Housekeeping Monthly published an article entitled, “The Good Wife’s Guide,” detailing all the ways that a wife should act and how best she can be a partner to her husband and a mother to her children.

The Portrayal of Natural Environment in the Evolution of the Ecological Public Health Paradigm 2.1. Public Health and the Environment The environment has long been considered a determinant of health, but the environment conceived simply as the physical things surrounding people does not take into account the reciprocity between the environment and people. Public health has progressed from considerations of the physical environment as an undynamic external entity to a contemporary acceptance of the ecological paradigm. The ecological paradigm recognizes the relations not only between organisms but also between organisms and their physical surroundings. This has largely been a socio-ecological approach with the organisms in question being humans and the focus on the relationships between humans.

And the Oscar goes to… This is a ready-made, video-based lesson you can use with your upper-intermediate / advanced students. Copy and paste whatever you want, to your heart’s content! It’s yours to use. The activities have never been tested, so any feedback is most welcome. A Discuss 1-6 in pairs. Any surprising answers? Harmful effects of ecosystem changes on human health Use constraints This graphic may be reproduced in any form of educational or non-profit purposes without special permission from the GRID-Arendal, provided acknowledgement of the source is made. GRID-Arendal would appreciate receiving a copy of any publication that features this graphic. No use of this graphic may be made for resale or any other commercial purpose whatsoever without prior permission in writing from GRID-Arendal.

Child Grows up With 2 Gorillas. 12 Years Later, They Reunite In The Wild. I’m Speechless. For 15 years, conservationist Damian Aspinall has been working to reintroduce captive gorillas to the wild. In 2003, Damian released Djalta and Bimms — two western lowland gorillas he raised from when they were babies — into the forests of West Africa. Over the years, Damian revisited the pair of gorillas, but his daughter Tansy hadn’t seen them in 12 years. So, in 2014, Damian brought Tansy into the wild to try and find Djalta and Bimms. He wasn’t sure if they would remember Tansy, the once little girl who was raised right alongside her gorilla friends. “I was considering whether it was safe for Tansy to come on land and see Djalta and Bimms,” Damian says in the following video.

Two Guys in Mexico Just Created Vegan Leather From Cactus Mexican entrepreneurs Adrián López Velarde and Marte Cázarez recently debuted Desserto, the first organic leather made entirely from the nopal (or prickly-pear) cactus. The entrepreneurs’ aim was to create a sustainable, cruelty-free alternative to animal leather. The material is partially biodegradable and has the technical specifications required by the fashion, leather goods, furniture, and automotive industries. Thanks to its flexibility, breathability, and durability of at least 10 years, the cactus leather has the ability to replace the use of animal leather and synthetic materials that are not environmentally friendly. López Velarde and Cázarez quit their jobs to focus on developing Desserto, also known as cactus or nopal vegan leather. Want more of today’s best plant-based news, recipes, and lifestyle?

Desert Ecosystem The Oxford dictionary defines an ecosystem as "a biological community of interacting organisms and their physical environment." In other words, it's a network of plants, animals, and microbes, which work together as a unit in a particular area, and the abiotic factors of that area, such as location, climate, and soil. Though there is no definitive boundary of an ecosystem as such, following its nutrient cycle and energy flow can be helpful if you are to get well-versed with the concept. As for a desert, firstly, it's NOT a barren land devoid of life, as it is usually believed to be.

Five Steps to Writing a Good For and Against Essay An essay is a formal piece of writing which describes, analyses or discusses a particular issue. The most common types are: Opinion essays. They present the writer’s personal opinion of the topic, supported with examples and reasons.For and against essays. They present both sides of an issue in a balanced way. The Australian desert – the outback of Australia Warning. Australian Stories may contain the names and images of Aboriginal and Torres Strait Islander people now deceased. Australian Stories also contain links to sites that may use images of Aboriginal and Islander people now deceased. Albert Tucker, Last days of Leichhardt, 1964, Harold Mertz Collection, University of Texas. Australia's desert landscapes, regarded as the ‘outback' of Australia, are a powerful symbol of place, and have inspired and helped define Australia's identity. The desert is part of the mythology of rugged survival in a harsh climate.