Why is biodiversity so important? - Kim Preshoff. What is Biodiversity? Why Conserve Biodiversity? We are learning more every day about the answers to this question, which has moved closer to the forefront of our collective psyche as new environmental challenges emerge. 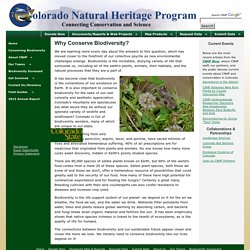 Biodiversity is the incredible, dizzying variety of life that surrounds us, including all of the earth’s plants, animals, their habitats, and the natural processes that they are a part of. It has become clear that biodiversity is the cornerstone of our existence on Earth. It is also important to conserve biodiversity for the sake of our own curiosity and aesthetic appreciation. Colorado’s mountains are spectacular, but what would they be without our splendid variety of wildlife and wildflowers? Colorado is full of biodiversity wonders, many of which are unique to our state. Medicines originating from wild species, including penicillin, aspirin, taxol, and quinine, have saved millions of lives and alleviated tremendous suffering. 40% of all prescriptions are for medicines that originated from plants and animals. 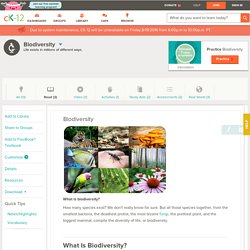 How many species exist? We don't really know for sure. But all those species together, from the smallest bacteria, the deadliest protist, the most bizarre fungi, the prettiest plant, and the biggest mammal, compile the diversity of life, or biodiversity. Importance of Biodiversity ( Read ) Why is biodiversity important? 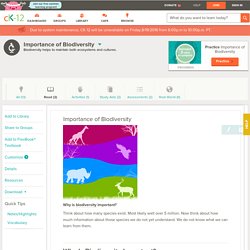 Think about how many species exist. Most likely well over 5 million. Now think about how much information about those species we do not yet understand. We do not know what we can learn from them. Importance of Biodiversity ( Read ) Why is preserving the rainforest important? 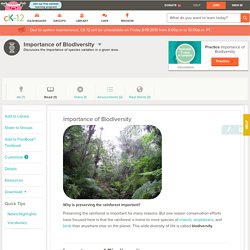 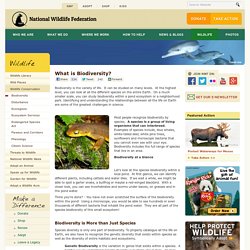 It can be studied on many levels. At the highest level, you can look at all the different species on the entire Earth. On a much smaller scale, you can study biodiversity within a pond ecosystem or a neighborhood park. Identifying and understanding the relationships between all the life on Earth are some of the greatest challenges in science. Most people recognize biodiversity by species. Biodiversity at a Glance Let’s look at the species biodiversity within a local pond. Think you’re done? Biodiversity. Biodiversity – Key To Ecosystem Health. 22 February 2000 by Kate Melville It has long been known that a diversity of plants and animals can be a good indicator of a healthy ecosystem. 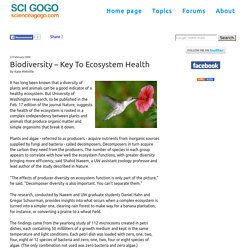 But University of Washington research, to be published in the Feb. 17 edition of the journal Nature, suggests the health of the ecosystem is rooted in a complex codependency between plants and animals that produce organic matter and simple organisms that break it down. Plants and algae - referred to as producers - acquire nutrients from inorganic sources supplied by fungi and bacteria - called decomposers. Decomposers in turn acquire the carbon they need from the producers. "The effects of producer diversity on ecosystem function is only part of the picture," he said.

The findings came from the yearlong study of 112 microcosms created in petri dishes, each containing 50 milliliters of a growth medium and kept in the same temperature and light conditions. "It's all disappearing very, very quickly. Why Is Biodiversity Important? Who Cares? It was noted earlier that ecosystems provide many services to us, for free. 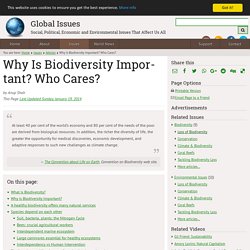 Although some dislike the thought of trying to put an economic value on biodiversity (some things are just priceless), there have been attempts to do so in order for people to understand the magnitude of the issue: how important the environment is to humanity and what costs and benefits there can be in doing (or not doing) something. Large-scale biodiversity is vital to maintain ecosystem health. Over the years ecologists have shown how biological diversity benefits the health of small, natural communities. 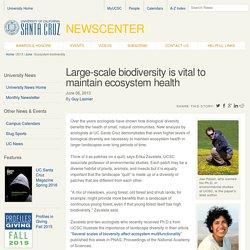 New analysis by ecologists at UC Santa Cruz demonstrates that even higher levels of biological diversity are necessary to maintain ecosystem health in larger landscapes over long periods of time. Think of it as patches on a quilt, says Erika Zavaleta, UCSC associate professor of environmental studies. Each patch may be a diverse habitat of plants, animals, and insects but it is equally important that the landscape “quilt” is made up of a diversity of patches that are different from each other. "A mix of meadows, young forest, old forest and shrub lands, for example, might provide more benefits than a landscape of continuous young forest, even if that young forest itself has high biodiversity," Zavaleta said. Lead author Jae R. Tilman – also a co-author – created 168 plots nine meters square and planted them with randomized combinations of perennial grassland species. Bioindicators.