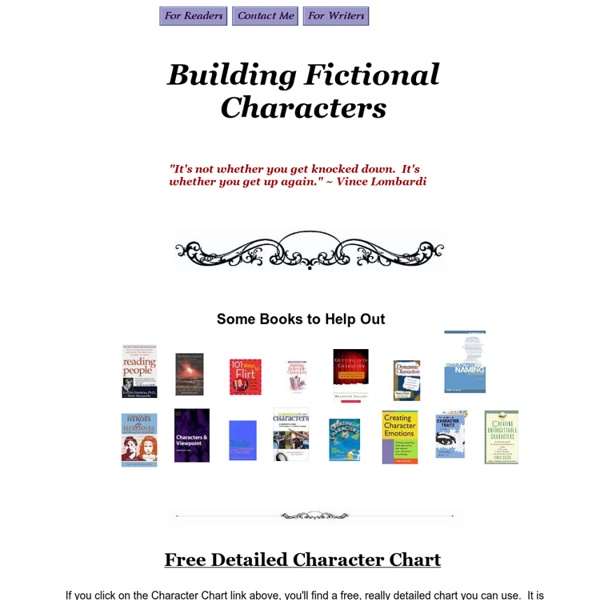 Ten Editing Tips, for Your Fiction Mss. | Margaret Atwood: Year of the Flood Speaking of writing, which we did a lot in Tofino: I put these together for a friend, but maybe someone out there could also use them… 1.The beginning. This is the key signature of the book. Sets the tone, introduces the leitmotifs. Are the people in it main characters? 2. 3. 4. 5. 6. 7. 8. 9. 10. Like this: Like Loading... 10 Days of Character Building: Interview - PoeWar This is Day 5 of 10 Days of Character Building The character interview is a chance to explore both a character’s background and voice. It is an exploration of a character’s opinions, experiences, goals and attitudes. The basic method of conducting an interview is simple. You ask questions and then, as the character, answer those questions. Interviews come in many forms, and you can get as creative with them as you like. You may also pose the interview as a police interrogation, a job interview or a therapy session. One of the real benefits of the interview method is that it can be a free flowing and natural process. Here are some interviews of authors to get you in the mood:

Article of The Month This is a quick exercise designed to sketch out the major events of your novel. It only gives you a map-- you have to make the drive yourself! Get a kitchen timer or set your alarm. You're going to free-write for three minutes on several questions. Type or write the question, then set the clock, read the question allowed, and go. 1. 3. There's not enough money for costumes. 7. Okay, half hour's up. Answer 4 gives the protagonist's intended destination. # 6 lists obstacles to the resolution of the conflict. Just remember, your ending is going to help determine the message your reader will retain after closing the book, so make it fit your theme. Rogues To me, names have power, and finding the right name is essential for a book. I also need to find names that fit the period. This doesn't always mean that it'll be one of the "ten most popular" of the time, but it needs to be believable. So, when I started writing medieval novels, I went looking for medieval names. The following is a list of names collected as I researched the period, names of monarchs and nobles, or of people mentioned in court cases and other documents. Below I give a frequency of occurrence list for the fourteenth century kindly supplied by Arlene Sindelar. Please note that some names are place and period specific. Men's names. Women's names. The most popular female English late medieval names are (in order of frequency in the attorney rolls of 1329-1340) Alice (overwhelming) Joan (including Jane), Agnes, Margery, Isabel. For interesting reading on this subject, check out Back to the site menu

Lightning Bug Gothic Names Short Treatise on Anglo-Norman Personal Names It is a common misconception that medieval English naming practices centred on a relatively small number of personal names. While this is indeed true for the later medieval period, the Anglo-Norman period (which lasted from the Conquest on down to the beginning of the fourteenth century or so) provided a much larger variety of available and relatively common personal names. While certain of these were more popular than others, they did not dominate naming practices to the extent that names such as John, Thomas, Richard, and William for guys and Anne, Elizabeth, Cecily, and Margaret for girls did in later centuries. Furthermore, the popular names in the 13th century did not necessarily maintain their popularity in later years. You will notice the popularity of saints' and Biblical names for both sexes. I will not say much about surnames except to note the two most common forms. Cartulary of Blyth Priory, R.T. Men's Names Women's Names

Write or Die by Dr Wicked Medieval Favourites - British Baby Names image by Jeff Cottenden Castles, Knights, Jousting, Longbows, Wimples...lovely evocative images that the Middle Ages conjure. And the best thing? Medieval names are just as enticing as the era they hail from. "Medieval" technically encompasses an entire century of European history: the fifth to fifteenth. So many different names were used across this era, and Britain alone had a huge variety of lingual influences. But by the twelfth century England was united; the Normans ruled and had also conquered parts of Wales. With a pool so small it is difficult to define any of the names used at this time as "popular," but we can see certain names being used again and again for many different people. Here are the favourite choices for medieval parents from the twelfth to fourteenth century:

ze and zir | Gender Neutral Pronoun Blog What is a gender-neutral pronoun? What does English need a new pronoun for, anyway? Many people have expressed the need for a singular gender-neutral third-person pronoun: that is, a pronoun to use when someone’s gender is unknown or when the individual is neither male or female. Over the centuries, hundreds of new words, or neologisms, have been proposed, with the vast majority being abandoned by all but their creators. One of the biggest problems facing the adoption of a new gender-neutral pronoun is the lack of unity and organization among supporters of the idea. The title of each pronoun links to the first few pages (and concluding paragraph) of Lewis Carroll’s Alice’s Adventures in Wonderland, available for free from Project Gutenberg. This table was taken and edited from this Wikipedia page. 1. Ease of pronunciation: 4/5 Distinction from other pronouns: 4/5 Gender neutrality: 4.5/5 Although relatively obscure, this has become my favorite contender. 2. 3. 4. 5. What’s next?