Oceanic climate. World map showing oceanic climate zones, as defined by the Köppen climate types "Cfb", "Cfc", "Cwb" and "Cwc". Under the Köppen climate classification, the typical zone associated with the Oceanic climate is Cfb, although it includes subtropical highland zones not usually associated with marine climates. Often, parts of the Csb Mediterranean or Dry-Summer subtropical zones are not associated with a typical Mediterranean climate, and would be classified as Temperate Oceanic (Cfb), except dry-summer patterns meet Koeppen's minimum Cs thresholds. Other climate classification systems, such as Trewartha, place these areas firmly in the Oceanic zone (Do).[1] Properties[edit] Climates near the ocean generally have warm (but not hot) summers, and cool (but not cold) winters. 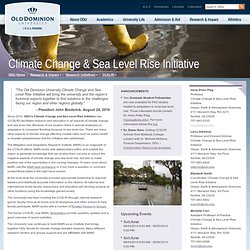 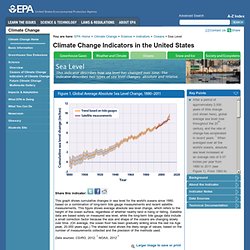 From 1993 to 2011, however, average sea level rose at a rate of 0.11 to 0.13 inches per year—roughly twice as fast as the long-term trend. Relative sea level rose along much of the U.S. coastline between 1960 and 2012, particularly the Mid-Atlantic coast and parts of the Gulf coast, where some stations registered increases of more than 8 inches (see Figure 2). Meanwhile, relative sea level fell at some locations in Alaska and the Pacific Northwest. Sea climate. Sea plants. Sea Plants. - Seagrass- Sea plants like marine algae, seagrasses, marsh grass, and mangroves provide habitats for many marine creatures including shrimp, bivalves, fish, plankton, and other small organisms. 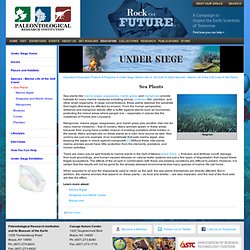 In large concentrations, these plants stabilize the substrate that might otherwise be affected by erosion. From the human perspective, wetlands and mangrove stands offer a buffer against storms such as hurricanes, protecting the inland areas where people live – especially in places like the coastlines of Florida and Louisiana. Mangroves, marine algae, seagrasses, and marsh grass play another vital role for many marine creatures – that of nursery. Many animals spawn in these areas because their young have a better chance of evading predators while hidden in the plants.

Under water plants. Sea plants. Aquatic plant. Aquatic plants are plants that have adapted to living in aquatic environments (saltwater or freshwater). 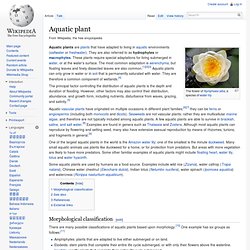 They are also referred to as hydrophytes or macrophytes. These plants require special adaptations for living submerged in water, or at the water's surface. The most common adaptation is aerenchyma, but floating leaves and finely dissected leaves are also common.[1][2][3] Aquatic plants can only grow in water or in soil that is permanently saturated with water. They are therefore a common component of wetlands.[4] The principal factor controlling the distribution of aquatic plants is the depth and duration of flooding. One of the largest aquatic plants in the world is the Amazon water lily; one of the smallest is the minute duckweed. Morphological classification[edit] Sea animal. Sea turtle. Octopus Changes Color and Hunts. Sea horse. Octopus. Water Ecosystems – Saltwater. The saltwater, or marine ecosystem has a large salt composition compared to freshwater, and covers nearly half of the earth. 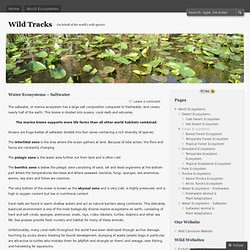 This biome is divided into oceans, coral reefs and estuaries. The marine biome supports more life forms than all other world habitats combined. Oceans are huge bodies of saltwater divided into four zones containing a rich diversity of species: The intertidal zone is the area where the ocean gathers at land. Because of tidal action, the flora and fauna are constantly changing. The pelagic zone is the water area further out from land and is often cold.

Saltwater ecosystems. Ecosystem. Unhealthy aquatic ecosystems are those where human disturbances have impaired the natural functioning (e.g., nutrient cycling) or appreciably altered the structure (e.g., species composition) of the system. 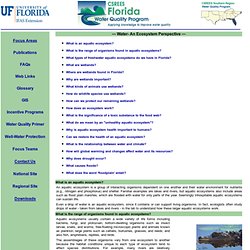