Is it worth tracking your carbon footprint? Youtube. With the climate crisis and coronavirus bearing down on us, the age of disconnection is over. Armed ecoguards funded by WWF 'beat up Congo tribespeople' Armed ecoguards partly funded by the conservation group WWF to protect wildlife in the Republic of the Congo beat up and intimidated hundreds of Baka pygmies living deep in the rainforests, an investigation into a landmark global conservation project has heard. 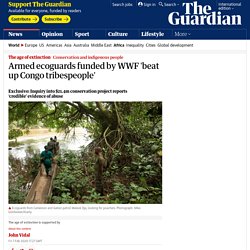 A team of investigators sent to northern Congo by the UN Development Programme (UNDP) to assess allegations of human rights abuses gathered “credible” evidence from different sources that hunter-gatherer Baka tribespeople living close to a proposed national park had been subjected to violence and physical abuse from the guards over years, according to a leaked draft of the report. Biodiversity. Europe is home to an extraordinary range of natural areas and animals. 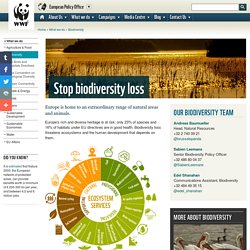 Europe's rich and diverse heritage is at risk: only 23% of species and 16% of habitats under EU directives are in good health. Biodiversity loss threatens ecosystems and the human development that depends on them. WWF's Living Planet Report 2018. Online calculator shows how trees can improve air quality and cut health costs. Billions spent on Murray-Darling water infrastructure: here's the result. Earlier this year, researchers suggested the amount of water returned to the Murray Darling Basin under a federal program has been “grossly exaggerated”, to the tune of hundreds of billions of litres. 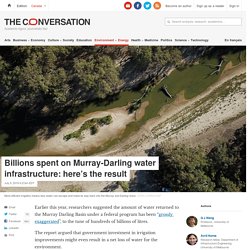 The report argued that government investment in irrigation improvements might even result in a net loss of water for the environment. Read more: The Darling River is simply not supposed to dry out, even in drought To investigate these claims, the Murray Darling Basin Authority commissioned us to undertake an independent review to examine the best available data for every irrigation efficiency project funded across the basin. We found the government investment into irrigation efficiency projects has achieved 85% of the 750 gigalitres per year target. 1 Million Animal And Plant Species Are At Risk Of Extinction, U.N. Report Says : NPR. Destruction of nature as dangerous as climate change, scientists warn. Harmful effects of ecosystem changes on human health. Earth Overshoot Day. Past Earth Overshoot Days. Five forest figures for the International Day of Forests. This is part of a series of blogs focussed on the Sustainable Development Goals and data from the 2016 Edition of World Development Indicators. 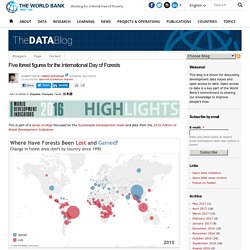 Click here to view interactive version of map A recent study based on satellite data estimates that there are 3 trillion trees on Earth - that’s over 400 trees per person. WLD 10 Nature is good medicine. Carbon-storing Amazon forest is losing its touch. The Amazon has long been seen as a life preserver of sorts in the global warming fight, its lush forest storing billions of tons of carbon. 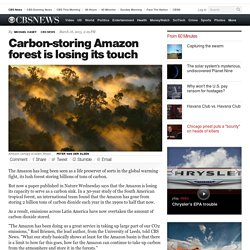 But now a paper published in Nature Wednesday says that the Amazon is losing its capacity to serve as a carbon sink. In a 30-year study of the South American tropical forest, an international team found that the Amazon has gone from storing 2 billion tons of carbon dioxide each year in the 1990s to half that now.

As a result, emissions across Latin America have now overtaken the amount of carbon dioxide stored. "The Amazon has been doing us a great service in taking up large part of our CO2 emissions," Roel Brienen, the lead author, from the University of Leeds, told CBS News. "What our study basically shows at least for the Amazon basin is that there is a limit to how far this goes, how far the Amazon can continue to take up carbon from the atmosphere and store it in the forests. 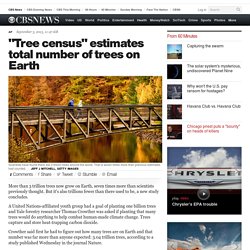 But it's also trillions fewer than there used to be, a new study concludes. A United Nations-affiliated youth group had a goal of planting one billion trees and Yale forestry researcher Thomas Crowther was asked if planting that many trees would do anything to help combat human-made climate change. Trees capture and store heat-trapping carbon dioxide. Crowther said first he had to figure out how many trees are on Earth and that number was far more than anyone expected: 3.04 trillion trees, according to a study published Wednesday in the journal Nature. 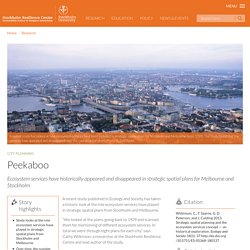 Strategic Spatial Planning and the Ecosystem Services Concept  an Historical Exploration. Copyright © 2013 by the author(s). 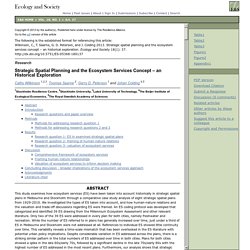 Published here under license by The Resilience Alliance. Go to the pdf version of this article The following is the established format for referencing this article: Wilkinson, C., T. Saarne, G. D. Research. Nature Is Speaking – Harrison Ford is The Ocean.

Launch of publication to value nature - The Nature Conservancy Australia. The Conservancy is pleased to join the Australian Committee for IUCN and other partners in launching a new publication on 24th November 2015 – Valuing Nature: Protected Areas and Ecosystem Services. 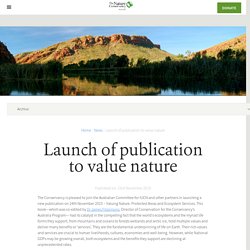 This book—which was co-edited by Dr James Fitzsimons, Director of Conservation for the Conservancy’s Australia Program— had its catalyst in the compelling fact that the world’s ecosystems and the myriad life forms they support, from mountains and oceans to forests wetlands and arctic ice, hold multiple values and deliver many benefits or ‘services’. They are the fundamental underpinning of life on Earth. Their rich values and services are crucial to human livelihoods, cultures, economies and well-being. However, while National GDPs may be growing overall, both ecosystems and the benefits they support are declining at unprecedented rates. The critical role played by protected areas in maintaining these ecosystem services and their benefits is often missing from policy and decision making.

New Report Calls for Policy Reforms to Achieve Planetary and Human Health. NAIROBI, October 30, 2015 - Changing environmental conditions such as increased carbon dioxide emissions, rampant use of fertilizer and the acidification of the oceans could lead to major health challenges for millions of people, according to a new report launched today in Nairobi. 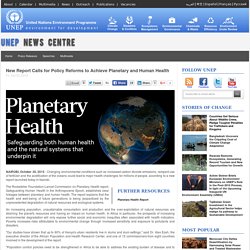 The Rockefeller Foundation-Lancet Commission on Planetary Health report, Safeguarding Human Health in the Anthropocene Epoch, establishes clear linkages between planetary and human health. Peak Oil: Myth Or Coming Reality? In 1956, a geoscientist named M. King Hubbert formulated a theory which suggested that U.S. oil production would eventually reach a point at which the rate of oil production would stop growing. After production hit that peak, it would enter terminal decline. The resulting production profile would resemble a bell curve and the point of maximum production would be identified as Peak Oil, a point of no return. The original peak oil curveImage Source: Cornell University Hubbert first predicted that U.S. oil production would peak in 1970 and then start declining rapidly. Annual crude oil production (in thousands of barrels per year) for entire United States, with contributions from individual regions as indicated. Light pollution atlas shows areas of Earth that cannot see the stars – video.

Reykjavik goes dark for Northern Lights show. The lights went out in Reykjavik on Wednesday night to give people a chance to enjoy one of the night sky's most impressive spectacles - the Aurora Borealis. Reykjavik council announced that street lighting would be switched off for an hour in the city centre and several other districts from 22:00 local time, in order to cut out the light pollution that can hamper sky-watching. It also encouraged the capital's residents to join in by turning off their lighting at home.

Theconversation. While we can never know for sure, an extraordinary number of animals and plants are threatened with extinction — up to a third of all mammals and over a tenth of all birds. And the problem is getting worse. At the same time, we have more land and sea than ever in protected areas (“parks”) — more than 200,000 protected areas covering about 15% of the world’s land area and 3% of the oceans. Research Shows Plants Are Sentient. Will We Act Accordingly? Research continues to verify the intelligence of plants. If we begin to regard them as sentient beings, will our treatment of them improve? Making Sense of Water. BERKELEY, Calif. — Almost every number used to analyze California’s drought can be debated, but this can be safely said: No level of restrictions on residential use can solve the problem.

The solution lies with agriculture, which consumes more than its fair share. That doesn’t mean homeowners can’t and shouldn’t cut back. But according to estimates by the Public Policy Institute of California, more water was used to grow almonds in 2013 than was used by all homes and businesses in San Francisco and Los Angeles put together. Melbourne water supply could be under threat within a decade, water authority says. If you don't already think of water as power, these folks make it crystal clear. Theconversation. Nearly half of 200 Australian species are threatened by climate change, according to our research published today in PLOS ONE. Climate change is one of the major contributors to global biodiversity loss, and plant and animal species can be affected by climate change in different ways. Some may be directly affected by sea level rise or snow melt, whereas some may lose a pollinator or prey species that they rely on.

Species that cannot move to more suitable habitats, or who have no suitable habitat left, risk becoming extinct. 10 Australian species at extreme risk of extinction: can they be saved? 'Giraffes are dangerous': another trophy hunter under fire after defending hobby. A big-game trophy collector from Idaho has been criticised by animal rights activists over online images of herself posed with the carcasses of a giraffe and other wildlife she killed during a recent guided hunt in South Africa. Sabrina Corgatelli, an accountant for Idaho State University, appeared on NBC’s Today show on Monday to defend trophy hunting amid mounting international outrage over the killing in July of Cecil, Zimbabwe’s most famous lion, by an American dentist.

“Everybody thinks we’re cold-hearted killers and it’s not that,” Corgatelli said in the nationally televised interview. “There is a connection to the animal and just because we hunt them doesn’t mean we don’t have a respect for them. “Giraffes are very dangerous animals. They could hurt you seriously, very quickly.” Plant Behavior. Harmful effects of ecosystem changes on human health.