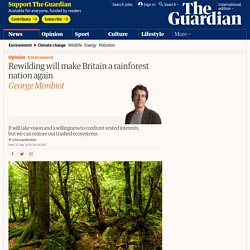 In both the Amazon basin and the rainforests of Indonesia, the world-scorching inferno rages on, already forgotten by most of the media. Intricate living systems, species that took millions of years to evolve, are being incinerated in moments, then replaced with monocultures. Giant plumes of carbon tip us further into climate breakdown. And we’re not even talking about it. But underneath the grief and frustration, I also feel disquiet. Among our missing ecosystems are rainforests. We now know that, alongside keeping fossil fuels in the ground, natural climate solutions – using the mass restoration of nature to draw down carbon from the air – offer perhaps the last remaining chance to prevent more than 1.5C, or even 2C, of global heating. Foreigners I meet are often flabbergasted by the state of our national parks.

We urgently need more trees, but we appear to believe that the only means of restoring them is planting.

Actual footage of my neighborhood when I’m out scouting for elk. Rights of Nature (personhood) This is why we need wildlife crossings. Colorado's wildlife overpasses and underpasses are keeping both animals and drivers safe, according to the Colorado Department of Transportation (CDOT). 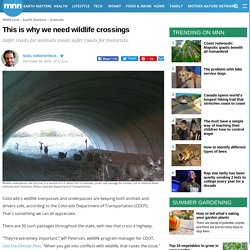 That's something we can all appreciate. There are 30 such passages throughout the state, with two that cross a highway. ACROSS THE POND: Bolton blames Iran for failed attack on key Saudi port. Plus, Malaysia's last male Sumatran rhino dies, ending hopes of saving the species in the country, and @juliamacfarlane explains a traditional British cheese-rolling competition.

What have the Rowans ever done for us? Bee corridors (wildlife corridors) *****Ecosystem fragmentation: Map shows bears in Europe. Germany was used to have the Problembär Bruno back in 2006. Map source Problembär Bruno. *****Ecosystem fragmentation: Sloth rescued - He’s so grateful □ Hedgehog highways (wildlife corridors) Ennerdale. *****Ecosystem restoration and rewilding: There are no two ways about it- the Lake District is an utterly ruined, ecologically impoverished landscape. It’s a deeply distressing thing to behold. If a landscape could unde. Hugh Warwick sur Twitter : "A year ago @cameraZoe and @FILMOXFORD students made this short film about my Linescapes work. As we look towards slowing and halting ecological degradation we need to consider the connections - for us, for wildlife and between.

A traffic jam in South Africa.. □□… *****Ecosystem fragmentation: Why did the #beaver cross the road? Because her habitat was fragmented by anthropogenic transportation systems #roadecology #biodiversity… #Map of the dingo fence in #Australia. At a length of 5,614 km (3,488 mi) it is the longest fence in the world. Source.

*****Ecosystem fragmentation: Animated #map of #Africa shows #elephant population over time. Source. *****Soil is the very stuff of life (ecosystem services). How many harvests are there left? Powerful and pretty scary short film. #soil #WilderFuture… *****Ecosystem fragmentation: Salmon crossing a road in Washington… Wow that is incredible. Now we can ask " why did the salmon cross the road "…

*****Wildlife corridors: Wildlife bridges and corridors can help plants and animals move between fragmented habitats. RT if you think the UK needs many more (photo from Switzerland) #WilderFuture… Shifting baseline. Anyone else noticed this? Where have all the insects gone?… Cost effective, faster and better for the fish. Learn more about the #fishing industry. Knepp Castle Estate. Simon Kuestenmacher sur Twitter : "My friends working in #permaculture have long been pushing this idea: Calls for us all to switch entirely to #veganism for environmental reasons ignore how important grazing and browsing animals are for the overall #ecos.

*****Ecosystem fragmentation: Been revisiting a site I surveyed 10 years ago. Still #adders here and very pleased to see this new sign. Don't know of any others in the UK?… Golden eagle chicks released to boost south of Scotland population. Media playback is unsupported on your device A long-awaited project to boost the population of golden eagles in the south of Scotland has taken off. 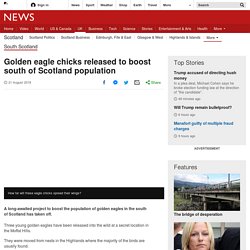 Three young golden eagles have been released into the wild at a secret location in the Moffat Hills. *****Wildlife corridors: Migration Marvels Part 2: Birds without Borders - Thames Basin Heaths. Migration really is one of the world’s natural wonders! 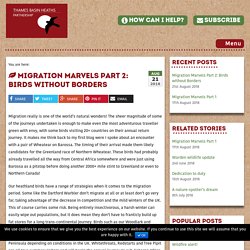 The sheer magnitude of some of the journeys undertaken is enough to make even the most adventurous traveller green with envy, with some birds visiting 20+ countries on their annual return journey. It makes me think back to my first blog were I spoke about an encounter with a pair of Wheatear on Barossa. The timing of their arrival made them likely candidates for the Greenland race of Northern Wheatear.

These birds had probably already travelled all the way from Central Africa somewhere and were just using Barossa as a pitstop before doing another 2000+ mile stint to Greenland or even to Northern Canada! Our heathland birds have a range of strategies when it comes to the migration period. Out with pesticides, in with wildflowers. *****Ecosystem fragmentation: Elephants. *****Ecosystem fragmentation: Cliff swallows (Petrochelidon pyrrhonota) have developed shorter wings in less than 30 years to better adapt to their new road environment.

*****Wildlife corridors (poster): The Wildlife Trusts sur Twitter : "A nature recovery network is a joined-up network of habitats that allow wildlife and people to thrive – in housing estates, on farms, along riverbanks. Trump plan could open Giant Sequoia monument to logging. For the largest living things standing on the planet, California’s giant sequoias have an unassuming, almost gentle aura to them. 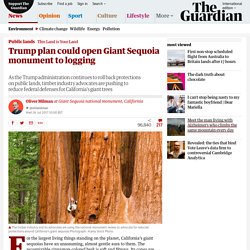 The recognizable cinnamon-colored bark is soft and fibrous. Its cones are modest. When cut down, the trees tend to shatter and won’t produce reliably sturdy timber. These majestic plants have a lineage stretching back to the Jurassic period, but fears over their future have prompted a somewhat counterintuitive plan presented to the Trump administration – in order to save the giant sequoias, some say, their surrounding area must be stripped of protected status. As part of the Trump administration’s determination to roll back regulation and open public land to private industry, the interior secretary, Ryan Zinke, is currently undertaking a review of more than two dozen national monuments declared since the 1990s.

Worthley, an attorney and former corporate counsel for Sequoia Forest Industries, argues that the government isn’t doing enough. Really interesting presentation on ecomimicry - taking inspiration from the existing brownfield site microhabitats and including within landscape design to benefit biodiversity… Must have missed the pheasant crossing sign... #76MM… *****Ecosystem fragmentation: Wow. Graphs in @JohnAltringham’s chapter in show roads have devastating impacts on bat populations. Habitat fragmentation, destruction, degradation & collision all part of the picture. Designers & @High. Sarah Swadling sur Twitter : "Good news for Red Squirrels in UK and Ireland. @IrishSqPmarten study confirms Pine Martens are clearing out Grey Squirrels in Scotland. @tomheapmedia and I went on a great squirrel/marten roadtrip about this for @Costingtheea.

*****Wildlife corridors: Crossing Option A M25. Deer Collisions on the M25 and in Greater London. What is environmental enrichment? #BatCareConf @naomi_rebecca3… *****Wildlife corridors: This man is creating hedgehog crossings in London. In an effort to make London more hospitable for hedgehogs, Michel Birkenwald is building passages for them to travel from one green space to the next. 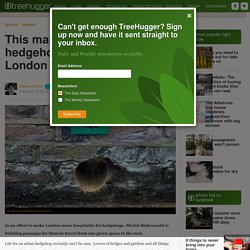 Life for an urban hedgehog certainly can’t be easy. Lovers of hedges and gardens and all things green and shrubby, walls and fences create a manmade maze that hampers the hedgehog’s ability to easily navigate about the city. What to do? Give them wee doors and tunnels, of course. Which is exactly what Michel Birkenwald has been doing for the last four years. “I am just an average guy who decided to help one of our most adorable mammals,” says Birkenwald, a jeweler who moonlights as a hedgehog hero.

Based in the South West London neighborhood of Barnes, Birkenwald founded Barnes Hedgehogs and now he and his hedgehog co-crusaders drill holes for free around town and provide signage to ensure that nobody tries to inadvertently close the openings. And oh so wonderfully British they are. "Mrs. Via Atlas Obscura. On the Trail of the North American Buffalo. The next 10 to 20 years could be extremely significant for restoring wild populations of American bison to their original roaming grounds. 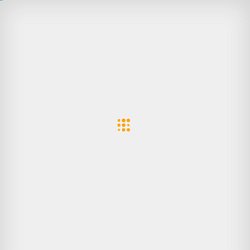 International Union for Conservation of Nature, 2010 The tide is rising for buffalo. New conservation herds appear every couple of years. "Stripes of wildflowers across farm fields could cut pesticide spraying Boosting natural predators of pests that attack cereal crops #agroecology & biological control methods More please...… The European Green Belt is a pan-European ecological network that follows the corridor of the former Iron Curtain for 12,500 kms from the Ba… Ecosystem fragmentation (and loss of dark-skies): Breathtaking ‘Sky Islands’ Showcase Evolution in Action. By Shaena Montanari Photographs by Prasenjeet Yadav Islands are not only in the ocean. 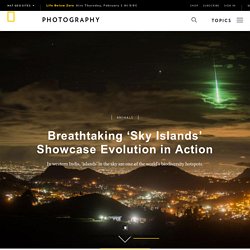 The basic premise of an island, an isolated bit of land surrounded on all sides by an inhospitable substrate, occurs not only in the ocean—but in the sky too. "Sky islands" are the tops of tall mountains that become environmentally isolated from each other even if they are close together, geographically speaking. The Western Ghats are a mountain chain in southwest India home to spectacular and unique sky islands. This mystery has inspired India-based Prasenjeet Yadav, a science photographer and National Geographic explorer, to document the unique biodiversity and highlight the conservation issues through photography.

*****Wildlife corridors M25: How did the deer cross the road ? - Option A. Together with The Community Forest Trusts we plan to create a new #NorthernForest comprising of over 50 million #trees. Read all about it on… Since the turn of the millennium, the Everglades has witnessed the largest ecosystem restoration effort ever attempted… *****Countering ecosystem fragmentation: Bristol student's battle to save Livingstone's fruit bats on brink of extinction. “This species is at a crossroads and will go extinct without help in the near future,” says the Bristol zoologist fighting to save the critically endangered Livingstone’s fruit bat. 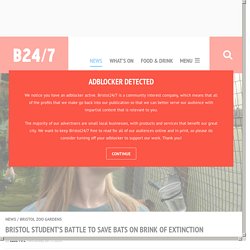 Sarah Richdon is on a one-woman mission to ensure the important species – of which only 1,300 remain in the wild – is not lost forever through pioneering work to create a genetic family tree of captive populations. Her research is something Bristol Zoo has aspired to do for a long time and could significantly help the survival chances of the bats that are under threat from deforestation. “Whereas some people can tell the differences between cars or sports, my area of interest was always animals and so zoology was the obvious career path,” says the PhD student on her chosen area of expertise. “I became interested in Livingstone’s fruit bats after I volunteered for 18 months with Bristol Zoo. Sarah is raising money to fund her pioneering research work “We can make a real difference with this project.

Why the lynx effect would be a boon for Scotland. Make way for the lynx and the bear as ‘rewilding’ projects gather pace across Britain. Trophic cascade & the importance of keystone predators #rewilding #wolves #biodiversity #ecology. Why Do Birds Migrate Like This? *****Reforestation by drones: To help combat mass deforestation, these innovators are are working on a technique they say could plant one billion trees per day.… *****Wildlife corridors: Japanese railroad companies have installed U-shaped tunnels, aiming to help turtles cross train tracks #MitigationMonday.