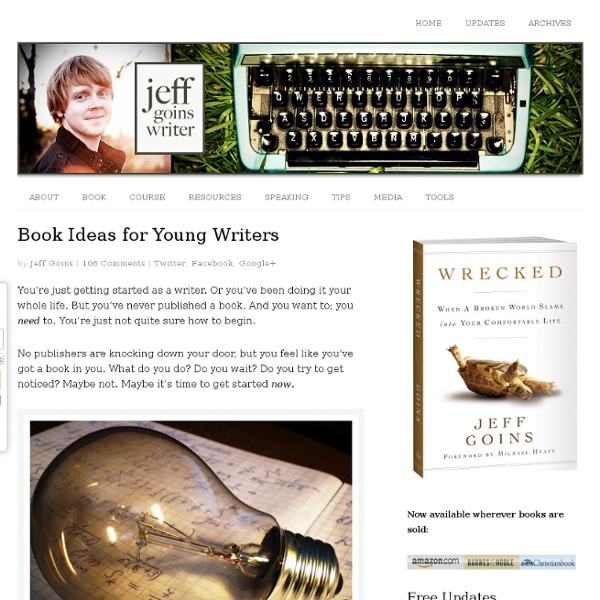 Write Like a Girl (or Guy) If all the characters you create talk exactly like you do, no one but your mom is going to want to read your book—and maybe not even her if you haven't called recently. That's why you need to understand how to write dialogue that sounds authentic, even when your character differs from you when it comes to their age, region, education level, social status, background, personality, and/or gender. Each of these factors plays a role in how a person (real or fictional) speaks, and you need to consider all of them to make your characters’ dialogue sound truly legit. But today we’re focusing on gender. Let’s preface this whole shebang with a disclaimer: Like anything involving differences between sexes, this can be a bit of a touchy subject. The first studies in 1922—not exactly the golden age of feminism—used what linguists call the “deficit” approach, so named because women’s language use was considered deficient compared to men’s.

Horror Story Ideas - Story Writing For Scaring People Horror Story Ideas #11-15 Scary ghost stories and other things that go bump in the night. 11-Rose was quite comfortable with Henry having an imaginary friend, after all, she had had one when she was little and turned out fine. Tom was a little worried about him talking to nothing all the time, but she wasn't. She picked up his clothes and headed to his room; the door was closed, as usual. She opened it just in time to see a checker piece move across the board - by itself. 25 Insights on Becoming a Better Writer When George Plimpton asked Ernest Hemingway what the best training for an aspiring writer would be in a 1954 interview, Hem replied, “Let’s say that he should go out and hang himself because he finds that writing well is impossibly difficult. Then he should be cut down without mercy and forced by his own self to write as well as he can for the rest of his life. At least he will have the story of the hanging to commence with.”

Tension Hook Your Readers With Tension By Laura Backes, Write4Kids.com Tension. Without it, life would be—let's face it—boring. So would fiction. Tension works with conflict to raise the emotional level of the text to a boiling point. It forces the reader to become invested in the story. 6 Ways to Hook Your Readers from the Very First Line Although I consider myself an avid reader, I must admit I have a short attention span when it comes to getting into books. If you fail to grab my attention in the first few lines, I start spacing out. Most readers are like me. Most people don’t want to spend the first 50 pages trying to get into a book. Here are a few things I find annoying in the first lines of a story:

Fifteen Ways to Write a Novel Every year I get asked what I think about NaNoWriMo, and I don’t know how to answer, because I don’t want to say, “I think it makes you write a bad novel.” This is kind of the point. You’re supposed to churn out 50,000 words in one month, and by the end you have a goddamn novel, one you wouldn’t have otherwise. If it’s not Shakespeare, it’s still a goddamn novel. 201 Ways to Arouse Your Creativity Arouse your creativity Electric flesh-arrows … traversing the body. A rainbow of color strikes the eyelids. A foam of music falls over the ears. It is the gong of the orgasm. ~ Anais Nin

15 Ways to Get Paid to Write There’s a really great scene in Sister Act 2 (don’t judge me – that movie’s freaking awesome) where Whoopi Goldberg’s character is telling a very young Lauryn Hill to follow her dreams, quoting a book by poet Rainer Maria Rilke that says “Don’t ask me if you’re a writer. Because I say, ‘If all you can think of in the morning when you get up is writing, then you’re a writer.’” So whether you feel called to writing because of some deep-seated, internal need to communicate with the world and share ideas, or because you simply have the skills to write and want to get paid to do it – you’re a writer! Of course, writing for the sake of writing isn’t what we’re after here. Even if you do want to change the world through the power of the written word, you’ll find that it’s a lot easier to do your writing on a full stomach, in the comfort of your own home than it is if you’re living the starving artist lifestyle. Basically, you want to get paid!

How to write a novel this summer - Toronto Writing Have you always wanted to write a book, but were not sure where to start? Why not gather a group of like-minded writer friends and build your own summer writing camp? Working with a group can keep you motivated, so here are a few tips to spice up the dog days of summer and get the book written.

How to Finish What You Start: A Five-Step Plan for Writers How to finish what you start Do you have a bunch of first chapters tucked away in a drawer – for seven different novels? Is there a folder full of abandoned short stories on your computer? Have you left a trail of abandoned blogs around the internet? Did your ebook fizzle out after a few pages? Most writers have been there … again, and again, and again.