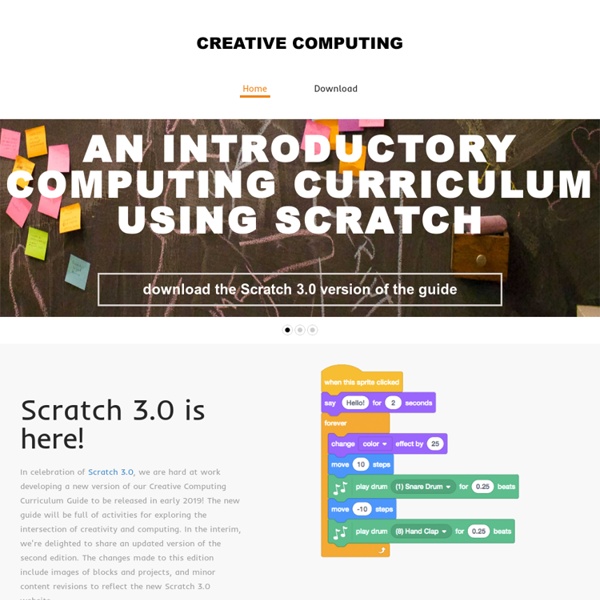 GameMaker Last updated: 02/04/2019 We (meaning YoYo Games Limited, company number 05260718) use technologies on our website and mobile services (which we'll call the Services) to collect information that helps us improve your online experience. We refer to these technologies, which include cookies, collectively as “cookies.” 10 block demos for Scratch Sean McManus shares some 10 block demos that demonstrate popular techniques in Scratch When I first started programming on the Amstrad CPC computer, magazines used to publish short listings. People could use them to learn how to program, and as building blocks for their own programs. One of the magazines had a feature called 10-liners, where programmers were invited to show what they could do in 10 lines of Basic. I thought I'd see what I could do in up to 10 blocks of Scratch, and created a series of program cards. Click the cards below for more information and working demos, and feel free to share the cards on your social media channels or with the Scratch coders in your family, class or club.

The Languages And Frameworks You Should Learn In 2016 Martin Angelov A lot happened in the software development world in 2015. There were new releases of popular programming languages, new versions of important frameworks and new tools. You will find a short list of the new releases that we think are the most important below, together with suggestions for the things we believe would be a great investment of your time to learn in 2016. Computational Thinking In our conversations with Scratchers, we heard young designers describe evolving understandings of themselves, their relationships to others, and the technological world around them. This was a surprising and fascinating dimension of participation with Scratch — a dimension not captured by our framing of concepts and practices. As the final step in articulating our computational thinking framework, we added the dimension of perspectives to describe the shifts in perspective that we observed in young people working with Scratch, which included three elements: expressing: realizing that computation is a medium of creation, "I can create." connecting: recognizing the power of creating with and for others, "I can do different things when I have access to others." questioning: feeling empowered to ask questions about the world, "I can (use computation to) ask questions to make sense of (computational things in) the world."

Why children should NOT be taught to code There is growing enthusiasm for the idea that children should be taught digital coding. Yet what assumptions is this based upon, and how valid are they? In October this year, the BBC will be providing a free pocket-sized computer called the Micro Bit to all one million incoming secondary school students in the UK.

Coding e didattica Upload Barbara Bevilacqua Loading... Download Swift Latest Development Snapshots Development Snapshots are prebuilt binaries that are automatically created from mainline development branches. These snapshots are not official releases. What’s the Difference Between Coding and Computational Thinking? In my last EdSurge article, “Computer Science Goes Beyond Coding,” I wrote about the difference between coding and computer science, to help us understand what we mean by phrases like “Teach kids to code” and “Computer science for all.” In that article and in many other articles, there is another term that appears often: “Computational thinking.” Well, what is Computational Thinking (CT), and how does it differ from Coding and Computer Science—especially when it comes to classroom practice and instruction? What is Computational Thinking (CT)? My short definition: CT is a strategy that uses many of the powerful ideas in computer science to solve problems.

National curriculum in England: computing programmes of study Purpose of study A high-quality computing education equips pupils to use computational thinking and creativity to understand and change the world. Computing has deep links with mathematics, science and design and technology, and provides insights into both natural and artificial systems. The core of computing is computer science, in which pupils are taught the principles of information and computation, how digital systems work and how to put this knowledge to use through programming. Research FUSE Labs - Kodu Game Lab An overview of Kodu. (Click to play) Kodu lets kids create games on the PC and Xbox via a simple visual programming language. Kodu can be used to teach creativity, problem solving, storytelling, as well as programming. Anyone can use Kodu to make a game, young children as well as adults with no design or programming skills. Since Kodu's introduction in 2009, we have visited the White House, teamed up with great groups like NCWIT and DigiGirlz, inspired academic research and been the subject of a book (Kodu for Kids).