Codecademy Releases Its First Educational App, A.K.A. My New Subway Time Killer. Although I write a lot about apps and Internet stuff, I never really learned to code. 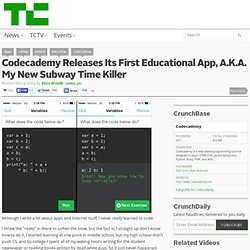 I threw the “really” in there to soften the blow, but the fact is, I straight up don’t know how to do it. I started learning at one point in middle school, but my high school didn’t push CS, and by college I spent all of my waking hours writing for the student newspaper or reading books written by dead white guys. So it just never happened. But it’s on my to-do list. I swear. Today Codecademy made its first foray into the app space and released an intro to coding course designed to take less than an hour to complete. The launch was timed to coincide with Computer Science Education Week, one of the goals of which is to get 10 million students in the U.S. to take an hour of coding. Codecademy for iPhone will eventually be its own independent learning platform, CEO and founder Zach Sims said.

The app is meant to be a super-easy onboarding ramp to future coding. Some of the questions seem ridiculously easy. Hour of Code Offers Coding Tutorials from Bill Gates, Zuckerberg, Etc. Anybody can learn. National Initiative for Cybersecurity Careers and Studies (NICCS) In addition to traditional classroom work, learners can use a variety of online tools and games. 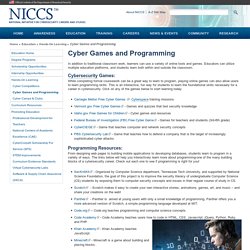 Educators can utilize multiple education platforms, and students learn both within and outside the classroom. Cybersecurity Games: While completing formal coursework can be a great way to learn to program, playing online games can also allow users to learn programming skills. This is an interactive, fun way for students to learn the foundational skills necesaary for a career in cybersecurity.

Click on any of the games below to start learning today. Programming Resources: From designing web pages to building mobile applications to developing databases, students learn to program in a variety of ways. Building Blocks, Robots, and Video Games: One day students are playing a game and the next they are developing it! Minecraft (link is external) - Minecraft is a game about building and placing blocks.Build Your Own Blocks (aka SNAP!)

Open Courses Outside the Classroom: 6 great coding websites and apps for tweens and teens. My daughter's school offered a coding class as one of this year's summer school offerings. 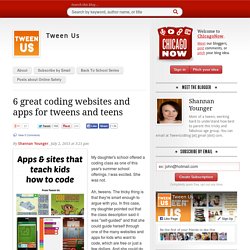 I was excited. She was not. Ah, tweens. The tricky thing is that they're smart enough to argue with you. In this case, my daughter pointed out that the class description said it was "self-guided" and that she could guide herself through one of the many websites and apps for kids who want to code, which are free or just a few dollars. I appreciate the kid's style, and after taking a few other factors into consideration, we talked about how she was going to have to take initiative, stay motivated and all those things that often don't come easily to this age group. At my request, over these first few weeks of summer my tween tried out an assortment of coding websites and apps for tweens and teens. 1. Cost: Free Best for Kids in Grades 6-12 At first, though, she wrote down "little boring" but crossed that off and next to it wrote "Awesome!

" 2. Best for Kids in Grades 2 through 8. How to get started with coding in the classroom - Daily Genius. This probably isn’t news, but coding isn’t just for geeks anymore. 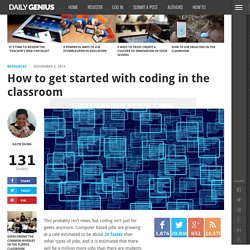 Computer based jobs are growing at a rate estimated to be about 2x faster than other types of jobs, and it is estimated that there will be a million more jobs than there are students to fill them by 2020. Currently, less than 2.4% of college students graduate with a degree in computer science. Filling this gap means that more students need to get involved in STEM subjects early on in their education.

Hour of Code. These are The Skills Students Learn from Coding. January 12, 2014 In his wonderful TED talk " Let's teach kids to code ", Scientist Mitch Resnick made this beautiful analogy : When kids learn to code , it enables them to learn many other things, opens up many new opportunities for learning. 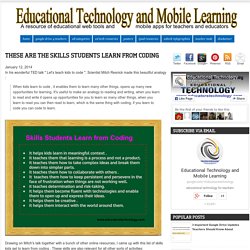 It's useful to make an analogy to reading and writing, when you learn to read and write it opens up opportunities for you to learn so many other things, when you learn to read you can then read to learn, which is the same thing with coding, if you learn to code you can code to learn. Drawing on Mitch's talk together with a bunch of other online resources, I came up with this list of skills kids get to learn from coding .

These skills are also relevant for all other sorts of activities: Here are some of the platforms that bring simple coding lessons to teens and adults. 1- A beginner's guide to HTML and CSS. Best Apps and Websites for Learning Programming and Coding.