Ww2.kqed. Home of Dash and Dot, robots that you can code. EdTech Tutorial: How To Use The App ‘Cargobot’ To Teach Programming – #edtech4beginners. Cargobot is a free App (on the Appstore) which is excellent for learning how to program. 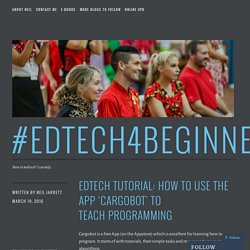 It starts of with tutorials, then simple tasks and moves on to more complex algorithms. How Do I Use Cargobot? First choose the level you want your students to start on. I strongly advise getting them to work through all of the tutorials first. There are some important rules they need to learn i.e. the boxes can not go off the edge of the screen. In addition, as the game progresses, there are more and more complex tools to use and the hints in the tutorial mode will support well with this: How Do I Make A Simple Program?

Let’s have a look at the level ‘Shuffle Sort’. First drag the tools from the toolbox to the program lines. When you are happy with your completed programs, hit the play icon at the bottom of the screen. 15+ Ways of Teaching Every Student to Code (Even Without a Computer) According to Code.org, 90 percent of parents in the U.S. want their children to learn computer science—it will be crucial for many jobs in the near future—but only 40 percent of schools teach it. Critics claim that it is mainly the more affluent schools that offer computer science courses, thus denying those who attend poorer schools the chance to learn necessary skills. A focus on STEM is not enough: Code.org also reports that while 70 percent of new STEM jobs are in computing, only 7 percent of STEM graduates are in computer science.

It is imperative that savvy schools begin to focus some STEM resources on computer science and programming. Scratch - Imagine, Program, Share. How and Why to Teach Your Kids to Code. (5) Programming Languages: In layman's terms, what are the major programming languages, and what are they used for. Ding for kids is as easy as Pi. In an effort to make school-based ICT more than a matter of "MS Word, clip art and web research" a central London primary school held a creative activity day at which 240 children aged five to 11 learnt to write computer code. 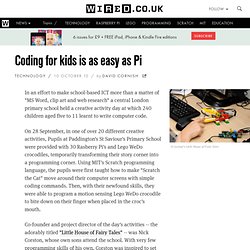 On 28 September, in one of over 20 different creative activities, Pupils at Paddington's St Saviour's Primary School were provided with 30 Rasberry Pi's and Lego WeDo crocodiles, temporarily transforming their story corner into a programming corner. Using MIT's Scratch programming language, the pupils were first taught how to make "Scratch the Cat" move around their computer screens with simple coding commands. Then, with their newfound skills, they were able to program a motion sensing Lego WeDo crocodile to bite down on their finger when placed in the croc's mouth. Co-founder and project director of the day's activities -- the adorably titled "Little House of Fairy Tales" -- was Nick Corston, whose own sons attend the school. 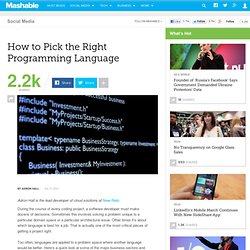 During the course of every coding project, a software developer must make dozens of decisions. Sometimes this involves solving a problem unique to a particular domain space or a particular architectural issue. Other times it’s about which language is best for a job. That is actually one of the most critical pieces of getting a project right. Too often, languages are applied to a problem space where another language would be better. Financial Sector The financial sector benefits from a number of languages.

Another key need in the financial sector is languages that benefit from object-oriented paradigms with strong architectural patterns backed by a lot of guidance from the organizations around the languages. Top Languages: Scala, Java, and C# Agency, Media, Advertising, and Design With the overall design processes needed in creative work, languages that can prototype fast are in high demand. Top Languages: Java and C# Girls Who Code joins forces with Twitter, Google, eBay. It's no secret that there's a lack of women in the tech industry. 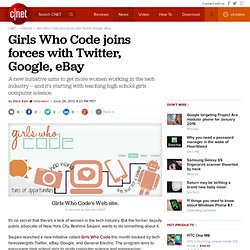 But the former deputy public advocate of New York City, Reshma Saujani, wants to do something about it. Saujani launched a new initiative called Girls Who Code this month backed by tech heavyweights Twitter, eBay, Google, and General Electric. The program aims to encourage high school girls to study computer science and engineering. "Together with leading educators, engineers, and entrepreneurs, Girls Who Code has developed a new model for computer science education, pairing intensive instruction in robotics, web design, and mobile development with high-touch mentorship led by the industry's top female developers and entrepreneurs," the Girls Who Code Web site reads.

According to Saujani, only 3.6 percent of Fortune 500 companies are women-led and less than 10 percent of venture capital-backed companies have female founders. Girls Who Code's first session begins this summer. Understanding Python Decorators in 12 Easy Steps! We Recommend These Resources. 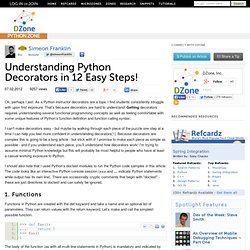