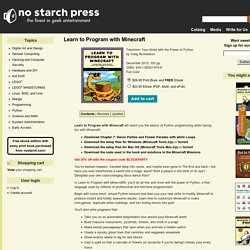 Get 30% off with the coupon code BLOCKPARTY You’ve bested creepers, traveled deep into caves, and maybe even gone to The End and back—but have you ever transformed a sword into a magic wand? Built a palace in the blink of an eye? Designed your own color-changing disco dance floor? In Learn to Program with Minecraft®, you’ll do all this and more with the power of Python, a free language used by millions of professional and first-time programmers! Begin with some short, simple Python lessons and then use your new skills to modify Minecraft to produce instant and totally awesome results. Learn to Program with Scratch. Scratch is a fun, free, beginner-friendly programming environment where you connect blocks of code to build programs. 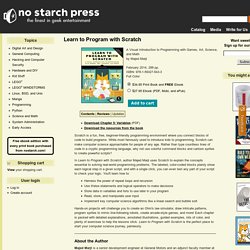 While most famously used to introduce kids to programming, Scratch can make computer science approachable for people of any age. Super Scratch Programming Adventure! "Reveals the power of this deceptively simple programming language . . . 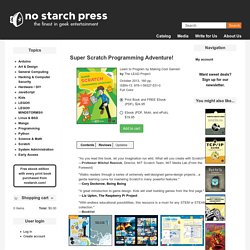 A fun way to learn how to program Scratch, even for adults.” —Mark Frauenfelder, Boing Boing (Read More) Car Chase 3D on Scratch. Multikara manual en. Race%20track%201. The Lost Owls: An Explore-and-Find Game. Under construction | See working version in my Scratch Studio | Resource files | This is an explore-and-find game. 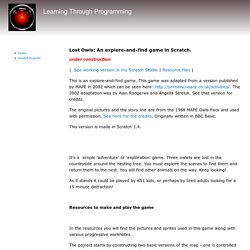 This game was adapted from a version published by MAPE in 2002 which can be seen here: The 2002 adaptation was by Alan Rodgerws and Angella Streluk. See that version for credits. The original pictures and the story line are from the 1988 MAPE Owls Pack and used with permission. This version is made in Scratch 1.4. It's a simple 'adventure' or 'exploration' game.

As it stands it could be played by KS1 kids, or perhaps by tired adults looking for a 15 minute distraction! Resources to make and play the game In the resources you will find the pictures and sprites used in this game along with various progressive worknotes. The pojrect starts by constructing two basic versions of the map - one is controlled from the keyboard the other includes navigation buttons (i.e. mouse controlled). The Parent's Guide To Installing Minecraft Mods. Are your kids desperate to get into mods but you don't know where to start? 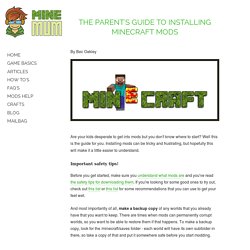 Well this is the guide for you. Installing mods can be tricky and frustrating, but hopefully this will make it a little easier to understand. Important safety tips! Before you get started, make sure you understand what mods are and you've read the safety tips for downloading them. ComputerCraftEdu: Starting to Program. Animation in scratch. Get Hackney Coding Worksheets. CodeCombat - Learn how to code by playing a game. 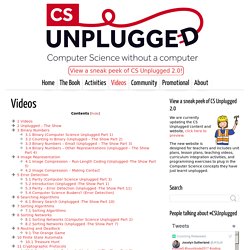 The embedded videos below are from YouTube and are also shown on the individual activity pages. The full collection of videos is available from the CSunplugged channel on YouTube. If you want to download them for playing offline, you can get them from Vimeo. Unplugged – The Show This video introduces a one-hour show that is used to communicate to children what the topic of Computer Science is about. 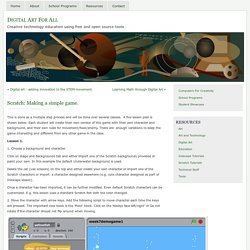 A five lesson plan is shown below. Each student will create their own version of this game with their own character and background, and their own rules for movement/food/enemy. There are enough variations to keep the game interesting and different from any other game in the class. Lesson 1. 1. Click on stage and Backgrounds tab and either import one of the Scratch backgrounds provided or paint your own. Delete the cat (use scissors) on the top and either create your own character or import one of the Scratch characters or import a character designed elsewhere (e.g. cute character designed as part of Inkscape lesson). Once a character has been imported, it can be further modified. 2. Lesson 2 1. In this example a small yellow circle (a simple gold coin) is created and named ‘food’. Set position of character and food, have food disappear when eaten, have character indicate it ate the food. 2. Turtle Graphics with Scratch. Pencil Code. New Minecraft Mod Teaches You Code as You Play.

Like many nine-year-olds, Stanley Strum spends a lot of time building things in Minecraft, the immersive game that lets your create your own mini-universe. 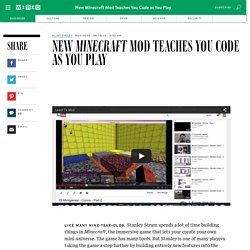 The game has many tools. But Stanley is one of many players taking the game a step further by building entirely new features into the game. And, more than that, he’s also learning how to code. He’s doing this with a tweak to the Minecraft game, called LearnToMod. Modifications like this, called “mods,” are a big part of the game’s runaway success. 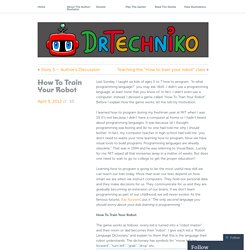 “In what programming language?” You may ask. Well…I didn’t use a programming language, at least none that you know of. In fact, I didn’t even use a computer. Instead, I devised a game called “How To Train Your Robot”. I learned how to program during my freshman year at MIT when I was 19. Learning how to program is going to be the most useful new skill we can teach our kids today.

How To Train Your Robot The game works as follows: every kid is turned into a “robot master” and their mom or dad becomes their “robot”. The goal is for the robots to go through an obstacle course, pick up a ball and bring it back. The fun part begins when each robot retrieves the ball. DrTechniko's Children's Stories and Games. TurtleStitch - Gallery. Basic example: draw a line experiment nr5 snapdragon Flower Design circles. 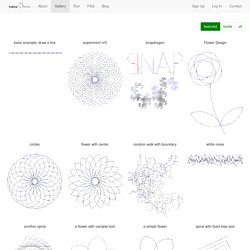