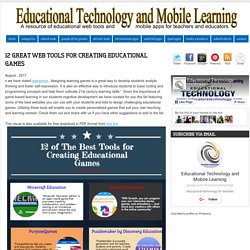 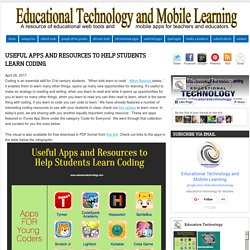 12 Great Books to Help Kids Learn Coding. April 30, 2017 A few days we shared with you this interesting resource featuring some of the best apps and tools to help kids learn everything about coding. 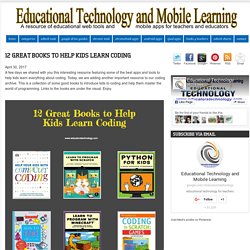 Today, we are adding another important resource to our coding archive. A Good Visual Featuring 10 iPad Apps for Teaching Kids Coding. January 24, 2017 Kids learn best when they are engaged in hands-on activities that challenge their imagination and unleash their creative thinking. 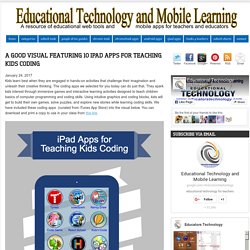 The coding apps we selected for you today can do just that. They spark kids interest through immersive games and interactive learning activities designed to teach children basics of computer programming and coding skills. Using intuitive graphics and coding blocks, kids will get to build their own games, solve puzzles, and explore new stories while learning coding skills. We have included these coding apps (curated from iTunes App Store) into the visual below. Hour of Code Website and App Suggestions for K-8. Here are ideas of apps and websites that teachers in my PLN used successfully in the past during Hour of Code: Kindergarten Start kindergartners with problem solving. 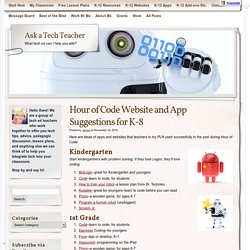 If they love Legos, they’ll love coding BotLogic–great for Kindergarten and youngersCode–learn to code, for studentsHow to train your robot–a lesson plan from Dr. TechnikoKodable--great for youngers–learn to code before you can readPrimo–a wooden game, for ages 4-7Program a human robot (unplugged)Scratch Jr. 1st Grade. Ed Tech Tuesday - Elementary School Library uses ‘Spheros’ to help kids learn programming - Elementary Librarian. I read about this very cool toy robot that is being used to help teach 5th-graders learn about programming. 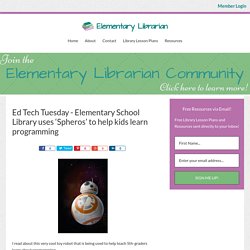 They call it the Sphero SPRKs, these are grapefruit-sized robotic, programmable polycarbonate balls that can be coded to roll in specific patterns. This provides an engaging activity for kids to learn practical uses for geometry and physics. It can be paired to a tablet and has a user-friendly interface that lets a student control it’s movements. This is amazing since most kids are so engrossed with gadgets, and now they can have more fun as they go through their STEM (Science, Technology, Engineering & Math) curriculum. The students’ response in bringing in these spheres of wonder has been met with so much enthusiasm that according to Michele Beddow, they are planning to extend this activity to 3rd and 4th-graders soon. A set of Sphero SPRKs costs $150, and the Mount Olive TWP had invested on 2 sets of these toys for their STEM-related initiatives. 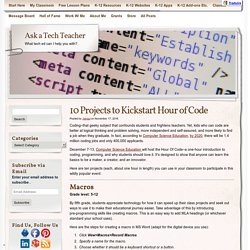 Yet, kids who can code are better at logical thinking and problem solving, more independent and self-assured, and more likely to find a job when they graduate. In fact, according to Computer Science Education, by 2020, there will be 1.4 million coding jobs and only 400,000 applicants. December 7-13, Computer Science Education will host the Hour Of Code–a one-hour introduction to coding, programming, and why students should love it. 15+ Ways of Teaching Every Student to Code (Even Without a Computer) According to Code.org, 90 percent of parents in the U.S. want their children to learn computer science—it will be crucial for many jobs in the near future—but only 40 percent of schools teach it. Critics claim that it is mainly the more affluent schools that offer computer science courses, thus denying those who attend poorer schools the chance to learn necessary skills. A focus on STEM is not enough: Code.org also reports that while 70 percent of new STEM jobs are in computing, only 7 percent of STEM graduates are in computer science.

It is imperative that savvy schools begin to focus some STEM resources on computer science and programming. In my opinion, parents of every student in every school at every level should demand that all students be taught how to code. They need this skill not because they’ll all go into it as a career—that isn’t realistic—but because it impacts every career in the 21st-century world.

5 of The Best iPad Apps for Teaching Kids Coding Through Games. Coding is believed to be the 21st century literacy par excellence. 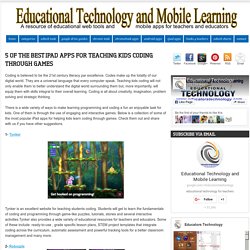 Codes make up the totality of our digital world. They are a universal language that every computer speak. Teaching kids coding will not only enable them to better understand the digital world surrounding them but, more importantly, will equip them with skills integral to their overall learning. Coding is all about creativity, imagination, problem solving and strategic thinking. There is a wide variety of ways to make learning programming and coding a fun an enjoyable task for kids. 8 ways you can empower girls to learn coding. The lack of women and girls in computer science is a well-documented problem. 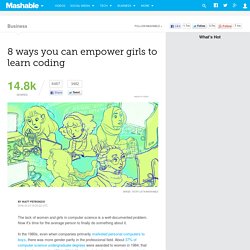 Now it's time for the average person to finally do something about it. In the 1980s, even when companies primarily marketed personal computers to boys, there was more gender parity in the professional field. About 37% of computer science undergraduate degrees were awarded to women in 1984; that number decreased to 18% in 2014. It's estimated only one in every four schools in the U.S. teaches coding, even though 56% of teachers think it should be mandatory. But all these statistics and percentages, and even the general knowledge that there's an issue, can be overwhelming.