Introduction to Algorithms by Miles Berry. Page. Oliver and georges finished presant. Beginner Scratch Projects on Pinterest. Beginner Scratch Projects on Pinterest. Coding for Kids. Delightful robots for children to program. Raspberry Pi in the primary classroom – essential apparel or Emperor’s new clothes? By L.O’Kane With recent reports that sales of Raspberry Pi have surpassed all expectations and reached the 2.5m mark ( should primary schools be using them? 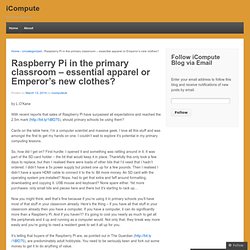 Cards on the table here, I’m a computer scientist and massive geek. I love all this stuff and was amongst the first to get my hands on one. I couldn’t wait to explore it’s potential in my primary computing lessons. So, how did I get on? Now you might think, well that’s fine because if you’re using it in primary schools you’ll have most of that stuff in your classroom already. It’s telling that buyers of the Raspberry Pi are, as pointed out in The Guardian ( are predominately adult hobbyists.

Top Coding and Programming Recommendations for Schools! Last month we had a fantastic discussion on our Facebook page about the changes to the computing curriculum in England from September 2014. 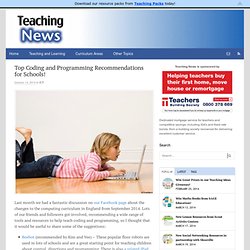 Lots of our friends and followers got involved, recommending a wide range of tools and resources to help teach coding and programming, so I thought that it would be useful to share some of the suggestions: Beebot (recommended by Kim and Vee) – These popular floor robots are used in lots of schools and are a great starting point for teaching children about control, directions and programming. There is also a related iPad app.Lightbot (recommended by Sabeena) – Lightbot is a free online game that also has iOS and Android apps. Players have to program Lightbot and light up all of the blue tiles in the factory.

The game starts with simple programs and then challenges players to create functions. Nic suggested lots of resources too: Computing at School - This free group aims to promote the teaching of computer science at school. CodeCombat. My BIG List of iPad Coding Apps for Kids! December 9-15, 2013 is Computer Science Education Week, and this year their big push is to get coding incorporated into school curriculums everywhere. 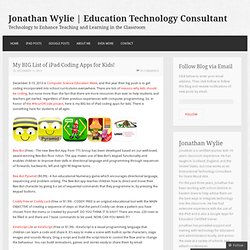 There are lots of reasons why kids should be coding, but none more than the fact that there are more resources than ever to help students and teachers get started, regardless of their previous experiences with computer programming. So, in honor of the #HourOfCode project, here is my BIG list of iPad coding apps for kids. There is something here for students of all ages. Bee-Bot (Free) - The new Bee-Bot App from TTS Group has been developed based on our well-loved, award-winning Bee-Bot floor robot.

The app makes use of Bee-Bot’s keypad functionality and enables children to improve their skills in directional language and programming through sequences of forwards, backwards, left and right 90 degree turns. Bee-Bot Pyramid ($0.99) - A fun educational Numeracy game which encourages directional language, sequencing and problem solving. Site Pages - Programming. Education Apps – Eleven Apps for Coding on Tablets. Updated 15/01/2015 - Apps for Coding on Tablets With an increasing focus on programming and coding finding the way onto the curriculum in many different countries across the globe, developers are creating materials which can help educators skill themselves, and also to support pupils in this area. 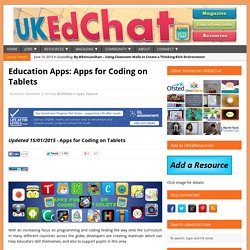 Coding and programming allows for individuals to show their creative side, but also embodies key, logical skills which need to be understood and mastered to create a successful programme. With technology advances racing ahead within societies, the need for programmers is going to be a key concept which individuals need to understand to be able to relate the apps, programmes and any further developments.

The skills are not difficult to learn, but the issue in education is likely to be the confidence, understanding and skills of the teachers who will suddenly find coding or programming within their remit. Code Blast (iPad) £0.79 AndroidScript (Android) Free Kodu (Windows) Free A.L.E.X. Coding-for-kids app Hakitzu Elite launches on Android. When it came out for iPad in March, the Hakitzu: Code of the Warrior app knocked our socks off with its ambition: teaching kids computer programming skills with giant virtual robots. 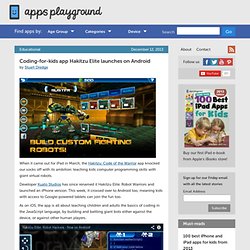 Developer Kuato Studios has since renamed it Hakitzu Elite: Robot Warriors and launched an iPhone version. This week, it crossed over to Android too, meaning kids with access to Google-powered tablets can join the fun too. As on iOS, the app is all about teaching children and adults the basics of coding in the JavaScript language, by building and battling giant bots either against the device, or against other human players. “No previous coding knowledge is required to crack the code! Www.computingatschool.org.uk/data/uploads/CASPrimaryComputing.pdf. Junior Computer Science. Learn to code. Algorithms - Computing ITT & CPD.