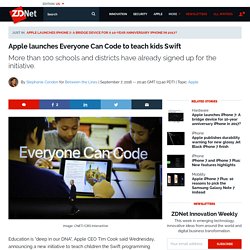 Called Everyone Can Code, the initiative relies on a curriculum built around Swift Playground, the application for budding developers that was unveiled at WWDC earlier this year. Since June, more than 100 schools and school districts around the world have committed to teaching the curriculum this fall, Cook said. Want Your Kids to Build the Next Airbnb, Snapchat, or Uber? Teach Them This Skill.

Forget learning to code: Every employee should know data analysis. “Learn to code.” 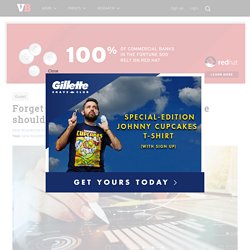 Around the world, it has been a familiar refrain. And the world has duly learned. Time was that the standard in-school computer education was little more than word processing, spreadsheets and some basic programming. When I taught at Cal Poly in the ’80s, undergrads all had to take my class in basic computing. But today’s students, like my son who just graduated from UCLA, all take mandatory programmatic-centric classes. Uk.businessinsider. B.C. announces funding to train teachers to teach coding. B.C. 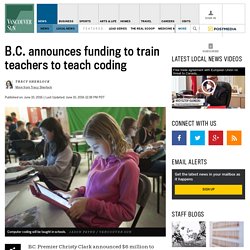 American schools are teaching our kids how to code all wrong — Quartz. Today is the day we switch the system on. 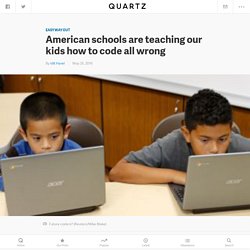 Am I nervous? Of course I am. Please don’t learn to code. Basel Farag Crunch Network Contributor Basel Farag is an iOS Engineer (he thinks). 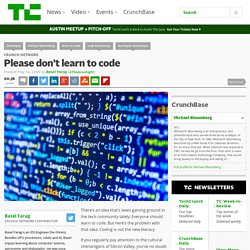 Besides GPU processors, robits and AI, Basel enjoys learning about computer science, astronomy and philosophy. He was once referred to as "the Daft Punk of people," a phrase whose meaning eludes him to this day, but which he's pretty sure is a compliment. Stop Teaching Programming, Start Teaching Computational Thought. School administrators and educators are currently zealous about the idea that every student should learn computer science. 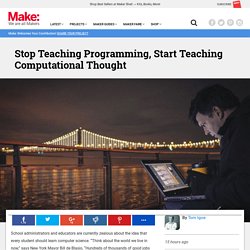 “Think about the world we live in now,” says New York Mayor Bill de Blasio, “Hundreds of thousands of good jobs will be accessible to those with coding and other essential skills.” I agree that everyone should learn to program, but I disagree with Mayor de Blasio’s motivations. You shouldn’t learn to program in order to get a good job. Learning to think computationally can give you a new way to understand and describe your world. Learning to program can make you a more expressive person. Hackathons Aren’t Just for Coders. Facebook recently hosted its 50th hackathon. 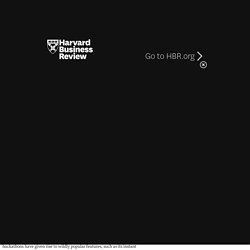 It was the stuff of Silicon Valley lore: Employees from across the company took a break from their regular projects to develop mind-blowing ideas about artificial intelligence over an intense 24-hour period. Late-night thinkers enjoyed a 1AM meal to refuel. Inevitably, not all of the final pitches were winners but, to Facebook, the potential for uncovering groundbreaking innovations is worth pulling a couple hundred engineers away from their everyday tasks.

After all, its past hackathons have given rise to wildly popular features, such as its instant messaging feature Facebook Chat and Instagram’s time-lapse tool Hyperlapse. Learn How To Code For Free Using These Top 10 Coding Lesson Sites. Share on Pinterest In the past half a decade or so there has been a lot of concerted effort to make learning how to code a mainstream thing in the society. 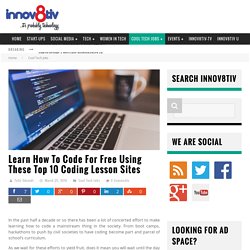 From boot camps, hackathons to push by civil societies to have coding become part and parcel of school’s curriculum. As we wait for these efforts to yield fruit, does it mean you will wait until the day coding lessons become mainstream especially in our public education system? Why Learning To Code Won't Save Your Job. Looking for job security in the knowledge economy? 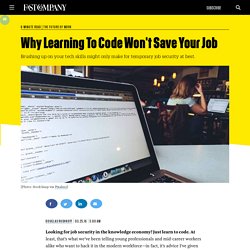 Just learn to code. At least, that’s what we’ve been telling young professionals and mid-career workers alike who want to hack it in the modern workforce—in fact, it’s advice I’ve given myself. And judging by the proliferation of coding schools and bootcamps we’ve seen over the past few years, not a few have eagerly heeded that instruction, thinking they’re shoring up their livelihoods in the process. Unfortunately, many have already learned the hard way that even the best coding chops have their limits. Should Computer Education Cover More Than Just Coding? : NPR Ed. Ammar Al-Kahfah plays with a stuffed "Baymax" toy at the Georgetown Hackathon in Washington, D.C. 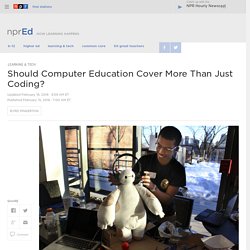 His team has wired it to move and to collect basic medical information. LA Johnson/NPR hide caption toggle caption LA Johnson/NPR. Are Learning Styles Real - and Useful? As noted in Edutopia's Multiple Intelligences brief, Harvard Professor Howard Gardner describes learning styles as how an individual approaches a range of tasks "categorized in different ways: visual/auditory/kinesthetic, impulsive/reflective, right brain/left brain, etc. Gardner calls learning styles 'a hypothesis of how an individual approaches a range of materials.'" Here we present the views of well-respected educators and researchers debating the limitations and utility of learning styles. Harold Pashler, Mark McDaniel, Doug Rohrer, and Robert A. 8 barriers to overcome when learning to code. While being a mentor for a JavaScript Web development course, I’ve seen many beginner programmers jump into learning with enthusiasm and then immediately hitting a wall.

Most of the students usually struggle with the same barriers. But once they learn to overcome them, they get instant benefits: they enjoy the learning experience much morethey make progress fasterthey are more perseverant when getting stuck, thus giving up less easilythey are more independent when writing code So what are these barriers that I’m talking about and how can you overcome them? Before digging into the barriers, I’d like to state how important your motivation is in the learning process. What Exactly Is Needed To Get Your Classroom Coding? In this episode, Jeff sits down with Todd Beard and Sam Patterson to learn how classrooms can take that first leap into the awesome world of Coding. Join us, as we dive into the Hour of Code and Beyond on TeacherCast Podcast 122.

About our Guest Todd Beard has been an educator since 2001 working with students in kindergarten through adulthood. Graduating from the University of Michigan with a focus in education, math, and language arts, he is an educator passionate about technology in learning. In Defense of Learning Code the Hard Way. It's the new year, which means many of us are making resolutions to be better, healthier, less-bad, or just generally more valuable human beings. One popular resolution is (again) learning to code. With an ever-multiplying field of e-learning websites, web dev bootcamps, and other for-profit entities invested in the teaching of coding, this is a continuous, relentless year-round push, but the New Year is a magic time for the cultivation of casual learners.

Learn to code: It's easy! From edX: "Become the genius that designs, controls and powers the digital devices, websites, mobile apps and more that we interact with every day. " It's tempting, right? A Beginner’s Guide to Bringing Coding Into the Classroom. In case you haven’t been paying attention, computer science skills are vastly becoming some of the most in-demand skills of the twenty-first century. In fact, some call it a new "superpower. " But there’s a problem. There are approximately 587,000 computing jobs nationwide, which is growing at 2x the national average, but only about 38,000 computer science students graduated into the workforce this year.

The U.S. Bureau of Labor Statistics predicts that by the year 2020, there will be one million more computer science jobs than graduates prepared for these jobs. My Hour of Code 2015 Collection. With CodinGame, Learning To Code Becomes A Game. Bitsbox Giving Teachers Free Coding Kits for CSED Week. Star Wars. Educational Technology and Mobile Learning: Some Useful Tutorials to Introduce Students to The Basics of coding. 12 Sites That Will Teach You Coding for Free. Coding in the Classroom: 16 Top Resources.

Coding on iPads – Beginner to Pro. Welcome to Forbes. 021 - Coding in the Classroom with Vocareum. 8 barriers to overcome when learning to code. 8 barriers to overcome when learning to code. Kids who code: Why the App Store will soon be dominated by young developers. Can't Code? This iPad App Will Easily Let You Make Your Own Video Game. New Minecraft Mod Teaches You Code as You Play. Coding in the Classroom: 16 Top Resources. Princeton Public Library. Coding in the Classroom: 16 Top Resources. Teaching coding in schools: absolutely necessary or another fad to waste teachers’ time? Ali Partovi: Why Learning to Code Is Imperative In Public Education. An education for the 21st century means teaching coding in schools. Learning to Code Becomes Learning to Learn. Get 500 Free Books on Coding. No-Tech Board Games That Teach Coding Skills to Young Children. Google, Raspberry Pi And O2 To Support UK Schools' Coding.

#KidsCanCode: Teaching Coding Without Tech. How to code in schools: a teacher and student's guide. Teachers in diverse areas are learning how to promote programming. KB...Konnected. Big tech aims at talent shortage with 'Hour of Code' campaign.