Gears Tutorial. A complete tutorial on Lego gears, their advantages and disadvantages as well as the basic laws of mechanics that apply to them. 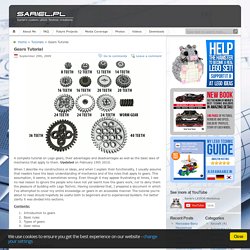 Updated on February 19th 2010. When I describe my constructions or ideas, and when I explain their functionality, I usually assume that readers have the basic understanding of mechanics and of the rules that apply to gears. This assumption, it seems, is sometimes wrong. Even though it may appear frustrating at times, I see no real reason to ignore the people who have not yet learnt how the gears work, nor to deny them the pleasure of building with Lego Technic.

Having considered that, I prepared a document in which I’ve attempted to cover my entire knowledge on gears in an accessible manner. Contents: Introduction to gearsBasic rulesTypes of gearsGear ratiosEfficiencyBacklashAppendixes 1. What do we need gears for? Gears can be obviously used with all kinds of drive, be it an electric motor, a manual crank, a wind turbine, a mill wheel, whatever. 2. 3.

LEGO WeDo 2.0 vs 1.0 - Time to upgrade? LEGO have announced LEGO WeDo 2.0, a new version of their popular educational robotics kits at CES. 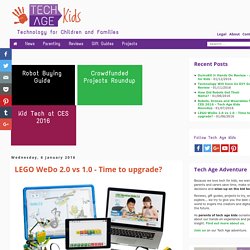 These sets are widely used in primary schools for the teaching of STEM, coding and robotics. The range was due an update. The original version came out in 2009. Although LEGO WeDo is primarily sold to schools it's also popular with some families. Some schools will be deciding whether to upgrade their kits or possibly add more of the older version for consistency. What is LEGO WeDo? LEGO WeDo allows children to add electronics to LEGO models. The kits include LEGO pieces and electronics modules that connect to LEGO. Kids build models and write the code to control them using drag a drop software. LEGO WeDo is pretty costly for the hardware that you get, but it's also fantastic. Note that WeDo is not compatible with LEGO Mindstorms. Power. Lego WeDo - Institute of Robotics & Intelligent System. Our workshop provides students with an introduction to our full programs! 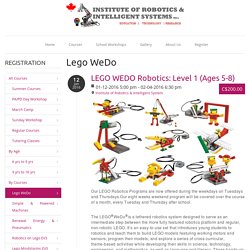 This for students who would like to learn more about our robotics classes, or would like to try it out before committing to the eight weeks program. Students will have the opportunity to create, program and control a robot using the LEGO Mindstorms EV3 kit. This three hours workshop is held every Sunday featuring a different robot. It's a fun packed three hours, and we assure you that you will want to come back! It's up to you, you can come by for another workshop, or join the full eight weeks program. The LEGO®WeDo®is a tethered robotics system designed to serve as an intermediate step between the more fully featured robotics platform and regular, non-robotic LEGO.

Age Group: 5 Years to 8 Years. Lego Wedo with MIT’s Scratch: Simple Robotics for Kids. Lego Wedo Last week my son, who has just turned 6, tried out the Lego Wedo kit that I’ve had sitting in the cupboard until I thought he was ready. 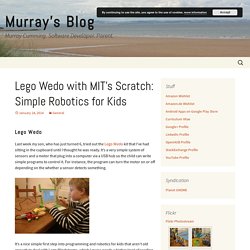 It’s a very simple system of sensors and a motor that plug into a computer via a USB hub so the child can write simple programs to control it. For instance, the program can turn the motor on or off depending on the whether a sensor detects something. It’s a nice simple first step into programming and robotics for kids that aren’t old enough to deal with Lego Mindstorms, which I guess needs a higher level of reading and writing skills. Controlling real objects in the real world is interesting enough to small children. It’s the best equivalent I’ve found for my own first programming experiences with BASIC on the Sinclair ZX81 when I was 8 years old.

Lego Wedo is part of the Lego Education line, which is aimed at schools, and their procurement processes, rather than general consumers. LEGO WeDo Puerto Rico. Wedobots: LEGO® WeDo designs for the busy teacher: From Canada! Employability Skills 2000+ Français The skills you need to enter, stay in, and progress in the world of work—whether you work on your own or as a part of a team. 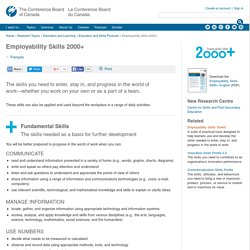 These skills can also be applied and used beyond the workplace in a range of daily activities. You will be better prepared to progress in the world of work when you can: read and understand information presented in a variety of forms (e.g., words, graphs, charts, diagrams) write and speak so others pay attention and understand listen and ask questions to understand and appreciate the points of view of others share information using a range of information and communications technologies (e.g., voice, e-mail, computers) use relevant scientific, technological, and mathematical knowledge and skills to explain or clarify ideas decide what needs to be measured or calculated observe and record data using appropriate methods, tools, and technology make estimates and verify calculations.