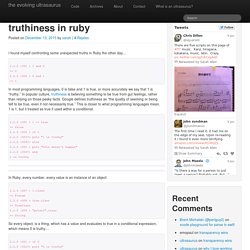 In popular culture, truthiness is believing something to be true from gut feelings, rather than relying on those pesky facts. Google defines truthiness as “the quality of seeming or being felt to be true, even if not necessarily true.” Crafting Ruby. A New Ruby Framework Tutorial: Meet Volt. Volt is a Ruby framework designed for data rich applications. 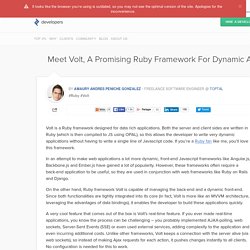 Both the server and client sides are written in Ruby (which is then compiled to JS using OPAL), so this allows the developer to write very dynamic applications without having to write a single line of Javascript code. If you’re a Ruby fan like me, you’ll love this framework. In an attempt to make web applications a lot more dynamic, front-end Javascript frameworks like Angular.js, Backbone.js and Ember.js have gained a lot of popularity. However, these frameworks often require a back-end application to be useful, so they are used in conjunction with web frameworks like Ruby on Rails and Django. On the other hand, Ruby framework Volt is capable of managing the back-end and a dynamic front-end. A very cool feature that comes out of the box is Volt’s real-time feature. Using Volt To Create A Chat Application First of all, let’s install Volt and MongoDB.

Gem install volt brew install mongodb mkdir -p /data/db. Whats you're favorite ruby trick or quirk that most people don't know about. : ruby. Rubyconf2015. Awesome Ruby. Five Ruby Methods You Should Be Using. There's something magical about the way that Ruby just flows from your fingertips. why once said "Ruby will teach you to express your ideas through a computer. 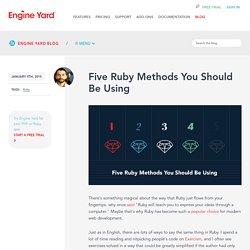 " Maybe that's why Ruby has become such a popular choice for modern web development. Just as in English, there are lots of ways to say the same thing in Ruby. I spend a lot of time reading and nitpicking people's code on Exercism, and I often see exercises solved in a way that could be greatly simplified if the author had only known about a certain Ruby method. Gray Soft / Rubies in the Rough / Iteration Patterns. Iteration Patterns I love studying how the human brain works. 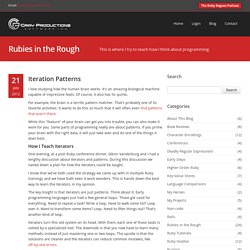 It's an amazing biological machine capable of impressive feats. Of course, it also has its quirks. Find the missing element in a randomized range of numbers - Amin Ariana. I take n consecutive integers, toss one of them out and mix up the remaining n-1 integers as completely unsorted. 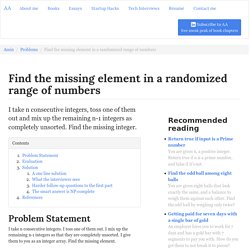 Find the missing integer. Problem Statement I take n consecutive integers. I toss one of them out. I mix up the remaining n-1 integers so that they are completely unsorted. Ruby: inject. I love inject. 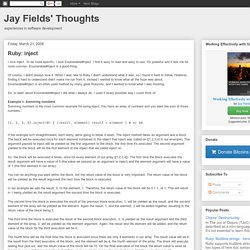 To be more specific, I love Enumerable#inject. I find it easy to read and easy to use. It's powerful and it lets me be more concise. Functional Programming Techniques with Ruby: Part III. In part one of this series, we looked looked at the basics of functional programming and visited, in detail, immutability and side-effect free code. 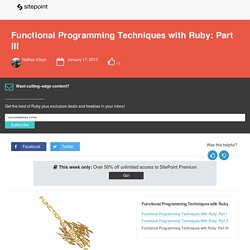 In part two, we explored the concepts of higher-order functions and currying, as well as the myriad of disguises for anonymous functions in Ruby. In this final part of the series, we’re going to investigate recursion and laziness in Ruby, and see just how you can apply these staples of functional programming to your everyday code. Ruby’s Many Loops Chances are, if you’re more than a beginner at programming, you’ll be familiar with the good old fashioned loop. The concept of looping appears early in most programming books, and with good reason: repeating instructions a given number of times is a fundamental principle of efficient coding. What To Do When You're Stuck In Ruby. My experience with debugging code has come a long way. 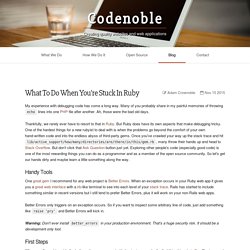 Many of you probably share in my painful memories of throwing echo lines into one PHP file after another. Ah, those were the bad old days. Awesome Ruby. Reddit for rubyists. A Beginner’s Guide To Ruby - HackHands. Ruby is an object-oriented language. 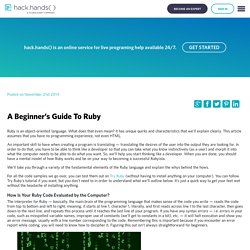 What does that even mean? It has unique quirks and characteristics that we’ll explain clearly. This article assumes that you have no programming experience, not even HTML. An important skill to have when creating a program is translating — translating the desires of the user into the output they are looking for. In order to do that, you have to be able to think like a developer so that you can take what you know instinctively (as a user) and morph it into what the computer needs to be able to do what you want. We’ll take you through a variety of the fundamental elements of the Ruby language and explain the whys behind the hows.

For all the code samples we go over, you can test them out on Try Ruby (without having to install anything on your computer). How Is Your Ruby Code Evaluated by the Computer? Ruby variables. In this part of the Ruby tutorial, we will examine variables in more detail. 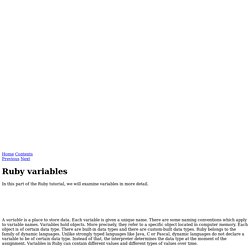 A variable is a place to store data. Each variable is given a unique name. There are some naming conventions which apply to variable names. Variables hold objects. More precisely, they refer to a specific object located in computer memory. . #! The term variable comes from the fact that variables, unlike constants, can take different values over time. Naming conventions. New features in ruby 2.3 - BlockScore Blog. Yesterday ruby 2.3-preview1 was released. This update brings several new additions to core classes in ruby as well as some new syntax. Here are a few of the new additions coming in ruby 2.3: Extract values with Array#dig and Hash#dig The new #dig instance methods provide concise syntax for accessing deeply nested data.

For example: Both of these methods will return nil if any access attempt in the deeply nested structure returns nil: Ruby Quicktips. Creating Static Sites in Ruby with Rack. This article was contributed by Marshall Huss Marshall is the creator of Nezumi, the mobile app for Heroku. Last updated 09 September 2015 markdown This article includes contributions from Lee Reilly.

Full-stack Ruby: build a realtime web app with React.rb and Opal. Opal is a transpiler that converts Ruby code into browser-friendly JavaScript, opening the door for developers to build frontend web applications with Ruby. It’s a particularly intriguing option for backend Ruby developers who want to use the same language across their entire stack. I recently gave Opal a try myself, incorporating it into a simple realtime todo list demo that I built with RethinkDB and Ruby. My demo is a full-stack Ruby application, with Sinatra on the backend and an Opal-based library called React.rb on the frontend. React.rb wraps Facebook’s popular React framework, adapting it to support idiomatic Ruby conventions. Developers can build React components in native Ruby, using a domain-specific language (DSL) to describe the generated HTML markup. After a fair amount of tinkering, I succeeded in making my demo application work as expected. Honeybadger Developer Blog.

The Pragmatic Studio. Thanks to everyone who has picked up a copy of our brand new Elm video tutorial! Since releasing it we've received a bunch of questions and thought we'd roll them all together and answer them here. Q: What is Elm, in under 144 characters? Google Cloud Computing, Hosting Services & Cloud Support - Ruby. Learn Ruby with the Neo Ruby Koans. Ruby language. In this part of the Ruby tutorial, we will introduce the Ruby programming language. Goal. Getting Started with Ruby on Heroku. Introduction. Ruby Glossary. An array is a Ruby data type that holds an ordered collection of values, which can be any type of object including other arrays. Creating arrays.

Ruby Dynamic Methods - Blog @ RohitRox. We define methods using def keywords which is fine for most of the cases. But consider a situation where you have to create a series of methods all of which have the same basic structure and logic then it seems repititive and not dry. Ruby Programming. Learning Ruby methods and how you should use them. What Are Methods and Why Do We Need Them? You'll often have a piece of code that needs to be executed many times in a program.

Instead of writing that piece of code over and over, there's a feature in most programming languages called a procedure, which allows you to extract the common code to one place. Five Ruby Methods You Should Be Using. Ruby Programming/Syntax/Method Calls. RubyMonk - Library. Ruby Variables, Constants and Literals.

Variables are the memory locations which hold any data to be used by any program. Ruby Basic Tutorial. SDET.US. Ruby Quiz. Learn Ruby The Hard Way. _why's Estate. Ruby-Doc.org: Documenting the Ruby Language. A Beginner’s Guide To Ruby - HackHands. Numbers in Ruby: Ruby Study Notes - Best Ruby Guide, Ruby Tutorial. Let's play with Numbers. In Ruby, numbers without decimal points are called integers, and numbers with decimal points are usually called floating-point numbers or, more simply, floats (you must place at least one digit before the decimal point).