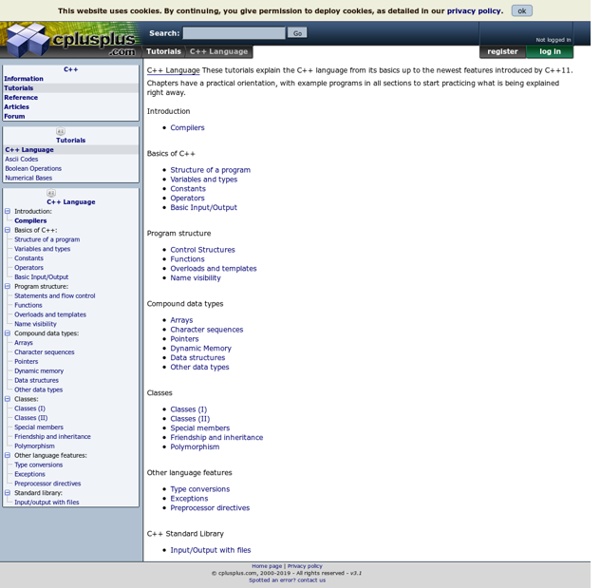 Imagine++: Imagine++ Libraries - version 4.3.2 The most up to date version of this documentation should be on the website: Imagine++ is a set of libraries developed at the Imagine group ( Initially designed for students and beginners, and though it is still easy enough for them, Imagine++ is now used daily by Imagine researchers. It consists in different modules.

Abstract Class vs Interface Introduction: There are lost of discussion on the internet about the Interface vs Abstract class. Also, as base class whether we have to use interface, abstract class or normal class. I am trying to point out few considerations on which we can take decision about Interface vs Abstract class vs Class. C, C++ Programming Tutorials Welcome! If you're new to C++, I recommend you purchase my ebook, Jumping into C++, a complete step-by-step guide for beginners. If you're looking for free tutorials, learn C++ with our C++ tutorial, starting at C++ Made Easy, Lesson 1 (all lessons) If you want to learn C instead, check out our C tutorial C Made Easy, Lesson 1 (all lessons) Want more advanced material on C, C++ graphics, game programming or algorithms?

C++ Interface Classes - An Introduction Class hierarchies that have run-time polymorphism as one of their prominent characteristics are a common design feature in C++ programs, and with good design, it should not be necessary for users of a class to be concerned with its implementation details. One of the mechanisms for achieving this objective is the separation of a class's interface from its implementation. Some programming languages, e.g. Build Your Own External Hard Drive Step 1: Choose the right enclosure Many newer drives employ SATA, which uses a much smaller connector (above). Older IDE drives connect via two rows of pins (below). Consider two key factors when choosing an enclosure: size and interface. Size is easy: If the drive came from a desktop PC, it's probably a 3.5-inch model—though, if it dates from the late '90s, there's a small chance it could be 5.25-inch. Most notebooks, meanwhile, use 2.5-inch drives.

Google C++ Style Guide Definition: Streams are a replacement for printf() and scanf(). Pros: With streams, you do not need to know the type of the object you are printing. You do not have problems with format strings not matching the argument list. (Though with gcc, you do not have that problem with printf either.) Floating point A diagram showing a representation of a decimal floating-point number using a mantissa and an exponent. In computing, floating point describes a method of representing an approximation of a real number in a way that can support a wide range of values. The numbers are, in general, represented approximately to a fixed number of significant digits (the significand) and scaled using an exponent. The base for the scaling is normally 2, 10 or 16.

Templates Overloading operators Classes, essentially, define new types to be used in C++ code. And types in C++ not only interact with code by means of constructions and assignments. They also interact by means of operators. For example, take the following operation on fundamental types: