45 times Clinton pushed the trade bill she now opposes - CNNPolitics.com. President Obama has been pushing hard for the deal, while Democrats in the House of Representatives on Friday revolted and voted against a key part of the legislation. 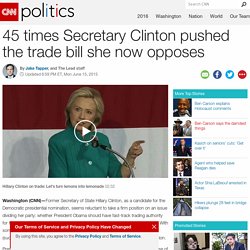 One told me, "there was a very strong concern about the lost jobs and growing income inequality," adding, pointedly: "Ms. Clinton should take notice. " She clearly did. After first dodging the issue, on Sunday in Iowa, Clinton said that "the President should listen to and work with his allies in Congress, starting with (House Minority Leader) Nancy Pelosi, who have expressed their concerns about the impact that a weak agreement would have on our workers, to make sure we get the best, strongest deal possible.

And if we don't get it, there should be no deal. " Clinton said, "there are some specifics in there that could and should be changed. But as members of the Obama administration can attest, Clinton was one of the leading drivers of the TPP when Secretary of State. Elizabeth Warren Report: Decades of Failure to Enforce Labor Standards in Free Trade Agreements. Warren writes: "Again and again, proponents of free trade agreements claim that this time, a new trade agreement has strong and meaningful protections; again and again, those protections prove unable to stop the worst abuses. 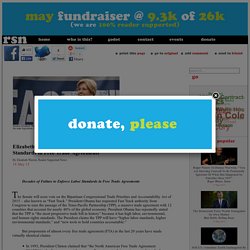 " By Elizabeth Warren, Reader Supported News 18 May 15 Decades of Failure to Enforce Labor Standards in Free Trade Agreements he Senate will soon vote on the Bipartisan Congressional Trade Priorities and Accountability Act of 2015 – also known as “Fast Track.” President Obama has requested Fast Track authority from Congress to ease the passage of the Trans-Pacific Partnership (TPP), a massive trade agreement with 12 countries that account for nearly 40% of the global economy. Elizabeth Warren Details Obama's Broken Trade Promises. WASHINGTON -- Sen. 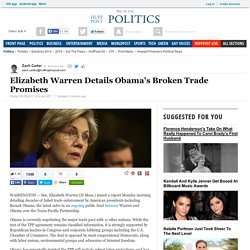 Elizabeth Warren (D-Mass.) issued a report Monday morning detailing decades of failed trade enforcement by American presidents including Barack Obama, the latest salvo in an ongoing public feud between Warren and Obama over the Trans-Pacific Partnership. Obama is currently negotiating the major trade pact with 11 other nations. While the text of the TPP agreement remains classified information, it is strongly supported by Republican leaders in Congress and corporate lobbying groups including the U.S. Chamber of Commerce. The deal is opposed by most congressional Democrats, along with labor unions, environmental groups and advocates of Internet freedom. Obama has repeatedly insisted the TPP will include robust labor protections, and has dismissed Warren's criticisms as "dishonest," "bunk" and "misinformation. " Despite these trade violations, none of these countries has faced significant consequences from the United States government.

Japan now holds more U.S. debt than China - Apr. 15, 2015. Data from the Treasury Department released Wednesday show that Japan owned $1.2244 trillion worth of U.S. government securities at the end of February, compared to $1.2237 trillion for China. 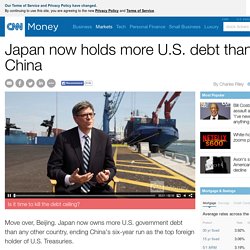 Both countries unloaded U.S. debt during the month of January, but China sold more, making Japan the top U.S. creditor for the first time since the financial crisis. The Treasury data should be taken with a grain of salt: Transactions carried out by other nations on behalf of China and Japan aren't included, making the final tally more of an educated guess. Related: Bubble trouble? China's stock market looks too hot But the Japan-China switch is backed by larger trends, and changes in the way Beijing manages its foreign reserves. China had been buying Treasuries as a way to keep its currency, the yuan, pegged to the U.S. dollar. But in recent years, partly due to U.S. pressure and partly as an effort to curb its own inflation, China has allowed the yuan to rise in value. Senate Cuts Deal To Pass Obama's Secretive Trade Bills. WASHINGTON -- Senate leaders reached a deal Wednesday to push ahead with votes on President Barack Obama's trade deals. 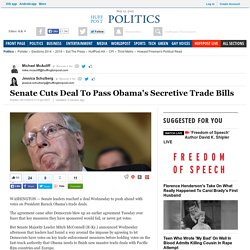 The agreement came after Democrats blew up an earlier agreement Tuesday over fears that key measures they have sponsored would fail, or never get votes. But Senate Majority Leader Mitch McConnell (R-Ky.) announced Wednesday afternoon that leaders had found a way around the impasse by agreeing to let Democrats have votes on key trade enforcement measures before holding votes on the fast-track authority that Obama needs to finish new massive trade deals with Pacific Rim countries and Europe.

"I think that we've come up with something that is fair," Senate Minority Leader Harry Reid (D-Nev.) said. McConnell called the agreement "serious and bipartisan," and said it gave a chance for trade legislation to proceed without allowing "poison pills" to be attached to the legislation. But Sen. Have a tip or story idea to share with us? Push for Pan-Pacific Trade Pact Suffers Blow From U.S. Senate Democrats. 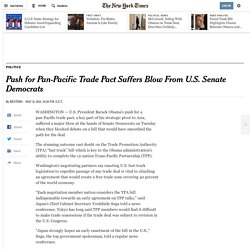 President Barack Obama's push for a pan-Pacific trade pact, a key part of his strategic pivot to Asia, suffered a major blow at the hands of Senate Democrats on Tuesday when they blocked debate on a bill that would have smoothed the path for the deal. Roll Call Vote. Sanders Bernie the trans pacific trade tpp agreement must be defeated.