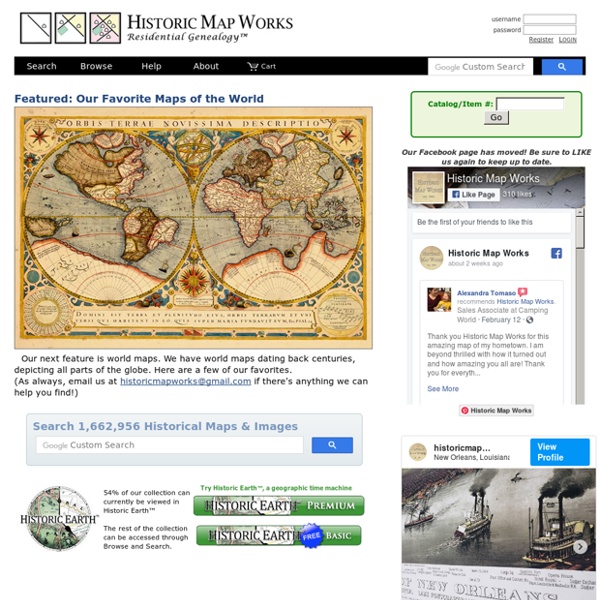 Download 91,000 Historic Maps from the Massive David Rumsey Map Collection Three years ago, we highlighted one of the most comprehensive map collections in existence, the David Rumsey Map Collection, then newly moved to Stanford University. The Rumsey Collection, we wrote then, “contains a seemingly inexhaustible supply of cartographic images”—justifiable hyperbole, considering the amount of time it would take any one person to absorb the over 150,000 physical artifacts Rumsey has amassed in one place. By 2016, Rumsey had made almost half the collection—over 67,000 images—freely available in a digital archive that has been growing since 1996. Each entry features high-resolution scans for specialists (you can download them for free) and more manageable image sizes for enthusiasts; a wealth of data about provenance and historical context; and digital, user-friendly tools that use crowd-sourcing to measure the accuracy of antiquated maps against GPS renderings. To make this document even more compelling, it contains its own bibliography.

Framework interpretation (Genesis) This article focuses on the views of certain Christian commentators and theologians. For a more general account of the topic, see Genesis creation narrative. The framework interpretation (also known as the literary framework view, framework theory, or framework hypothesis) is a description of the structure of the first chapter of the Book of Genesis (more precisely Genesis 1:1-2:4a), the Genesis creation narrative. It can be illustrated with the following table: Genesis 1 divides its six days of Creation into two groups of three ("triads"). The introduction, Genesis 1:1-2, "In the beginning ... the earth was without form and void, and darkness was upon the face of the deep

Join-on-the-go I get a lot of questions about how to join hexagons with the join-on-the-go method. Time for a tutorial. Here we go. The basic pattern for the african flower hexagon can be found in english here >> and in swedish here >> To use the join-on-the-go method, you need to change the middle dc on each side of the hexagon into a chain stitch. Res Obscura: The Most Wonderful Map in the World: Urbano Monte's Planisphere of 1587 At some point in 1589, a Milanese cartographer named Urbano Monte made up his mind: his self-portrait needed updating. Monte carefully crouched over the section of his map that bore his self-portrait from two years earlier — close-cropped sandy hair, a trim beard, modest clothes — and pasted a new self-portrait over it. The resulting double self-portrait (Monte at 43, hidden beneath a new portrait of Monte at 45) testifies to the persistence of male pattern baldness throughout human history.

Genesis creation narrative The Genesis creation narrative is the creation myth of both Judaism and Christianity. It is made up of two parts, roughly equivalent to the first two chapters of the Book of Genesis. In the first part, Genesis 1:1 through Genesis 2:3, Elohim, the generic Hebrew word for God, creates the world in six days, then rests on, blesses and sanctifies the seventh day. God creates by spoken command ("Let there be..."), suggesting a comparison with a king, who has only to speak for things to happen,[2] and names the elements of the cosmos as he creates them, in keeping with the common ancient concept that things did not really exist until they had been named.

Tassel tutorial I use tassels for decorating beanies and bags. This is how I make them. Find something as wide as the finished length of the tassel. I use a ruler. Historical maps home page Down to: 6th to 15th Centuries | 16th and 19th Centuries | 1901 to World War Two | 1946 to 21st Century The Ancient World ... index of places All About Coconut Oil – The Superfood Of All Oils by April McCarthy The health benefits of coconut oil include hair care, skin care, stress relief, maintaining cholesterol levels, weight loss, increased immunity, proper digestion and metabolism, relief from kidney problems, heart diseases, high blood pressure, diabetes, HIV and cancer, dental care, and bone strength. These benefits of oil can be attributed to the presence of lauric acid, capric acid and caprylic acid, and its properties such as antimicrobial, antioxidant, anti-fungal, antibacterial and soothing properties. Coconut oil is used extensively in tropical countries especially India, Sri Lanka, Thailand, Philippines etc., which have a good production of coconut oil. The oil was also once popular in western countries such as United States and Canada; however, there was a strong propaganda in 1970s spread by the corn oil and soy oil industry against coconut oil. How is lauric acid used by our body?

Simple Leather iPod Touch/iPhone Case Can you keep a secret? Santa’s been shopping at the Apple store. So I thought I’d help out with a few handmade stocking stuffers- iPod Touch cases. (My daughters are forbidden to look at my blog until after Christmas, so Shhh!) I searched online for a template, and when I couldn’t find any, I made one myself. Worlds Revealed: Geography & Maps at The Library Of Congress This is a guest post by Kelly Bilz, Librarian-in-Residence in the Geography and Map Division. Even though Latin had fallen out of vernacular use after the fall of Rome (and began to evolve into the modern Romance languages), it lived on in its written form, becoming the lingua franca, so to speak, of scholarship. In particular, western cartographers during the Renaissance used Latin in their maps, resulting in a large collection of maps in the Geography and Map Division written in this ancient language. Seeing these polysyllabic words in a long list of search results can be disorienting; fortunately, being familiar with a couple key terms can help you navigate Latin titles with ease– without having to study Latin for eight years, as I did! Mappa totius mundi : adornata juxta observationes dnn. academiae regalis scientiarum et nonnullorum aliorum secundum annotationes recentissimas. Map by Guillaume de L’Isle and Tobias Conrad Lotter, 1775.

Anti-Inflammatory Diet The Anti-Inflammatory Diet is based on a daily intake of 2,000 to 3,000 calories, depending on your gender, size, and activity level. About 40 to 50 percent of your calories will come from carbs, 30 percent from fat and 20 to 30 percent from protein. Weil suggests striving for a mix of all three nutrients at each meal. Apothecary Label Hand Towels: Free Digital Downloads Hi, I’m Cathe (pronounced the same as Cathy). I’m a graphic designer, crafter, creative blogger, & flea market enthusiast. I live just north of San Francisco in lovely Petaluma, California with my husband, Mr. Wonderful & our 3 awesome teenagers.JustSomethingIMade.com is where I share creative ideas, crafty projects, original designs, artistic inspiration, product reviews and loads of free stuff! Thanks for visiting!