The Best Photos in National Geographic in 2014 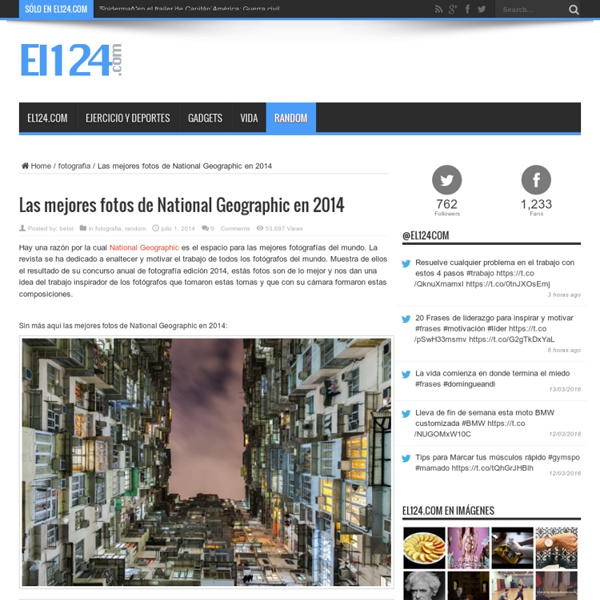 Photos of the Week: 7/26 - 8/1/2014 This week's edition includes a Canadian hitch-hiking robot, a British pier fire, Swiss Alpine wrestling, Irish Bog Snorkeling, German crop circles, and much more. [35 photos] Use j/k keys or ←/→ to navigate Choose: Workers walk down stairs to a parking structure as water cascades down on them on the UCLA campus after flooding from a broken 30-inch water main under nearby Sunset Boulevard inundated a large area of the campus in the Westwood section of Los Angeles on July 29, 2014. The 30-inch (75-centimeter) 93-year-old pipe that broke made a raging river of the street and sent millions of gallons of water across the school's athletic facilities, including the famed floor of Pauley Pavilion, the neighboring Wooden Center and the Los Angeles Tennis Center, and a pair of parking structures that took the brunt of the damage. An MV-22B Osprey aircraft flies in view of downtown Seattle on July 28, 2014.

Powerful Pictures Three sisters pose for photographs taken years apart. A Russian war veteran visits the tank that he fought in which has been preserved as a monument. A child gives a gift to riot police in Bucharest. Photos of the Week: 8/30-9/5/2014 This week we have a look at the West Indian Day Parade in Brooklyn, Ecuador's still-erupting Tungurahua volcano, Iraqi forces taking the battle to ISIS, the massive Jurong Rock Caverns below Singapore, a kitesurfing world record in Spain, and an 82-foot-tall white rabbit in Taiwan, as well as many other subjects. [35 photos] Use j/k keys or ←/→ to navigate Choose: Leng Yuting, 26, poses underwater for her wedding pictures at a photo studio in Shanghai on September 3, 2014, ahead of her wedding next year. Her fiance Riyang said they had their wedding photographs taken underwater because "it's romantic and beautiful." In this aerial view, fountains of lava, up to 60 meters high, spurt from a fissure in the ground on the north side of the Bardarbunga volcano in Iceland on September 2, 2014.

The 18 Best Philosophical Movies of All Time Whether realizing the art form of filmmaking or not, directors and writers often use their preferred visual medium to tell a story. Ideologies, theories or whatever form of message is always decoded in this visual medium in hopes that the audience gets the message. The secret of making a successful film, especially when telling a story, is to avoid preaching.

Amazing Photo Manipulation by Photographer Erik Johansson Swedish photographer and retouch artist Erik Johansson has one of the craziest photography portfolios we’ve ever seen. Erik is completely self-taught in retouching his own photographs to make impossible and extraordinary images. He says his inspiration came from both growing up with a grandmother who painted and having a penchant for escaping into the other worlds of video games, so he naturally blended the two into a technique using computers to generate images that couldn’t be captured by a camera. Check out some of his mind blowing creations below: Cut & Fold – Cut along the dotted line. Drifting Away – A safe place, drifting away.

Photos of the Week: 7/12-7/18/2014 This has been a very eventful week. This edition features images from Ukraine, Israel, and Gaza, as well as other events large and small around the world. From Germany's victory in the World Cup, to Manhattanhenge, the Supermoon, Bastille Day, and much more. [40 photos] News » Pirelli releases Helmut Newton-photographed calendar for 2014 Pirelli releases Helmut Newton-photographed calendar for 2014 Lucire staff/12.55 Helmut Newton It was a pleasant surprise last year when we learned that our own Summer Rayne Oakes modelled for the 2013 Pirelli calendar, photographed by Steve McCurry. Released today, this year’s Pirelli calendar, its 50th anniversary publication, is an even bigger surprise: it is the work of the late Helmut Newton, shot for the company in 1986.