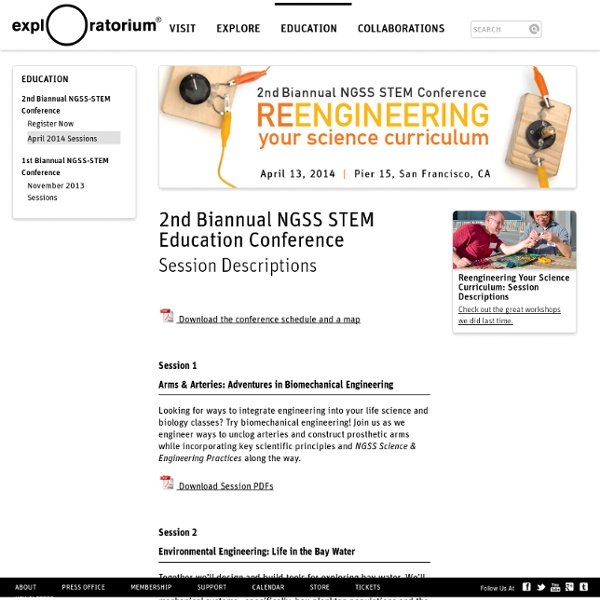 Download the conference schedule and a map Session 1 Arms & Arteries: Adventures in Biomechanical Engineering Looking for ways to integrate engineering into your life science and biology classes? Try biomechanical engineering! Join us as we engineer ways to unclog arteries and construct prosthetic arms while incorporating key scientific principles and NGSS Science & Engineering Practices along the way. Download Session PDFs Session 2 Environmental Engineering: Life in the Bay Water Together we’ll design and build tools for exploring bay water. Session 3 Seismic Engineering Feeling a little shaky on how to teach engineering in your earth science unit? Session 4 Build a Battery of Batteries Come explore the physics and chemistry of simple batteries! Session 5 Build a Better Motor We’ll start by taking apart a spring-powered motor to see how it stores and releases energy, and then we’ll take apart a small electric motor to see how the magnets, wire coils, and electrical connections are arranged.

Anatomy and Physiology Learning Modules - CEHD - U of M Quiz Bowl and Timed Test were retired at the end of summer 2013. Quiz Bowl had always been buggy, as many people had pointed out, and it had become difficult to maintain. It also used technology that doesn’t work on a lot of newer computers or tablets. Timed test depended on a browser add-on that both Microsoft and Apple have encouraged users to remove for security concerns. Discover Browse lessons and activities from EOL and our partners. Lessons and activities include relevant materials, EOL Collections and podcasts that can be used to supplement existing curriculum or on their own. These activities are aimed at upper elementary and middle school students but can be modified for elementary or high school students. Each lesson or activity is aligned to the Next Generation Science Standards (NGSS). Please contact us with feedback or suggestions.

Build a Big Wheel Lesson courtesy of TryEngineering, sponsored by the IEEE. Click here for a .pdf of the original activity. Summary In this activity, teams of students learn about the history and engineering behind big wheels (Ferris wheels) by constructing a working model using pasta, glue, and teabags.

Teacher Resources — Virtual Clinical Trials - About The Series About The Series Players use scientific methods and process skills as they learn the process for designing and conducting a trial, the underlying neuroscience behind the medical advances being tested, and the related careers involved. 2013 Interactive Media Award Virtual Clinical Trials received an Interactive Media Award for Outstanding Achievement. View award

Global Warming Explained, In About A Minute : 13.7: Cosmos And Culture Jean-Pierre Clatot/AFP/Getty Images On a pleasant day in 2011, researchers roamed San Diego's public parks in search of volunteers to fill out anonymous surveys about global warming. In the end about 270 responses were collected from a mix of park visitors and nearby community college students. The researchers wanted to know how well the average American understands the basic processes responsible for global warming, and whether there's a relationship between this basic understanding and the belief that global warming is actually occurring. The results were sobering.

Build a Bobsled Racer Activity adapted from the Museum of Science, Boston‘s Design Challenges, a program of hands-on activities developed to help students and visitors explore the engineering design process, and from the version modified for classroom use by California’s Tech Museum of Innovation. Click on link to view the educator’s guide (.pdf) Summary Teams of students in grades 3 to 8 learn about friction, forces, and the engineering design process by building and testing miniature bobsleds to see which can race down an icy slope either the fastest or slowest.

Activity: Robot Basketball Lesson courtesy of TryEngineering Summary In this activity, students in grades 5 to 12 learn about accuracy and precision by working in teams to design and build a robotic basketball player that can nail three free-throw shots in a row. Build-A-Body Overview Learn about the body's systems with this drag and drop game. Choose organs from the organ tray, and place them in their correct position within the body to create organ systems. Build-A-Body is a drag and drop game where players are tasked with assembling an organ system from a set of organs. Players may then attempt case studies where a functional problem with a system must be linked to the organ affected. Teaching_strategies Natural Hazards• ELI Natural Hazards category Plate tectonicsPlate tectonics - whole concept:-• Partial melting - simple process, huge global impact (ELI+)• Partial melting model and real rock (ELI+)• Plate riding (ELI+)• Plate tectonics through the window (ELI+)• Plate margins and movement by hand Evidence and explanation for the theory:-• Continental jigsaw puzzle (ELI+)• Earth time jigsaw puzzle• Geobattleships (ELI+)• Wegener’s ‘Continental drift’ meets Wilson’s ‘Plate tectonics’ (ELI+)• Did the continents move for you?

Graphing Average Speed with Superworms My favorite lab in our force and motion unit is called graphing average speed with superworms. I’ve done this lab for the last several years in my class, and it’s always a hit with the students. The kids like it because they are working with a live organism, and it really helps solidify the concept of graphing motion. During the lab students record data from the path of superworm (species of darkling beetle). Every 10 seconds for a minute they are responsible for recording the position of the worm. The superworms are great because they don’t travel in a straight line for very long.

CODE BLUE: A Simulation Covering Six Major Body Systems and Important Public Health Issues - Interact Simulations Working in cooperative learning groups, students study a specialty-the circulatory, respiratory, nervous, digestive, muscular/skeletal, and immune systems—and teach their teammates about the inner workings of the human body through self-created visual aids. Research and critical-thinking skills are put into action as students use Code Cards to "see" their first patient and learn about public health issues. The culminating activity has students showcase their knowledge at Grand Rounds, presenting their most compelling cases to parents and students.

Virtual Labs The links on this page are all VIRTUAL LABS offered by the Glencoe textbook company. These labs give the students the adventure of laboratory experimentation without costly supplies, worrisome environmental and safety issues, or time-consuming clean up. They are from all different areas of science: Biology, Physics, Genetics, Earth Science, Physical Science, and Chemistry. Please feel free to try these at home! Students will be directed to specific labs in class but there are over 100 labs offered here!