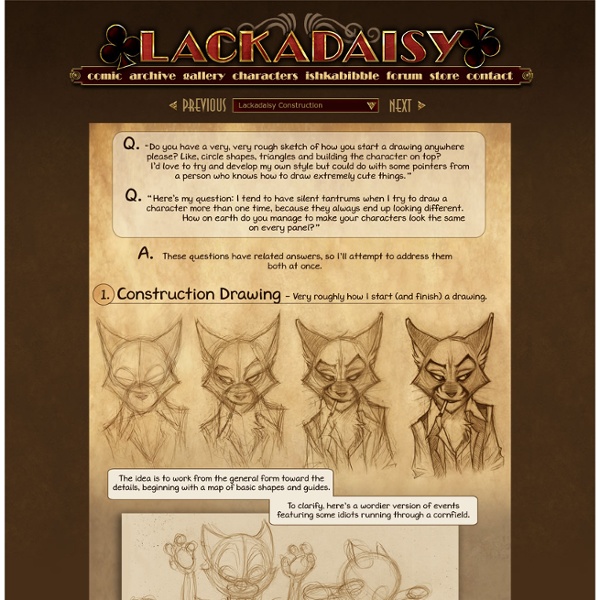 Some notes about construction drawing that may or may not be helpful. This is in response to some questions from my tumblr blog. There are notes about Expressions here, and an old sort of drawing tutorial here that cover some of the same material. I'd also recommend to anyone trying to learn how to draw this way (or any way) to check out Andrew Loomis books. They're old, but are still superior to most of the how-to-draw stuff you can find out there. Furthermore, they're in the public domain now, so they're freely available online. Additionally, the archives of the John K. Legschilla, of course, belongs to the inimitable Der-shing Helmer.

Lackadaisy Expressions Boy, I didn't know what I was getting myself into when I started this. I've had requests for some sort of expressions tutorial dating back a while now, so I figured, "Sure! I can explain expression drawing...and it'll be way better than all those tutorials out there that are nothing but charts of generic expressions. Yeah! Feet Drawing Feet Drawing requires you to be aware of issues such as proportions and main lines. You must also make allowance for the gender and age of your subjects. Feet play an importan part in the expression of a figure. Copying and studing the studies below will help to stimulate your faculties of observation. Beautiful/Decay Cult of the Creative Arts Gabriel Moreno does beautiful work with such basic materials: a pen and a brush. His illustrations begin in black and white, upon which Moreno builds, adding layers of color and images of other places and people tattooed into their skin. Flowers, birds, and faces organically expand from his subjects, as if a rush of creativity, or a dream, is escaping them.

∆DIY∆ Chalkboard Wall Things you need for this DIY: *chalkboard paint *painter's tape Lackadaisy Expressions Boy, I didn't know what I was getting myself into when I started this. I've had requests for some sort of expressions tutorial dating back a while now, so I figured, "Sure! I can explain expression drawing...and it'll be way better than all those tutorials out there that are nothing but charts of generic expressions. Yeah! Just give me a day or two to whip something up..." Um. Rat Creature's Journal - how to draw female comic characters (according to Wizard)... brown_betty asked for examples "to illustrate the exactly how and why female comic characters are illustrated differently than the male." And I thought, really, what's better to illustrate these things than the books teaching the style in the first place? A while ago I posted some scans from Wizard How To Draw series on drawing female superheroes (here and here), and I thought I'd post a bunch more from the first book of the series on "How To Draw: Heroic Anatomy".

How to Think of What to Draw: 23 steps (with pictures) Edit Article Edited by Dvortygirl, Laptop123, Nicole Willson, Random and 41 others Have you been inspired to draw, including getting inspiration from famous artists, or are just doing it for fun? Drawing can often be fun, but sometimes it can be hard to think of ideas for what to draw.

100 Websites You Should Know and Use Entertainment Meet David Peterson, who developed Dothraki for Game of Thrones There are seven different words in Dothraki for striking another person with a sword. Among them: “hliziﬁkh,” a wild but powerful strike; “hrakkarikh,”a quick and accurate strike; and “gezrikh,” a fake-out or decoy strike. A Singular Creation Art Community We would like to ing you this feature tutorial by Linda Bergkvist, renowned in the digital arts community for her gorgeous portrayal of characters. In this tutorial, Linda shows us step by step how she paints realistic eyes. About Linda Bergkvist Linda Bergkvist is a renowned digital artist who currently lives in Sweden. Linda Bergkvist's website can be found at www.furiae.com.

The hand The hands are a notorious source of frustration. This section won't concentrate on the muscle structure, since the hand is very complex in this regard, and knowing this won't help much in drawing them. Instead, we'll look at proportions, range of motion, and possible simplifications. Structure and proportions Figure 2.20. The 101 Most Useful Websites on the Internet Here are the most useful websites on the Internet that will make you smarter, increase productivity and help you learn new skills. These incredibly useful websites solve at least one problem really well. And they all have cool URLs that are easy to memorize thus saving you a trip to Google. Also see: The Best Android Apps