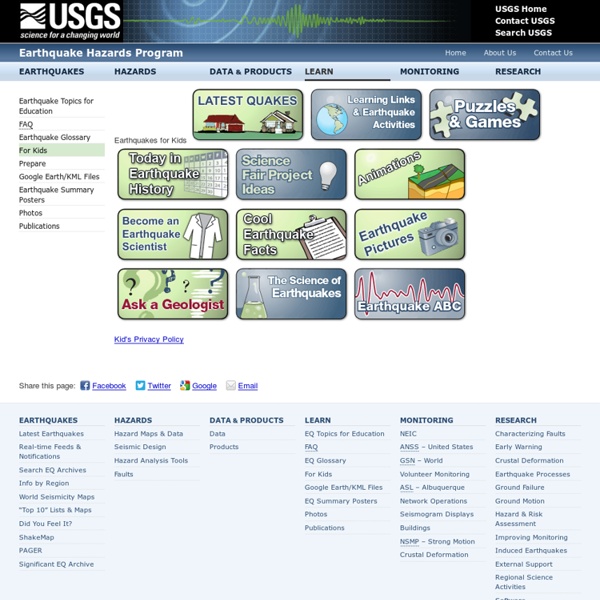 Related:  Resources for Teaching about Earthquakes

Animations for Earthquake Terms and Concepts AmplificationShaking levels at a site may be increased, or amplified, by focusing of seismic energy caused by the geometry of the sediment velocity structure, such as basin subsurface topography, or by surface topography. AsperityAn asperity is an area on a fault that is stuck. The earthquake rupture usually begins at an asperity. AttenuationWhen you throw a pebble in a pond, it makes waves on the surface that move out from the place where the pebble entered the water. The waves are largest where they are formed and gradually get smaller as they move away. This decrease in size, or amplitude, of the waves is called attenuation.

Houghton Mifflin Science: Discover! Simulations: Teacher Support 1. Get Set to Explore Vocabulary earthquake: A violent shaking of Earth's crust, caused by the release of built-up energy along a fault. focus: The point below Earth's surface where the faulting that causes an earthquake occurs. seismic wave: Wave of energy caused by an earthquake. Virtual Earthquake - An Introduction What's an earthquake? Earthquakes occur because of a sudden release of stored energy. This energy has built up over long periods of time as a result of tectonic forces within the earth. Most earthquakes take place along faults in the upper 25 miles of the earth's surface when one side rapidly moves relative to the other side of the fault. This sudden motion causes shock waves (seismic waves) to radiate from their point of origin called the focus and travel through the earth. It is these seismic waves that can produce ground motion which people call an earthquake.

Shaking Things Up: 10 Resources for Exploring Earthquakes Does the anniversary of the 1906 San Francisco earthquake trigger a landslide of questions from your students about why earthquakes happen, what faults are, or if scientists can predict quakes? Explore the science of earthquakes, from the Bay Area and beyond, with the following resources. Educator Guide: Exploring Earthquakes This robust guide is part of Exploring Earthquakes, a rich collection of resources co-presented by the California Academy of Sciences and KQED. This material is also available as a free iBooks textbook and iTunes U course. Earthquake Explainer This media-rich collection includes videos, animations, infographics, quizzes, interviews and other assets that focus on earthquakes in a concise and easy-to-understand presentation.

2014 Napa earthquake continued to creep, weeks after main shock: Continuing seismic activity could pose additional hazards to infrastructure Nearly two years ago, on August 24, 2014, just south of Napa, California, a fault in Earth suddenly slipped, violently shifting and splitting huge blocks of solid rock, 6 miles below the surface. The underground upheaval generated severe shaking at the surface, lasting 10 to 20 seconds. When the shaking subsided, the magnitude 6.0 earthquake -- the largest in the San Francisco Bay Area since 1989 -- left in its wake crumpled building facades, ruptured water mains, and fractured roadways. But the earthquake wasn't quite done.

Quake or Bomb? Seismic Waves Speak Truth, Even If Nations Don&apos;t Last week, North Korea tested what it claimed to be a hydrogen bomb, or as the North Korean government declared in its official statement, an “H-Bomb of justice.” However, it’s not likely that North Korea has actually developed a hydrogen bomb and successfully tested it on 6 January local time (the evening of 5 January on the U.S. East Coast), as announced. The U.S. A Tested, Inexpensive Way to Protect Buildings from Earthquakes — NOVA Next In 1985, construction workers in the southern California city of Rancho Cucamonga put the finishing touches on an unremarkable looking yet revolutionary building. Foothill Communities Law and Justice Center is a four-story courthouse located just 12 miles from the San Andreas fault, the crack in the Earth’s crust responsible for the devastating 7.9 magnitude quake that struck southern California in 1857 and the infamous 1906 earthquake in San Francisco. Geologists think the fault is due for a “big one” with a magnitude that could top 8.0. If and when that comes, the Foothill Communities Law and Justice Center will be prepared, not because it’s anchored in stone, but because sits atop its foundations on pads of rubber. The Foothill Communities Law and Justice Center in Rancho Cucamonga, California

Earthquake Intensity- Incorporated Research Institutions for Seismology What controls the shaking you feel during an earthquake? We compare a light bulb to an earthquake to clarify the difference between magnitude and intensity, two concepts that are often used interchangably, but in error. Though both are related to a measured earthquake, intensity reflects what is felt during an earthquake at many locations, and the magnitude is a single measured value.

Cloaking Buildings from Earthquakes and Tsunamis — NOVA Next In August 2012, civil engineers from the French firm Menard drilled three rows of shallow holes into the soft clay soil at the base of the Alps near Grenoble. Each hole was roughly the depth and diameter of what a utility company might dig to secure the base of a telephone pole. Then, on one side of the boreholes, they lowered a vibrating probe several feet into the soil. On the surface, they placed a network of sensors to record vibrations.

Looks great Gaby, I've 'picked' it for my tree too! by missfelicity Apr 23