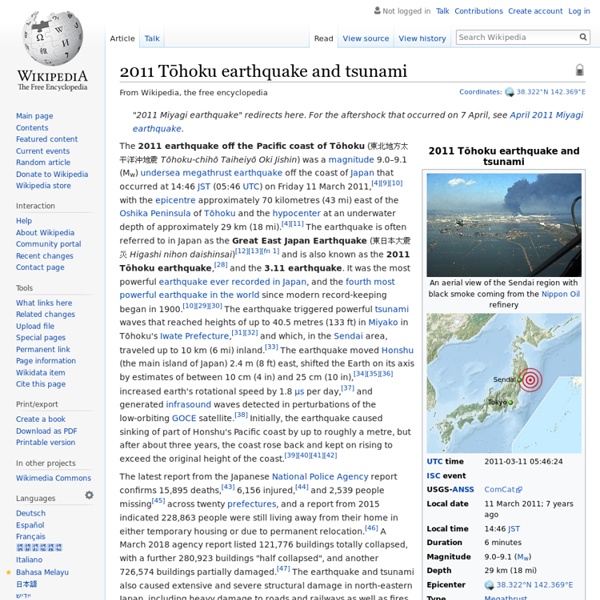 The 2011 earthquake off the Pacific coast of Tōhoku (東北地方太平洋沖地震, Tōhoku-chihō Taiheiyō Oki Jishin) was a magnitude 9.0–9.1 (Mw) undersea megathrust earthquake off the coast of Japan that occurred at 14:46 JST (05:46 UTC) on Friday 11 March 2011,[4][9][10] with the epicentre approximately 70 kilometres (43 mi) east of the Oshika Peninsula of Tōhoku and the hypocenter at an underwater depth of approximately 29 km (18 mi).[4][11] The earthquake is often referred to in Japan as the Great East Japan Earthquake (東日本大震災, Higashi nihon daishinsai)[12][13][fn 1] and is also known as the 2011 Tōhoku earthquake,[28] and the 3.11 earthquake. Early estimates placed insured losses from the earthquake alone at US$14.5 to $34.6 billion.[53] The Bank of Japan offered ¥15 trillion (US$183 billion) to the banking system on 14 March in an effort to normalize market conditions.[54] The World Bank's estimated economic cost was US$235 billion, making it the costliest natural disaster in history.[55][56] Japan

Yamaguchi-gumi The Sixth Yamaguchi-gumi (六代目山口組, Rokudaime Yamaguchi-gumi?) is Japan's largest and most infamous yakuza organization. It is named after its founder Harukichi Yamaguchi. Its origins can be traced back to a loose labor union for dockworkers in Kobe before World War II.[2] The Yamaguchi-gumi are among the world's wealthiest gangsters, bringing in billions of dollars a year from extortion, gambling, the sex industry, arms and drug trafficking, and real estate and construction kickback schemes. They are also involved in stock market manipulation and Internet pornography. The Yamaguchi-gumi has its headquarters in Kobe, Japan, but it operates all across Japan and has overseas operations in Asia and the United States. Leadership[edit] 1st kumicho (1915–1925): Harukichi Yamaguchi2nd kumicho (1925–1942): Noboru Yamaguchi — son of Harukichi Yamaguchi3rd kumicho (1946–1981): Kazuo Taoka When Taoka inherited the title of kumicho, it was merely a local family with only a few dozen members.