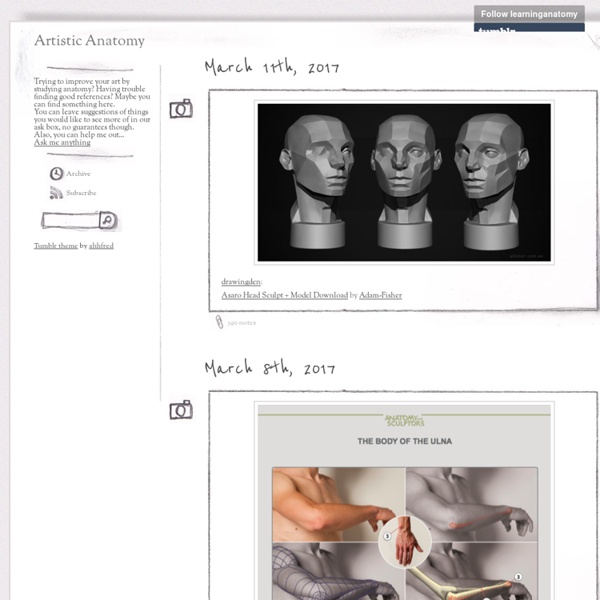 Is learning to draw anatomy in a classroom more secure (since there is a teacher to check the work and possibly a book to study from) in practicing artistic anatomy drawing, or should artists focus on just practicing from images on websites/blogs like this tumblr? Asketh - pjmx24 Depending on the size of your class and where you are, your teacher can be a great guide to help you and show you what areas you need to focus on more to improve and give you good material to work from! If your class size is too big (ideally a class of no more than 15 is optimal for a teacher to give extensive feedback to all students) you might not get enough feedback to really improve as much as possible to your full potential. Outside of class (or if you have no class) you should focus on drawing in a sketchbook dedicated for life drawing/anatomy. Even a page a week of studying will help you improve. Hope that gives you some insight!

How to Draw Eyes: 25 Tutorials, Step-by-Steps, How-To’s and Reference Photos on How to Draw Human Eyes 9 Comments | August 11, 2011 Eyes… the window into the soul as they say. Below is a collection of resources on how to draw eyes to help you make sure your drawings have soul. Have fun! Tutorials Art References: Archive Watts Atelier of the Arts Drawing Program Developing a solid foundation in drawing is the key to a successful career in art. In the Drawing Program you can learn Fundamentals, Head, and Figure at your own pace. You can also enroll in one of the mentorship programs and receive weekly critiques.

Are we all born with synaesthesia? – Shruti Ravindran Vladimir Nabokov once called his famed fictional creation Lolita ‘a little ghost in natural colours’. The natural colours he used to paint his ‘little ghost’ were especially vivid in part because of a neurological quirk that generated internal flashes of colour whenever letters of the alphabet appeared within his mind. In his memoir Speak Memory (1951), he described a few of them: ‘b has the tone called burnt sienna by painters, m is a fold of pink flannel, and today I have at last perfectly matched v with “Rose Quartz” in Maerz and Paul’s Dictionary of Color’. The condition he had was synaesthesia, a neurological oddity that mixes up the senses, making those who possess it see as well as hear music, or taste the shapes they set their eyes upon. Synaesthetes such as Nabokov see letters and numbers wreathed in fixed, seemingly idiosyncratic colours. Grapheme-colour synaesthesia, the term for this variety, is the most common sub-type of synaesthesia, occurring among four people in 100.

Art Inspired / Value and Tone Value is a quality of colour, how light or dark that colour is. If you took a black-and-white photograph of the colour, what shade of gray would you get? That's value, also known as tone. Chiaroscuro Pencil Shading Exercise (worksheet provided) How To Draw A Human Figure - Drawing The Figure From Your Mind Hello and today we are going to learn how to draw the human figure from imagination. We’re going to start out by drawing a simple human stick figure. When trying to draw a figure from your mind, it is very helpful to first draw a simple stick figure that you can build on. It is very similar to when a sculptor is creating a figure statue out of clay. He will first create a skeleton figure out of metal wires that he can then add clay to. How to draw a head: master the 8 most common angles Learning how to draw a head is no easy feat. But as a story artist – or any aspiring artist – you should be able to draw characters from any angle, so mastering this skill is vital. While there are an almost infinite number of angles to choose from, there are some that come up regularly in the visual storytelling process. This short lesson will cover what these angles are, and break down how to draw a head from those angles – so grab your best pencils and follow along.

Here is an Artist's Guide to Drawing the Human Head We are fierce believers that drawing the human face takes practice, but it isn’t work. That is because there are rules to follow and an effort to put behind it, but the process isn’t anything but something to revel in if you have artistic leanings. So enjoy more than a dozen tips on drawing the human head from one of our favorite artists Paul Leveille and then see about further embarking on a portraiture voyage with the sketches and insights from Everett Raymond Kinstler, a seasoned expert whose book, Impressions and Observations, is a must-have for learning artists. First, It’s Not a Race I drew The Fisherman in pencil on Canson heavyweight drawing paper. Canson drawing paper has a strong texture that I enjoy working on.