Rat Creature's Journal - how to draw female comic characters (according to Wizard)... 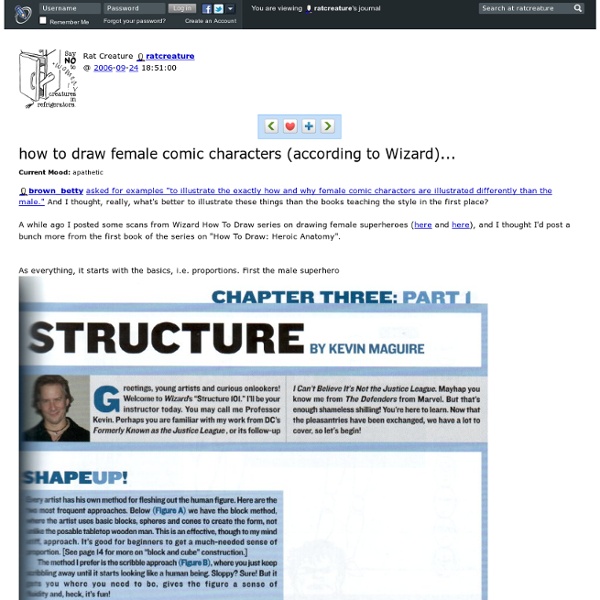 brown_betty asked for examples "to illustrate the exactly how and why female comic characters are illustrated differently than the male." And I thought, really, what's better to illustrate these things than the books teaching the style in the first place? A while ago I posted some scans from Wizard How To Draw series on drawing female superheroes (here and here), and I thought I'd post a bunch more from the first book of the series on "How To Draw: Heroic Anatomy". As everything, it starts with the basics, i.e. proportions. The female example is similar, but slightly different, notice how he stands firm and straight, wheras she stands with her hips cocked a little and the leg thrust forward? Also notice in the direct torso comparison below, how the male one is ramrod straight, but she curves and leans just a little bit in the same pose? Now onwards to the chapter "Sultry Women". Next, Michael Turner explains "Sex Appeal".

Feet Drawing Feet Drawing requires you to be aware of issues such as proportions and main lines. You must also make allowance for the gender and age of your subjects. Feet play an importan part in the expression of a figure. Copying and studing the studies below will help to stimulate your faculties of observation. A man's foot is approximately 1/6th of his own body. These are drawings of male feet: A woman's foot is about 1/8th of the lenght of her own body. The widest part of a person's foot is just as wide as the widest part of his/her hand. Note the direction lines of the ankles and the toes. Make sure you get sufficient depth from the arch to the instep when drawing a foot. These are drawings of female feet: Children's feet are good to study because they have not been distorted by shoes too much. In chidren the arch of their feet is usually more pronounced. The toes are also more separated than in adult feet, givine grace to the foot. In drawing from nature, sketch only parts if the children move too much.

idrawdigital - Tutorials for Drawing Digital Comics the Figure Drawing LAB - StumbleUpon striving to be delicious Simplify Human Anatomy guide by =sakimichan on deviantART How to Draw the Head From Any Angle | Stan Prokopenkos Blog - StumbleUpon The Basic Forms To draw the head from any angle you must first understand its basic structure. Look past all the distracting details and visualize the underlying forms. This ability to simplify can be applied to the features of the face, but when starting the drawing you could look even further. Ignore even the features and simplify to the most basic form of the head. I use a method taught by Andrew Loomis in his book, “Drawing the Head & Hands”. The head deconstructed into its basic forms, is a sphere as the cranium and a block as the jaw and cheek bones. A Sphere as the Cranium The sides of the head are flat, so we can slice off a piece from both sides of the ball. A Block as the Jaw and Cheek Bones Attach the shape of the jaw. Constructing From Any Angle Step 1 – Determine the angle of the ball The angle of the head is established at the very beginning of the drawing with the ball. X Axis - The up and down tilt is established by the angles of the horizontal and vertical lines in the oval.

A Bunch of Tutorials Knite: Chapter 1 by