How Much Is A User Valued Out? Axel Springer acquires majority stake in kaufDa mobile coupons startup for $40 million. KaufDa is one of Germany’s leading “promotion search” sites. 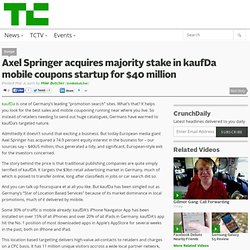 What’s that? It helps you look for the best sales and mobile couponing running near where you live. So instead of retailers needing to send out huge catalogues, Germans have warmed to kaufDa’s targeted nature. Admittedly it doesn’t sound that exciting a business. But today European media giant Axel Springer has acquired a 74.9 percent equity interest in the business for – our sources say – $40US million, thus generated a tidy, and significant, European-style exit for the investors concerned. The story behind the price is that traditional publishing companies are quite simply terrified of kaufDA. And you can talk up Foursquare et al all you like.

This location based targetting delivers high-value ad-contacts to retailers and charges on a CPC basis. Launched in January 2009, it was founded in late 2008 by recent college graduates Thomas Frieling, Tim Marbach and Christian Gaiser. Dr. Valuations: What are the benchmarks and factors on which one produces a valuation for a social gaming startup.

Friendfeed. Twitter funding. Foursquare. TVtrip. Gowalla. Etsy. To be continued. Evernote Reaches Two Million Lifeloggers, Half Of Them Are On Th. The idea of a life recorder that captures every moments of your life on video is still a bit of a tech fantasy, but an early version of the life recorder already exists. 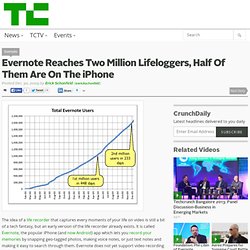 It is called Evernote, the popular iPhone (and now Android) app which lets you record your memories by snapping geo-tagged photos, making voice notes, or just text notes and making it easy to search through them. Evernote does not yet support video recording other than as an attachment (for premium subscribers), but when that becomes more practical it will. “Evernote is definitely positioned to be the lifelogging tool of choice,” says CEO Phil Libin. “That ambient video capture was my original plan for Evernote—always recording, not storing, you bookmark it—that is exactly what we want to do.” Next year Evernote will introduce voice search, which will be a big step towards that ultimate vision (if you can search audio, you can search through what was said in videos).

Looking at new users per day is more instructive. Done deal: Critical Path acquires Shozu, CEO Chris Wade stays on. Our earlier report about Critical Path buying mobile services startup ShoZu turns out to have been right on the money. 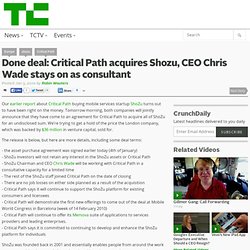 Tomorrow morning, both companies will jointly announce that they have come to an agreement for Critical Path to acquire all of ShoZu for an undisclosed sum. We’re trying to get a hold of the price the London company, which was backed by $36 million in venture capital, sold for. The release is below, but here are more details, including some deal terms: ShoZu was founded back in 2001 and essentially enables people from around the work to connect with other people by exchanging video, pictures and commentary between mobile devices and social networks, photo sharing sites and information resources.

LivingSocial Creator Takes New $5M Round – GigaOM. HootSuite Raises $1.9 Million For Social Media Dashboard. How eBuddy’s Mobile Monetization Strategy Helped It Turn A Profi. For the past four months, Amsterdam-based eBuddy has turned a profit, CEO Jan-Joost Rueb tells me, by offering advertising-supported services for free in combination with sales of a premium iPhone application. 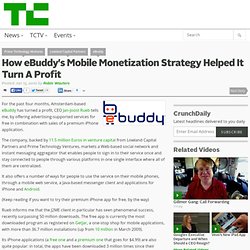 The company, backed by 11.5 million Euros in venture capital from Lowland Capital Partners and Prime Technology Ventures, markets a Web-based social network and instant messaging aggregator that enables people to sign in to their service once and stay connected to people through various platforms in one single interface where all of them are centralized. It also offers a number of ways for people to use the service on their mobile phones, through a mobile web service, a Java-based messenger client and applications for iPhone and Android. (Keep reading if you want to try their premium iPhone app for free, by the way) Rueb informs me that the J2ME client in particular has seen phenomenal success, recently surpassing 50 million downloads.

Eyeka raises €3 million for crowd-sourcing ad campaigns. [France] Eyeka, which connects brands and creative consumers, has raised €3 million in a second round of financing. 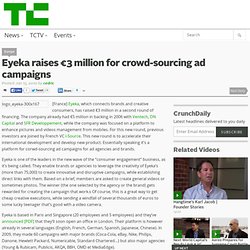 The company already had €5 million in backing in 2006 with Ventech, DN Capital and SFR Developpement, while the company was focused on a platform to enhance pictures and videos management from mobiles. For this new round, previous investors are joined by French VC I-Source. This new round is to accelerate their international development and develop new product. Essentially speaking it’s a platform for corwd-sourcing ad campaigns for ad agencies and brands.

Eyeka is one of the leaders in the new wave of the “consumer engagement” business, as it’s being called. 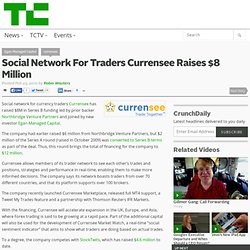 The company had earlier raised $6 million from Northbridge Venture Partners, but $2 million of the Series A round (raised in October 2009) was converted to Series B terms as part of the deal. Thus, this round brings the total of financing for the company to $12 million. Currensee allows members of its trader network to see each other’s trades and positions, strategies and performance in real-time, enabling them to make more informed decisions.

The company says its network boasts traders from over 70 different countries, and that its platform supports over 100 brokers. The company recently launched Currensee Marketplace, released full MT4 support, a Tweet My Trades feature and a partnership with Thomson Reuters IFR Markets. To a degree, the company competes with StockTwits, which has raised $4.6 million to date.