UPDATED: 162 Documentaries To Expand Your Consciousness 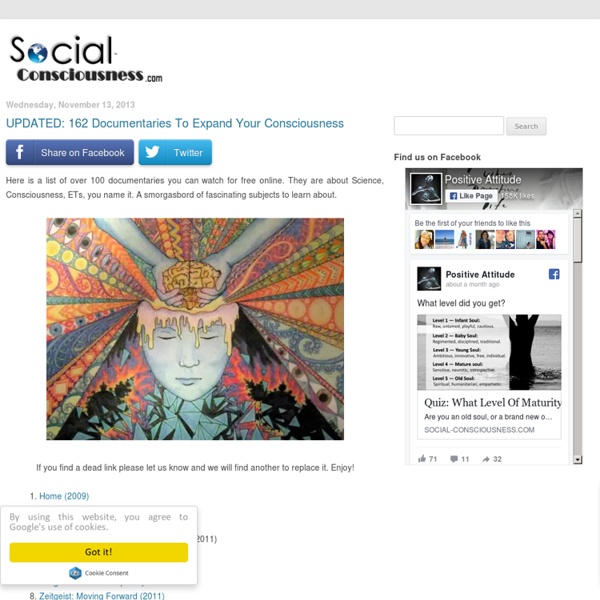 Here is a list of over 100 documentaries you can watch for free online. They are about Science, Consciousness, ETs, you name it. A smorgasbord of fascinating subjects to learn about. If you find a dead link please let us know and we will find another to replace it. Enjoy! 1. Credits: OpenBoxThinking & Altering-Perspectives

Eckhart Tolle Describes Two Simple Exercises To Help You Live In The Now Spiritual teacher Eckhart Tolle believes in the practice of staying present. The author of A New Earth and The Power of Now acknowledges the challenge of this effort in the fast-paced culture of today, but also offers two shockingly simple exercises that anyone can do to truly live in the now -- anywhere, at any time. During the television debut of "Oprah and Eckhart Tolle: A New Earth," a 10-part series presented by "Super Soul Sunday," Tolle explains how people can condition themselves to slow down and appreciate the present. It all begins with one question.

Brain scans predict which criminals are more likely to reoffend Doug Menuez/Getty Activity in a particular region of the cortex could tell whether a convict is likely to get in trouble again. In a twist that evokes the dystopian science fiction of writer Philip K. Voynich manuscript The Voynich manuscript is an illustrated codex hand-written in an unknown writing system. The vellum on which it is written has been carbon-dated to the early 15th century (1404–1438), and may have been composed in Northern Italy during the Italian Renaissance.[1][2] The manuscript is named after Wilfrid Voynich, a Polish book dealer who purchased it in 1912.[3] Some of the pages are missing, but about 240 remain. The text is written from left to right, and most of the pages have illustrations or diagrams.

What Really is Self-Realisation?...and How Can it Help You Drink the Juice of Life? 23rd January 2015 By Open Contributing Writer for Wake Up World We read about ‘self-realisation’ in spiritual circles, but what really does that mean? New study reveals how time could run BACKWARDS in a parallel ‘multiverse’ In an alternate universe, the arrows of time could run in the opposite direction of what we know, unfolding so that our known past exists during the far-off future of a distant world. A pair of scientists from the California Institute of Technology and the Massachusetts Institute of Technology who suggest this concept aren't the first to do so, but they've demonstrated how this phenomenon could arise based on simpler principles than previously examined. Using entropy as the basis for their model, the physicists have developed a way to show the spontaneous appearance of the arrows of time, and how they can flow in opposite directions. In the multiverse, pictured above, parallel universes could exist, with time running in opposite directions.

My Visit To Evernote Headquarters Last week, I got to visit Evernote‘s headquarters in Redwood City, California. Evernote brought all of its ambassadors out for a kind of training/meetup and it was a unique experience. As I mentioned last week, it was a whirlwind trip for me. I got on a plane to San Francisco at noon on Thursday, and I was back home before 7am on Saturday. But those 36 hours were packed. I got to meet new people, see an old friend, and be one of the recipients of Evernote’s incredible hospitality.

Imagination: The Telescope of Consciousness Imagination: The Telescope of Consciousness The role of imagination and why it is underutilized. In a world of utter separation and disillusionment, it can be a very difficult task to imagine how we, the human race, could ever become unified through the expression of love as our primary behavior. DARPA Wearable Tech Suit Could Help Soldiers Run a 4-Minute Mile A quick Google search of “Warrior Web” — a program of the Defense Advanced Research Projects Agency — shows images that appear to be from a science-fiction movie, not a government program. What began nearly three years ago as an effort to create lightweight, exoskeleton suits to help reduce soldier injuries is showing promising results, according to DARPA. The agency says initial prototypes have undergone rigorous evaluation at the Soldier Performance and Equipment Advanced Research Facility at Aberdeen Proving Ground, Md. DARPA teamed with scientists from the Army Research Laboratory Human Research and Engineering Directorate to test nine prototype Warrior Web systems on soldiers during the first phase of the program, according to a May 5 news release. The first phase of testing is focused on technologies that can augment soldiers’ muscle work and increase their capabilities. Here’s a 2013 video of a soldier carrying 61 pounds while walking in a Warrior Web system prototype.

The Standard Memorandum – Word Notebooks Inspired by pocket journals from the early to mid 1900's, The Standard Memorandum is designed to chronicle a year of your life. Word. has teamed up with designer and illustrator, Jon Contino, to create a modern version of this storied notebook. The Standard Memorandum is laid out so you simply jot down a line or two every day for a year and are left with a memento you can save or pass down. The project began after Jon discovered his wife's great-grandfather's pocket journals from the early 1900's that basically recreated what his life was like. Born out of a desire to start doing this himself, Jon partnered with Word. Notebooks to create a journal like the ones he found.

La ciencia del reconocimiento de palabras About fonts > ClearType The Science of Word Recognition or how I learned to stop worrying and love the bouma Kevin LarsonAdvanced Reading Technology, Microsoft CorporationJuly 2004 Just Take a Breath By John Holland You have access to an incredible resource that’s available 24/7, and the best part is, it’s absolutely free! Used to its full potential, it can have a significant and positive affect on your well-being.