Astrology, Soulcraft(TM) & Shamanism as Tools for a Soulful Life 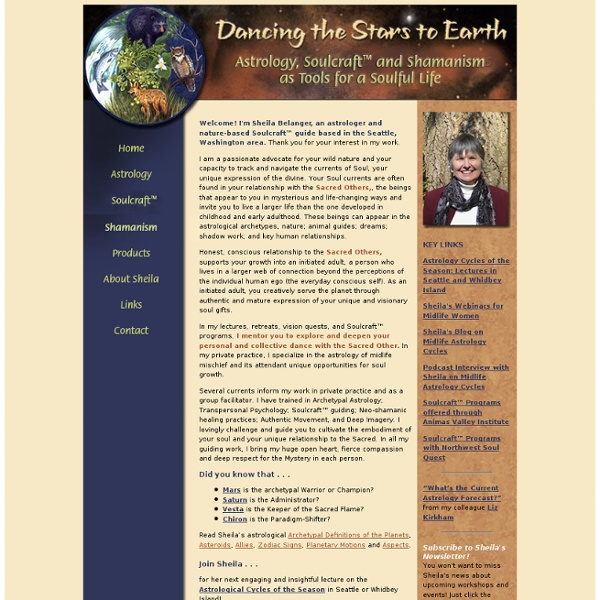 Timemapping Spiritual Transformation: Shamanism and Evolutionary Astrology The Astral Shaman Through my interest and passion for shamanism, the celestial language of astrology visited me, like magi from a distant, exotic desertscape. In 2004, I began an almost obsessive relationship with the Mayan culture, their mysterious 2012 end date, and their sacred 260-day count, called the Tzolkin. Simultaneously, I exposed myself to the world of Amazonian shamanism through Jeremy Nearby's groundbreaking book The Cosmic Serpent, which linked the serpentine visions of shamans and their indigenous cosmologies with the structures of DNA. As the languages of astrology and shamanism penetrated every aspect of my being, I learned that in most cultures, there had never been a separation between shaman and stargazer. As the cultural mythmaker, the shaman would indeed need to maintain communication with the meaning of the cycles of the stars, in addition to his or her transmissions with astral beings and the ancestral realm. Journey into the Past Reach Out and Touch Someone

Blue-eyed Humans Have A Single, Common Ancestor New research shows that people with blue eyes have a single, common ancestor. A team at the University of Copenhagen have tracked down a genetic mutation which took place 6-10,000 years ago and is the cause of the eye colour of all blue-eyed humans alive on the planet today. What is the genetic mutation "Originally, we all had brown eyes," said Professor Hans Eiberg from the Department of Cellular and Molecular Medicine. Limited genetic variation Variation in the colour of the eyes from brown to green can all be explained by the amount of melanin in the iris, but blue-eyed individuals only have a small degree of variation in the amount of melanin in their eyes. Professor Eiberg and his team examined mitochondrial DNA and compared the eye colour of blue-eyed individuals in countries as diverse as Jordan, Denmark and Turkey. Nature shuffles our genes The mutation of brown eyes to blue represents neither a positive nor a negative mutation.

Home of Shamanic Astrology Mystery School Vitamin B-6 Deficiency Sign: No Dream Recall On the way home from preschool the other day, five-year-old Frederick was recounting his dream for the night. As he described the dream, I thought “I must write about this on the site.” What I thought to myself as he told me the story was “Good news. His B-6 status is good.” Your regular doctor will not have this information but pioneer in mental health and food nutrients, Carl Pfieffer, describes in his book Nutrition and Mental Illness that in the presence of a B-6 deficiency you do not recall your dreams at night. 192 How many times have you said, “I don’t have dreams”? You likely do have dreams but you just don’t remember them. I did have a dream last night. Your doctor can test your B-6 level but some will start with a more general plasma homocysteine that is associated with poor folate, B-12, and/or B-6. B-6, by the way, is critical in converting your proteins such as tryptophan into key neurotransmitters such as serotonin. “Children were screaming and laughing. “Were they scared?”

Astrolatry The term astro-theology is used in the context of 18th to 19th century scholarship aiming at the discovery of the original religion, particularly primitive monotheism. Unlike astrolatry, which usually implies polytheism, frowned upon as idolatrous by Christian authors since Eusebius, astrotheology is any "religious system founded upon the observation of the heavens",[1] and in particular, may be monotheistic. Babylonian astronomy from early times associates stars with deities, but the heavens[disambiguation needed] as the residence of an anthropomorphic pantheon, and later of monotheistic God and his retinue of angels, is a later development, gradually replacing the notion of the pantheon residing or convening on the summit of high mountains. Sayce (1913) argues a parallelism of the "stellar theology" of Babylon and Egypt, both countries absorbing popular star-worship into the official pantheon of their respective state religions by identification of gods with stars or planets.[2] 75.

The Effect of Negative Emotions on Our Health | Fractal Enlightenment | हम सब एक है ~ We Are All One “If someone wishes for good health, one must first ask oneself if he is ready to do away with the reasons for his illness. Only then is it possible to help him.” ~ Hippocrates Your mind and body are linked, which can’t be seen, but only felt. Your body reflects your emotional and psychological states. A positive mental attitude and powerful immune system will be the result of a healthy spiritual, physical and emotional state. Think of the time when your heart was racing with anticipation or fright, or that feeling in your stomach – its a result of the thoughts and emotions transferring to the physical body. Your thoughts and feelings are linked to specific parts of the body and different illnesses. I came across this emotional chart which shows the mental thought patterns that form our daily experiences. If you maintain a negative attitude, that invariably attracts negative vibrations and feelings – which disrupts your body’s natural energy flow. Image Source Emotional chart

Cosmic Tree of Life - Oneism - Wayne Herschel - Lost symbol of the Solomon Key parchment In the star photograph animation above, Orion's belt shows the way in alignment to find the place of a special star that many ancient civilisations, especially the Egyptians and the Sumerians worshiped as the place of their great and powerful star visitors. The ancients no doubt insisted that since these 'angelic' beings also had great technology and could do a lot more than just fly... they became their 'gods'. (Hence the listing of the important star here as the star of the 'gods' of ancient civilisations that Wayne covers in his book The Hidden Records). In fact the only real difference between 'them' and 'us' is technology. Two prominent nations still arguing today over different ways - each driven by their collection of records that became two of the most followed religions of this world. What is a holy war some may ask? Union of the two most powerful symbols ... These terrible old ways appear to be secretly working their way back into society again. See www.thehiddenrecords.com