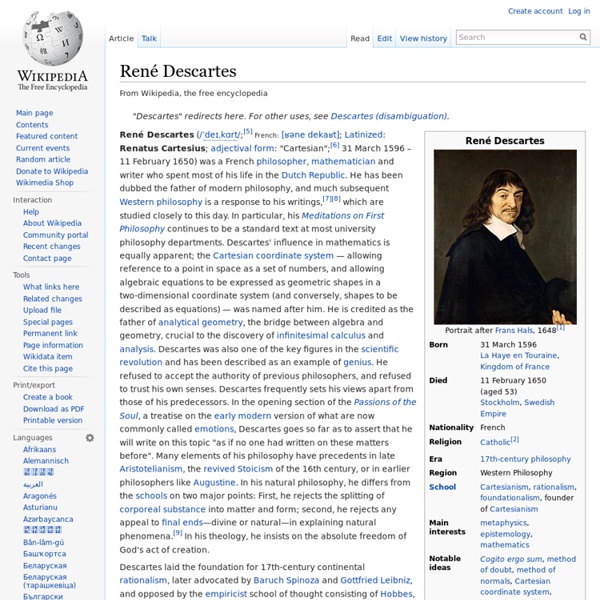 Descartes laid the foundation for 17th-century continental rationalism, later advocated by Baruch Spinoza and Gottfried Leibniz, and opposed by the empiricist school of thought consisting of Hobbes, Locke, Berkeley, and Hume. Leibniz, Spinoza and Descartes were all well versed in mathematics as well as philosophy, and Descartes and Leibniz contributed greatly to science as well. His best known philosophical statement is "Cogito ergo sum" (French: Je pense, donc je suis; I think, therefore I am), found in part IV of Discourse on the Method (1637 – written in French but with inclusion of "Cogito ergo sum") and §7 of part I of Principles of Philosophy (1644 – written in Latin). Early life[edit] Descartes was born in La Haye en Touraine (now Descartes), Indre-et-Loire, France. When he was one year old, his mother Jeanne Brochard died. In his book, Discourse On The Method, he says "I entirely abandoned the study of letters. Visions[edit] Work[edit] Descartes lived on Westermarkt 6 (on the left)

Related:  - • Montainge • The problems with philosophy

Subjectivism Philosophical position according primacy to human mental activity, rather than shared or communal ones Subjectivism is the doctrine that "our own mental activity is the only unquestionable fact of our experience",[1] instead of shared or communal, and that there is no external or objective truth. The success of this position is historically attributed to Descartes and his methodic doubt, although he used it as an epistemological tool to prove the opposite (an objective world of facts independent of one's own knowledge, ergo the "Father of Modern Philosophy" inasmuch as his views underlie a scientific worldview).[1] Subjectivism accords primacy to subjective experience as fundamental of all measure and law.[2] In extreme forms like Solipsism, it may hold that the nature and existence of every object depends solely on someone's subjective awareness of it. [edit] This viewpoint should not be confused with the stance that "all is illusion" or that "there is no such thing as reality."

WHAT DO PHILOSOPHERS BELIEVE? The Visual CV: in a career spanning half a century, Sir Tom Courtenay has gone from a new-wave warrior to a grand old man, via a fool or two (usually called Norman). Irving Wardle picks his best roles on stage and screen From INTELLIGENT LIFE magazine, January/February 2013 1960 The SeagullArriving on the London stage as a RADA graduate from the fish docks of Hull, Tom Courtenay achieved overnight fame as Chekhov’s Konstantin. This was a time when British audiences were used to seeing Konstantin as a lyrically romantic juvenile. What they saw in the 23-year-old Courtenay was a shabby, flat-vowelled malcontent whose filial conflict with Judith Anderson’s queenly Arkadina went beyond the play to dramatise the theatrical war then blazing between the new wave and the old guard.

plato.stanford 1. Intellectual Biography 1.1 Early life and education Descartes was born on 31 March 1596 in his maternal grandmother's house in La Haye, in the Touraine region of France. His father Joachim, a lawyer who lived in Châtellerault (22 kilometers southwest of La Haye, across the Creuse River in the Poitou region), was away at the Parliament of Brittany in Rennes. Spinal cord The spinal cord is a long, thin, tubular structure made up of nervous tissue, that extends from the medulla oblongata in the brainstem to the lumbar region of the vertebral column. It encloses the central canal of the spinal cord that contains cerebrospinal fluid. The brain and spinal cord together make up the central nervous system (CNS).

Fallibilism Broadly speaking, fallibilism (from Medieval Latin: fallibilis, "liable to err") is the philosophical claim that no belief can have justification which guarantees the truth of the belief.[2] However, not all fallibilists believe that fallibilism extends to all domains of knowledge. Usage[edit] The term "fallibilism" is used in a variety of senses in contemporary epistemology. The term was coined in the late nineteenth century by the American philosopher Charles Sanders Peirce. Lesson Plan for Making a Speaker Laboratory ©1995 The Regents of the University of California by Regan Lum Introduction: plato.stanford 1. Early Years Descartes was born in La Haye on March 31, 1596 of Joachim Descartes and Jeanne Brochard. He was one of a number of surviving children (two siblings and two half-siblings).

Dura mater Dura mater, or dura, is a thick membrane made of dense irregular connective tissue that surrounds the brain and spinal cord. It is the outermost of the three layers of membrane called the meninges that protect the central nervous system. The other two meningeal layers are the arachnoid mater and the pia mater. The dura surrounds the brain and the spinal cord and is responsible for keeping in the cerebrospinal fluid. It is derived from neural crest cells.[1] Structure[edit] Infallibility Infallibility is the inability to be wrong. Its importance and meaning is debated in epistemology and major religions. In philosophy[edit] Epistemology, a branch of philosophy, is concerned with the question of what, if anything, humans can know. The answer to the issue of whether or not a human can be infallible depends on the philosophical school.

50 Life Secrets and Tips Memorize something everyday.Not only will this leave your brain sharp and your memory functioning, you will also have a huge library of quotes to bust out at any moment. Poetry, sayings and philosophies are your best options.Constantly try to reduce your attachment to possessions.Those who are heavy-set with material desires will have a lot of trouble when their things are taken away from them or lost. Possessions do end up owning you, not the other way around. iep.utm René Descartes is often credited with being the “Father of Modern Philosophy.” This title is justified due both to his break with the traditional Scholastic-Aristotelian philosophy prevalent at his time and to his development and promotion of the new, mechanistic sciences. His fundamental break with Scholastic philosophy was twofold. First, Descartes thought that the Scholastics’ method was prone to doubt given their reliance on sensation as the source for all knowledge.

Pia mater Pia mater (/ˈpaɪ.ə ˈmeɪtər/ or /ˈpiːə ˈmɑːtər/[1]), often referred to as simply the pia, is the delicate innermost layer of the meninges, the membranes surrounding the brain and spinal cord. Pia mater is medieval Latin meaning "tender mother".[1] The other two meningeal membranes are the dura mater and the arachnoid mater. Both the pia and arachnoid mater are derivatives of the neural crest while the dura is derived from embryonic mesoderm. Pia mater is a thin fibrous tissue that is impermeable to fluid. rus13 THE question as to what we mean by truth and falsehood, which we considered in the preceding chapter, is of much less interest than the question as to how we can know what is true and what is false. This question will occupy us in the present chapter. There can be no doubt that some of our beliefs are erroneous; thus we are led to inquire what certainty we can ever have that such and such a belief is not erroneous. In other words, can we ever know anything at all, or do we merely sometimes by good luck believe what is true? Before we can attack this question, we must, however, first decide what we mean by 'knowing', and this question is not so easy as might be supposed. At first sight we might imagine that knowledge could be defined as 'true belief'.