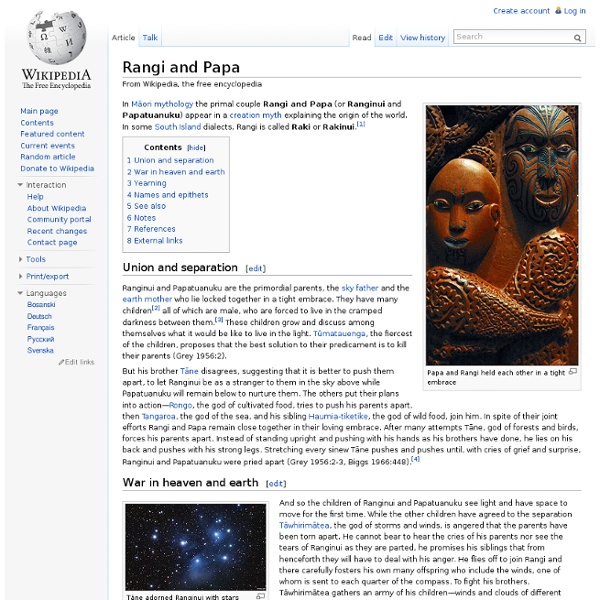 Papa and Rangi held each other in a tight embrace In Māori mythology the primal couple Rangi and Papa (or Ranginui and Papatuanuku) appear in a creation myth explaining the origin of the world. In some South Island dialects, Rangi is called Raki or Rakinui.[1] Union and separation[edit] Ranginui and Papatuanuku are the primordial parents, the sky father and the earth mother who lie locked together in a tight embrace. They have many children[2] all of which are male, who are forced to live in the cramped darkness between them.[3] These children grow and discuss among themselves what it would be like to live in the light. But his brother Tāne disagrees, suggesting that it is better to push them apart, to let Ranginui be as a stranger to them in the sky above while Papatuanuku will remain below to nurture them. War in heaven and earth[edit] Tāne adorned Ranginui with stars And so the children of Ranginui and Papatuanuku see light and have space to move for the first time. Yearning[edit] B.G. Related:  SORT: MISC PEARL: IN PROGRESS

elimination | makeyourownhealth Hello! It’s been a while. It’s springtime now- a time of cleansing, rebirth, and change. I’m feeling positive as my health mission continues. The two week colon cleanse seemed to have been a moderate success; I think I expelled some stored toxins, but my digestive issues are by no means cured. That said, I didn’t expect to reverse in two weeks the problems which have developed over 34 years. I recently read The Body Ecology Diet by Donna Gates, which is a program designed to bring unhealthy bacteria overgrowth under control and repopulate the good guys. What I like about the book is the idea of not only starving the yeast, which I’ve been trying to do by avoiding sugar, refined carbs, and alcohol, but sending in some troops of good bacteria to fight them. Also on the advice of The Body Ecology Diet and my tummy, I have been incorporating some very simple vegetable soups into my diet. One more thing I am working on adding to my diet every day is sea vegetables.

Kumulipo In ancient Hawaiian mythology, the Kumulipo is a chant in the Hawaiian language telling a creation story.[1] It also includes a genealogy of the members of Hawaiian royalty. Creation chant[edit] Many cultures have their own beliefs on how the earth came to be created. He Kumulipo means "A source of darkness or origin".[1] In some cultures, children are brought up thinking that the dark is a bad place, one to avoid. Ancient Hawaiians thought of it as a place of creation. In the Kumulipo the world was created over a cosmic night. Years later Queen Liliʻuokalani described the chant as a prayer of the development of the universe and the ancestry of the Hawaiians.[4] Liliʻuokalani translated the chant under house arrest in Iolani Palace. The Kumulipo is a total of 2102 lines long, in honor of Lonoikamakahiki, who created peace for all when he was born. Divisions[edit] The Kumulipo is divided into sixteen wā, sections. These are the first four lines of the Kumulipo: Births in each wā[edit]

Astrology, Soulcraft(TM) & Shamanism as Tools for a Soulful Life Hiranyagarbha Click an area to go there. This is one of many material universes, Brahmāṇḍa, which expand from Mahā Viṣṇu when He breathes. Hiraṇyagarbha (Devanagari: हिरण्यगर्भः ; literally the 'golden womb' or 'golden egg', poetically rendered 'universal germ') is the source of the creation of the Universe or the manifested cosmos in Indian philosophy,[1] it finds mention in one hymn of the Ṛigveda (RV 10.121), known as the 'Hiraṇyagarbha Sūkta', suggesting a single creator deity(verse 8: yo deveṣv ādhi devā eka āsīt, Griffith:"He is the God of gods, and none beside him."), in the hymn identified as Prajāpati The concept golden womb is again mentioned in Viswakarma suktha Rg 10-82. The Upaṇiṣad calls it the Soul of the Universe or Brahman,[2] and elaborates that Hiraṇyagarbha floated around in emptiness and the darkness of the non-existence for about a year, and then broke into two halves which formed the Svarga and the Pṛthvi. Creation[edit] Hiraṇyagarbha Shaligram Shila For Altar[edit] ॐ ! 1. 2. 3.

Ancient Egyptian creation myths The sun rises over the circular mound of creation as goddesses pour out the primeval waters around it Ancient Egyptian creation myths are the ancient Egyptian accounts of the creation of the world. The Pyramid Texts, tomb wall decorations and writings, dating back to the Old Kingdom (2780 – 2250 B.C.E) have given us most of our information regarding early Egyptian creation myths.[1] These myths also form the earliest religious compilations in the world.[2] The ancient Egyptians had many creator gods and associated legends. Common elements[edit] The sun was also closely associated with creation, and it was said to have first risen from the mound, as the general sun-god Ra or as the god Khepri, who represented the newly-risen sun.[6] There were many versions of the sun's emergence, and it was said to have emerged directly from the mound or from a lotus flower that grew from the mound, in the form of a heron, falcon, scarab beetle, or human child[6][7] Cosmogonies[edit] Hermopolis[edit]

Blue-eyed Humans Have A Single, Common Ancestor New research shows that people with blue eyes have a single, common ancestor. A team at the University of Copenhagen have tracked down a genetic mutation which took place 6-10,000 years ago and is the cause of the eye colour of all blue-eyed humans alive on the planet today. What is the genetic mutation "Originally, we all had brown eyes," said Professor Hans Eiberg from the Department of Cellular and Molecular Medicine. Limited genetic variation Variation in the colour of the eyes from brown to green can all be explained by the amount of melanin in the iris, but blue-eyed individuals only have a small degree of variation in the amount of melanin in their eyes. Professor Eiberg and his team examined mitochondrial DNA and compared the eye colour of blue-eyed individuals in countries as diverse as Jordan, Denmark and Turkey. Nature shuffles our genes The mutation of brown eyes to blue represents neither a positive nor a negative mutation.

Völuspá Völuspá (Old Norse Vǫluspá, Prophecy of the Völva (Seeress); Modern Icelandic [ˈvœːlʏˌspauː], reconstructed Old Norse [ˈwɔluˌspɑː]) is the first and best known poem of the Poetic Edda. It tells the story of the creation of the world and its coming end related by a völva addressing Odin. It is one of the most important primary sources for the study of Norse mythology. The poem is preserved whole in the Codex Regius and Hauksbók manuscripts while parts of it are quoted in the Prose Edda. It consists of approximately 60 fornyrðislag stanzas. Preservation[edit] Völuspá is found in the Codex Regius manuscript (ca. 1270) and in Haukr Erlendsson's Hauksbók Codex (ca. 1334), and many of its stanzas are quoted or paraphrased in Snorri Sturluson's Prose Edda (composed ca. 1220, oldest extant manuscript dates from ca. 1300). Structure[edit] The poem consists of some 60 fornyrðislag stanzas. Synopsis[edit] The new world that rises after Ragnarök (depiction by Emil Doepler) In popular culture[edit] J.

Vitamin B-6 Deficiency Sign: No Dream Recall On the way home from preschool the other day, five-year-old Frederick was recounting his dream for the night. As he described the dream, I thought “I must write about this on the site.” What I thought to myself as he told me the story was “Good news. Your regular doctor will not have this information but pioneer in mental health and food nutrients, Carl Pfieffer, describes in his book Nutrition and Mental Illness that in the presence of a B-6 deficiency you do not recall your dreams at night. 192 How many times have you said, “I don’t have dreams”? You likely do have dreams but you just don’t remember them. I did have a dream last night. Your doctor can test your B-6 level but some will start with a more general plasma homocysteine that is associated with poor folate, B-12, and/or B-6. B-6, by the way, is critical in converting your proteins such as tryptophan into key neurotransmitters such as serotonin. For those who wonder what five-year-old boys dream about, here you go:

Greek mythology Greek mythology is explicitly embodied in a large collection of narratives, and implicitly in Greek representational arts, such as vase-paintings and votive gifts. Greek myth attempts to explain the origins of the world, and details the lives and adventures of a wide variety of gods, goddesses, heroes, heroines and mythological creatures. These accounts initially were disseminated in an oral-poetic tradition; today the Greek myths are known primarily from Greek literature. Archaeological findings provide a principal source of detail about Greek mythology, with gods and heroes featured prominently in the decoration of many artifacts. Geometric designs on pottery of the eighth century BC depict scenes from the Trojan cycle as well as the adventures of Heracles. Sources Literary sources The poetry of the Hellenistic and Roman ages was primarily composed as a literary rather than cultic exercise. Archaeological sources Survey of mythic history Origins of the world and the gods