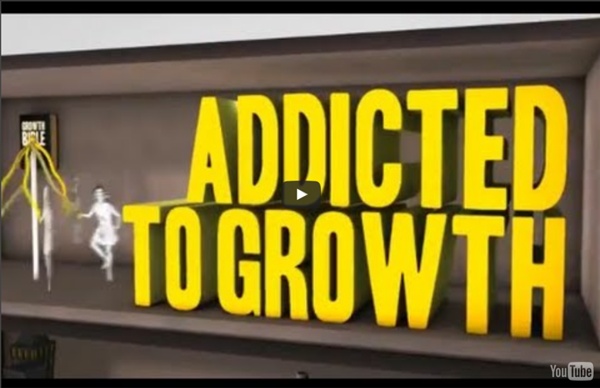 Related:  The Myth of Infinite Growth

Recovered Sustainable Means Bunkty to Me 1977 views this month; 1977 overall What? Don’t know what bunkty means? Now you know how I feel about the word “sustainable.” My paper towels separate into smaller segments than they once did. It’s sustainable! I think most would agree that the rapid depletion we currently witness in natural resources and services, climate stability, water availability, soil quality, and fisheries—to name a few—suggests that we do not live sustainably at present. Sustainability, in Numbers I have made the case in the past that growth—either in physical measures like population, energy use, etc., or in economic terms—cannot continue indefinitely in our finite world. If we think about the fact that growth must one day end, we realize that an ultimate steady state would tend to reduce income inequalities. Our dream is that the poor of the world can improve their standard of living toward first-world norms. You may object that Americans don’t eat five times more food than the average Earthling today.

Exponential Economist Meets Finite Physicist [slimstat f='count' w='ip' lf='resource contains economist'] views this month; [slimstat f='count' w='ip' lf='strtotime equals 2011-07-01|interval equals -1'] overall Some while back, I found myself sitting next to an accomplished economics professor at a dinner event. Shortly after pleasantries, I said to him, “economic growth cannot continue indefinitely,” just to see where things would go. It was a lively and informative conversation. I was somewhat alarmed by the disconnect between economic theory and physical constraints—not for the first time, but here it was up-close and personal. Cast of characters: Physicist, played by me; Economist, played by an established economics professor from a prestigious institution. Note: because I have a better retention of my own thoughts than those of my conversational companion, this recreation is lopsided to represent my own points/words. Act One: Bread and Butter Physicist: Hi, I’m Tom. Economist: Hi Tom, I’m [ahem..cough]. Total U.S.

Galactic-Scale Energy Since the beginning of the Industrial Revolution, we have seen an impressive and sustained growth in the scale of energy consumption by human civilization. Plotting data from the Energy Information Agency on U.S. energy use since 1650 ( 1635-1945 , 1949-2009 , including wood, biomass, fossil fuels, hydro, nuclear, etc.) shows a remarkably steady growth trajectory, characterized by an annual growth rate of 2.9% (see figure). It is important to understand the future trajectory of energy growth because governments and organizations everywhere make assumptions based on the expectation that the growth trend will continue as it has for centuries—and a look at the figure suggests that this is a perfectly reasonable assumption. (See this update for nuances.) Total U.S. Growth has become such a mainstay of our existence that we take its continuation as a given. This post provides a striking example of the impossibility of continued growth at current rates—even within familiar timescales.

Growth thumbnail from NYT As a rejoinder to my piece a couple weeks ago (not really), the New York Times published an article on population growth, and why we need not worry. The problem—and solution—is all in our head. The bottom line was that we have always transformed our ecosystem to provide what we need, and in so doing have pushed the carrying capacity along with our growing population. Clearly there is a misunderstanding, but I’ll side with the natural scientists, naturally. Continue reading Sometimes considered a taboo subject, the issue of population runs as an undercurrent in virtually all discussions of modern challenges. The subject is taboo for a few reasons. Recently, participating in a panel discussion in front of a room full of physics educators, I made the simple statement that “surplus energy grows babies.” So in the spirit of looking at the numbers, let’s explore in particular various connections between population and energy. Continue reading Continue reading Continue reading

Can Economic Growth Last? [slimstat f='count' w='ip' lf='resource contains can-economic'] views this month; [slimstat f='count' w='ip' lf='strtotime equals 2011-07-01 | interval equals -1'] overall As we saw in the previous post, the U.S. has expanded its use of energy at a typical rate of 2.9% per year since 1650. We learned that continuation of this energy growth rate in any form of technology leads to a thermal reckoning in just a few hundred years (not the tepid global warming, but boiling skin!). What does this say about the long-term prospects for economic growth, if anything? World economic growth for the previous century, expressed in constant 1990 dollars. The figure at left shows the rate of global economic growth over the last century, as reconstructed by J. The difference between economic and energy growth can be split into efficiency gains—we extract more activity per unit of energy—and “everything else.” Exponential vs. First, let’s address what I mean when I say growth. Potential Gains and Limits

Arithmetic, Population and Energy - 1 - a talk by Al Bartlett Understanding Exponential Growth Tutorial and Exercise - World Population Balance When most people talk about "growth" in our country, they consider it a completely positive and necessary thing, essential for maintaining the vitality and health of our economy and society. Our society's most revered economic indicators are all based on this fundamental idea: that continuing growth is vital for the health and preservation of our economy and country. In fact, growth is pretty much the only thing they measure! However, natural scientists (such as biologists, chemists, and physicists) know that this assumption must be false. So what happens to steady growth in a limited space? Let's say that these bacteria have all the food they need.

Clean energy won’t save us – only a new economic system can | Global Development Professionals Network Earlier this year media outlets around the world announced that February had broken global temperature records by a shocking amount. March broke all the records too. In June, our screens were covered with surreal images of flooding in Paris, the Seine bursting its banks and flowing into the streets. With such extreme events becoming more commonplace, few deny climate change any longer. This growing awareness about the dangers of fossil fuels represents a crucial shift in our consciousness. Let’s imagine, just for argument’s sake, that we are able to get off fossil fuels and switch to 100% clean energy. Why? When it comes to climate change, the problem is not just the type of energy we are using, it’s what we’re doing with it. Think of it this way. The climate movement made an enormous mistake. The root problem is the fact that our economic system demands ever-increasing levels of extraction, production and consumption.

Finally, a breakthrough alternative to growth economics – the doughnut | George Monbiot | Opinion So what are we going to do about it? This is the only question worth asking. But the answers appear elusive. Faced with a multifaceted crisis – the capture of governments by billionaires and their lobbyists, extreme inequality, the rise of demagogues, above all the collapse of the living world – those to whom we look for leadership appear stunned, voiceless, clueless. Even if they had the courage to act, they have no idea what to do. The most they tend to offer is more economic growth: the fairy dust supposed to make all the bad stuff disappear. You can see the effects in a leaked memo from the UK’s Foreign Office: “Trade and growth are now priorities for all posts … work like climate change and illegal wildlife trade will be scaled down.” We cannot hope to address our predicament without a new worldview. Raworth points out that economics in the 20th century “lost the desire to articulate its goals”. The central image in mainstream economics is the circular flow diagram.