What Does Kevin Bacon Have to Do with Global Financial Stability? Could Kevin Bacon have saved us from the 2008 financial crisis? 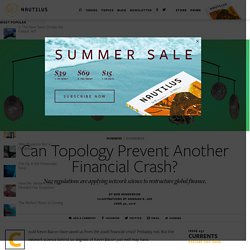 Elizabeth Warren Champions Bill to Restore Glass-Steagall Act and Rein in Wall Street. (Photo: mdfriendofHillary) This BuzzFlash commentary could not have been published without readers like you. 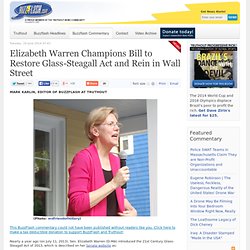 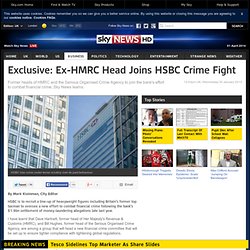 I have learnt that Dave Hartnett, former head of Her Majesty's Revenue & Customs (HMRC), and Bill Hughes, former head of the Serious Organised Crime Agency, are among a group that will head a new financial crime committee that will be set up to ensure tighter compliance with tightening global regulations. Could Reverse PIN Save Lives at ATM? May 21, 2012 by Julie Montanaro Type the words ATM and murder into Google News. 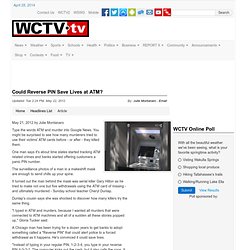 You might be surprised to see how many murderers tried to use their victims' ATM cards before - or after - they killed them. One man says it's about time states started tracking ATM related crimes and banks started offering customers a panic PIN number. 070110_Dodd_Frank_Wall_Street_Reform_comprehensive_summary_Final.pdf (application/pdf Object) Volcker Rule. The proposals are named after their creator, former Federal Reserve Chairman Paul Volcker. 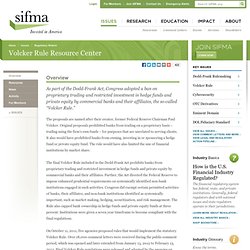 Original proposals prohibited banks from trading on a proprietary basis – trading using the firm’s own funds – for purposes that are unrelated to serving clients. It also would have prohibited banks from owning, investing in or sponsoring a hedge fund or private equity fund. The rule would have also limited the size of financial institutions by market share. The final Volcker Rule included in the Dodd-Frank Act prohibits banks from proprietary trading and restricted investment in hedge funds and private equity by commercial banks and their affiliates. Further, the Act directed the Federal Reserve to impose enhanced prudential requirements on systemically identified non-bank institutions engaged in such activities.

On October 11, 2011, five agencies proposed rules that would implement the statutory Volcker Rule. The Financial Crisis and the Path of Reform: Three Years Later - Up Front Blog. The financial crisis devastated the U.S. economy in the fall of 2008 and plunged us into a recession that shuttered American businesses, led to widespread job losses, and wiped out home values and household savings. 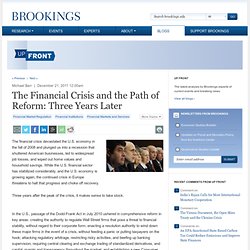 While the U.S. financial sector has stabilized considerably, and the U.S. economy is growing again, the continued crisis in Europe threatens to halt that progress and choke off recovery. Three years after the peak of the crisis, it makes sense to take stock. On the global level, the international community has put forward strict new rules on capital, so that there are bigger buffers in the system in the event of failures. Capital and the risk of assets will be measured in a more conservative way, and capital levels will go up significantly. Systemically important firms will hold even higher levels of capital.

Despite progress thus far, financial reform and the financial system face key threats. Second, money market funds were a core source of systemic risk in the crisis. Bungled Bank Bailout Leaves Behind Righteous Anger. In the year since I stepped down as the special inspector general of the Troubled Asset Relief Program, the sadly predictable consequences of the government’s disparate treatment of Wall Street and Main Street have only become worse. As the banks amass size and power, Main Street continues to get pummeled. Part of the current economic malaise can be traced directly to Treasury’s betrayal of its promise to use TARP to “preserve homeownership.” The Home Affordable Modification Program has brought little meaningful improvement, with fewer than 800,000 ongoing permanent modifications as of March 31, 2012, a number that is growing at the glacial pace of just 12,000 per month.

Released Payments Treasury couldn’t even keep this modest commitment. Treasury Hits Back at Critics of Dodd-Frank Rules - US Business News. A recent report from the Davis-Polk law firm showed regulators have missed the deadline on 78 percent of the 400 rules and regulations required under Dodd-Frank, including 12 percent, or 25 rules, where the deadline has been missed but the rules have not even been proposed. 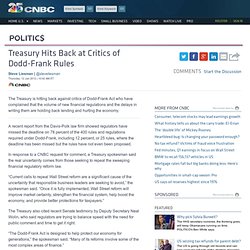 Dodd-Frank is More Right than Wrong. The excerpt below is from a U.S. 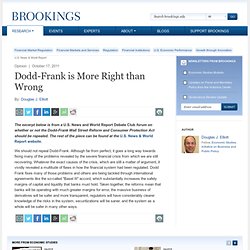 News and World Report Debate Club forum on whether or not the Dodd-Frank Wall Street Reform and Consumer Protection Act should be repealed. How Wall Street Killed Financial Reform. A Debate Goes Behind Closed Doors. In the long war over Wall Street regulation, a little-noticed clash erupted this week over a plan to rein in risky trading overseas. 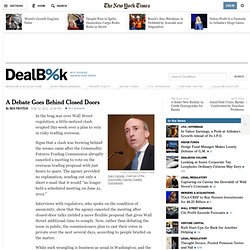 Signs that a clash was brewing behind the scenes came after the Commodity Futures Trading Commission abruptly canceled a meeting to vote on the overseas trading proposal with just hours to spare. The agency provided no explanation, sending out only a short e-mail that it would “no longer hold a scheduled meeting on June 21, 2012.” Interviews with regulators, who spoke on the condition of anonymity, show that the agency canceled the meeting after closed-door talks yielded a more flexible proposal that gives Wall Street additional time to comply. Now, rather than debating the issue in public, the commissioners plan to cast their votes in private over the next several days, according to people briefed on the matter. 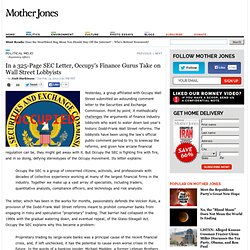 Is This the End of Wall Street As They Knew It? On Wall Street, bonus season is a sacred ritual. The Simplicity Solution. Will the law prevent another bank bailout if we have a repeat of September 2008? Weill Calls for Splitting Up Big Banks. Don’t Break Up the Big Banks. Remember That $83 Billion Bank Subsidy? We Weren't Kidding. Our calculation, in a Feb. 21 editorial, showing that the top 10 U.S. banks receive a taxpayer subsidy worth $83 billion a year has generated some, um, discussion.