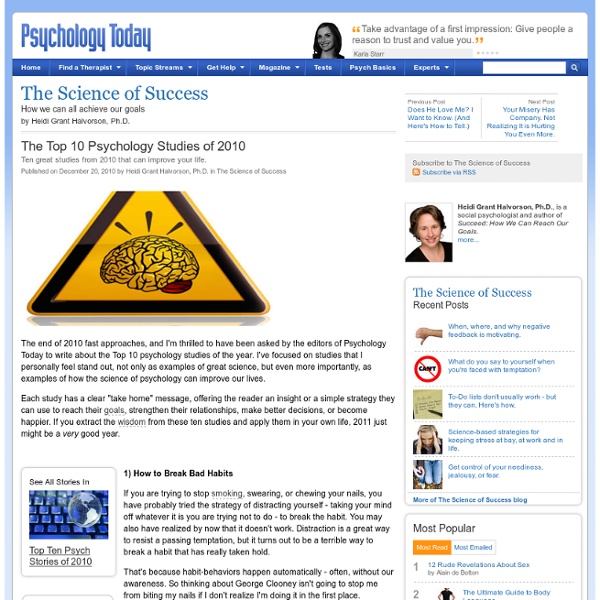 The end of 2010 fast approaches, and I'm thrilled to have been asked by the editors of Psychology Today to write about the Top 10 psychology studies of the year. I've focused on studies that I personally feel stand out, not only as examples of great science, but even more importantly, as examples of how the science of psychology can improve our lives. Each study has a clear "take home" message, offering the reader an insight or a simple strategy they can use to reach their goals , strengthen their relationships, make better decisions, or become happier. If you extract the wisdom from these ten studies and apply them in your own life, 2011 just might be a very good year. 1) How to Break Bad Habits If you are trying to stop smoking , swearing, or chewing your nails, you have probably tried the strategy of distracting yourself - taking your mind off whatever it is you are trying not to do - to break the habit. J. 2) How to Make Everything Seem Easier J. 3) How To Manage Your Time Better M. J.

8 Important Reasons To Let Go Of People Who No Longer Play An Important Part In Your Life There comes a point in every person's life when he or she parts ways with someone: ex, friend and anyone in between. Upon first meeting this person, there's a sweet beginning, but once you come to really know each other and grow comfortable, you suddenly realize that the relationship no longer brings any particular value to your life and is perhaps, even detrimental. Sometimes, we hold on to people purely based on how long we have known them. Time can tie people together, but if you feel as though there's nothing substantial keeping you connected, time is not a strong enough reason to hold on to something that's simply no longer worth holding onto. We grow complacent with people once we're comfortable with them.

Communications and Personality Type – Judging & Perceiving « The PEOPLE Process The fourth behavior dimension?how we take Action?Judging or Perceiving is vital to understand about one another because it is related to how we like to organize our world. Judging types prefer to decide and Perceiving types prefer to explore options. 23 Psychological Life Hacks to get an Advantage Have you always wondered about the subtle things you can do to totally improve the outcome of a situation? It is something that I have constantly been thinking about. After spending some time searching up on the subject I came across some incredible bits of advice from a reddit discussion. From this, I’ve pulled out and organized users’ top advice on how to improve your outcomes.

How to Stop Worrying Undoing the Worrying Habit Once acquired, the habit of worrying seems hard to stop. We're raised to worry and aren't considered "grown up" until we perfect the art. Teenagers are told: "you'd better start worrying about your future". If your worries aren't at least as frequent as your bowel movements, you're seen as irresponsible, childish, aimless. Generic Love Some years ago I was having dinner with my girlfriend, Liz; among other items on my plate was a heaping mound of mashed potatoes. When Liz noticed I had finished eating all of my potatoes, she instantly ladled another scoop onto my plate, without asking. She had done this before, and I felt I needed to say something:

10 Painfully Obvious Truths Everyone Forgets Too Soon Reading Time: 6 minutes You know how you can hear something a hundred times in a hundred different ways before it finally gets through to you? The ten truths listed below fall firmly into that category – life lessons that many of us likely learned years ago, and have been reminded of ever since, but for whatever reason, haven’t fully grasped. Perception Since the rise of experimental psychology in the 19th Century, psychology's understanding of perception has progressed by combining a variety of techniques.[3] Psychophysics quantitatively describes the relationships between the physical qualities of the sensory input and perception.[5] Sensory neuroscience studies the brain mechanisms underlying perception. Perceptual systems can also be studied computationally, in terms of the information they process. Perceptual issues in philosophy include the extent to which sensory qualities such as sound, smell or color exist in objective reality rather than in the mind of the perceiver.[3] The perceptual systems of the brain enable individuals to see the world around them as stable, even though the sensory information is typically incomplete and rapidly varying. Human and animal brains are structured in a modular way, with different areas processing different kinds of sensory information. Process and terminology[edit]

Reevaluate Your Life In 10 Minutes I’m 24, which means that most of my friends are asking themselves some version of — What’s next? For me, journalism was out. That career dream died the day I actually imagined myself holed up in a news room, busting out click bait. I thought about advertising, PR, doing biz-dev for a web video outfit that did story-based branding (would you like another buzzword with that?), even joining a tech startup. I went to a lot of exploratory meetings that ended disastrously.

10 Simple Postures That Boost Performance Psychological research suggests simple actions can project power, persuade others, increase empathy, boost cognitive performance and more… We tend to think of body language as something that expresses our internal states to the outside world. But it also works the other way around: the position of our body also influences our mind. As the following psychological research shows, how we move can drive both thoughts and feelings and this can boost performance.

Cool, this is a really good resource by cschulze Dec 13