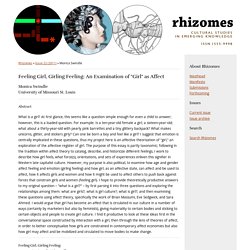 Louis Abstract What is a girl? At first glance, this seems like a question simple enough for even a child to answer; however, this is a loaded question. To the Teenage Girls at the Swimming Pool - Christine Organ. Don’t worry; this isn’t going to be one of those letters. 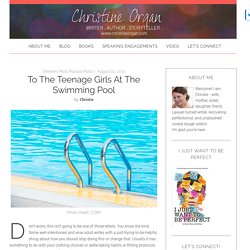 You know the kind. Some well-intentioned and wise adult writes with a just-trying-to-be-helpful shrug about how you should stop doing this or change that. Usually it has something to do with your clothing choices or selfie-taking habits or flirting protocols. Teen Sex is Safer than You Think. Over the past several months, I have found myself increasingly depressed and enraged by what seems to be endless stories about sexual and physical violence directed toward girls. 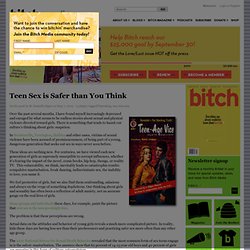 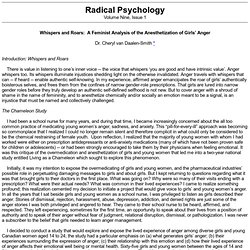 Cheryl van Daalen-Smith * Introduction: Whispers and Roars There is value in listening to one’s inner voice -- the voice that whispers ‘you are good and have intrinsic value’. The Chameleon Study. Feminist chatter. Women's Studies Association New Zealand. Sexualization of childoohood is children’s rights issue of our time. I'm Only Friends with Boys. “I just don’t get along with girls. 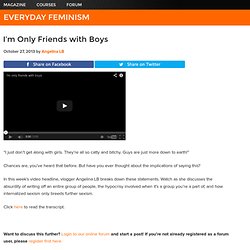 They’re all so catty and bitchy. Guys are just more down to earth!” Chances are, you’ve heard that before. Girls, Girlhood and Feminism. Last night I was lucky enough to be asked by the YWCA of Canberra to speak at a film screening of the documentary I am a girl. 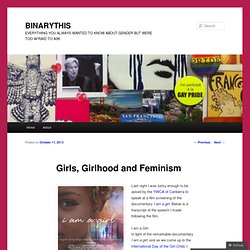 Below is a transcript of the speech I made following the film. I am a GirlIn light of the remarkable documentary I am a girl, and as we come up to the International Day of the Girl Child, I thought today it might be interesting to look at some of the ways in which the concept of the girl has been considered in an academic context, and how we might see this film as doing work in contributing to this conversation. Berghahn Journals Instant Identity: Adolescent Girls and the World of Instant Messa... Berghahn Journals Negotiating, Constructing and Reconstructing Girlhoods. Berghahn Journals Sex Talk Online: <i>Sexual Self-Construction in Adolescent Intern... Author: Szucs, Eszter Source: Girlhood Studies, Volume 6, Number 1, Summer 2013 , pp. 117-134(18) Buy & download fulltext article: Abstract: The teen-targeted website gURL. com is committed to providing educational information about sexuality and sexual health to young girls. 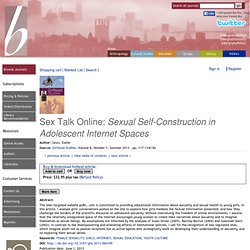 In this article, I analyze girls' conversations posted on the site to explore how girls mediate the factual information presented, and how they challenge the borders of the scientific discourse on adolescent sexuality. The requested document is freely available to subscribers. Sign in below if you have already registered for online access Register for online access if you are a personal subscriber to Berghahn Journals and want to set up online access Visit IngentaConnect to activate access to an institutional subscription Find out how to subscribe Sign in. 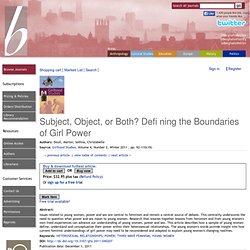 Berghahn Journals Texts about Girls, for Girls and by Girls. Berghahn Journals Negotiating, Constructing and Reconstructing Girlhoods. The Myth of Shared Girlhood. The below first-hand accounts of sexual victimization of young girls are taken from a sample of 200 submissions to the Everyday Sexism Project from a roughly 10 hour period on June 17th & 18th this year. 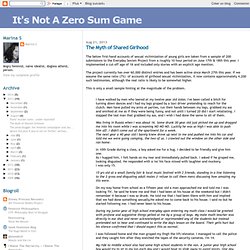 I implemented a cut-off age of 16 and included only stories with an explicit age mention. The project currently has over 60,000 distinct entries and has been active since March 27th this year. If we assume the same ratio (7%) of accounts of girlhood sexual victimization, it now contains approximately 4,200 such testimonies, although the real ratio is likely to be somewhat higher. This is only a small sample hinting at the magnitude of the problem. I have walked by men who leered at my twelve year old sister, I've been called a bitch for turning down dances and I had my legs groped by a taxi driver pretending to reach for the clutch. Was living in Russia when I was about 16. In 10th Grade during a class, a boy asked me for a hug. I was 14 years old and in school. 13. Rania Matar Photography - A Girl and her Room. Teenage-feminist.blogspot.ca/2011/06/what-does-being-girl-mean-to-you.html. Girl Culture (NSFW) Karl B. alerted us to the photography of Lauren Greenfield. 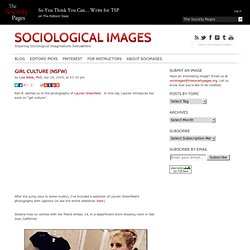 In this clip, Lauren introduces her work on “girl culture”: After the jump (due to some nudity), I’ve included a selection of Lauren Greenfield’s photographs with captions (or see the entire slideshow here). Sheena tries on clothes with her friend Amber, 14, in a department store dressing room in San Jose, California: A dancer hides her tampon backstage at Little Darlings in Las Vegas, Nevada:

Sugar, spice and stronger stuff. Saturday Vids: Empowered Girls. Pop-Culture | Posted by Jessie W on 08/20/2011 Most of my friends know me as the “YouTube Aficionado” because I’m obsessed with funny YouTube videos. I’ve noticed that there has been a recent wave of videos of empowered little girls. The way I look at it, there are two possible conclusions for this increase. Either this young group of girls are avoiding the negative impacts of the media and are already standing up for what they believe in, or (the more likely option) they just haven’t witnessed enough of it yet.

Either way, I think we could all benefit by getting in touch with our inner empowered little girl. Girl Power: All Dolled Up. Project Girl Power. UPDATE 2013: Project Girl Performance Collective is now Girl Be Heard. Double Rainbow: Asperger's and Girls Part 2: "Boys, fashion, shopping, movies, and music"

Girls’ Media: What are your essential texts?  At the school where I teach, the students don’t have finals. Instead, at the end of each semester, they embark upon two massive, two-week projects of their own devising. For example, I’m sponsoring individual project weeks on Cult Film and classic feminist texts.