Philippines’ Duterte calls Obama ‘son of a whore’ Philippine President Rodrigo Duterte called Barack Obama a “son of a whore” on Monday as he vowed not to be lectured by the US leader on human rights when they meet in Laos. 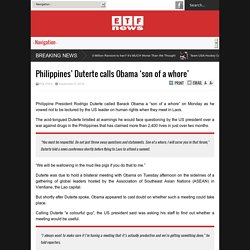 The acid-tongued Duterte bristled at warnings he would face questioning by the US president over a war against drugs in the Philippines that has claimed more than 2,400 lives in just over two months. “You must be respectful. Do not just throw away questions and statements. Girl Goes To Sleepover, But It Quickly Becomes 'Every Parent's Worst Nightmare!' UK girls becoming more unhappy - study. Girls in Britain are becoming more miserable, suggests the Children's Society's annual report. 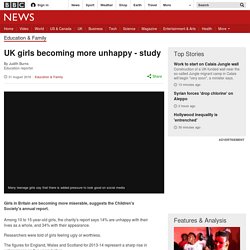 Among 10 to 15-year-old girls, the charity's report says 14% are unhappy with their lives as a whole, and 34% with their appearance. Researchers were told of girls feeling ugly or worthless. The figures for England, Wales and Scotland for 2013-14 represent a sharp rise in unhappiness on five years before. By contrast the study found that boys' sense of happiness remained stable. Appearance worries The charity's annual Good Childhood Report, now in its 11th year, draws its findings on teenagers' happiness from the Understanding Society Survey which gathers data on 40,000 households across the UK.

How do you help girls feel happier? Children's Society and University of York researchers examined responses on the wellbeing of 10 to 15-year-olds. They found that between 2009-10 and 2013-14 on average 11% of both boys and girls said they were unhappy. Under pressure: Teens speak out Image copyright Thinkstock. Kenny Leigh Says He Only Represents Men Because It's the Right Thing to Do. Wednesday, July 27, 2016 at 9:50 a.m. 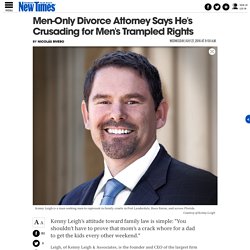 Kenny Leigh’s attitude toward family law is simple: “You shouldn’t have to prove that mom’s a crack whore for a dad to get the kids every other weekend.” Leigh, of Kenny Leigh & Associates, is the founder and CEO of the largest firm of for-men-only family lawyers in Florida, with offices in Boca Raton and Fort Lauderdale. You may have seen his billboards advertising MenOnlyFamilyLawOnly.com popping up around the state recently. As he sees it, he’s out to fight for men’s rights as they navigate divorce, child custody, and alimony disputes. “Family law is basically the one area on the planet where being a man puts you behind,” Leigh said. To be clear, the laws themselves are perfectly equal. MEGIKARI. LOL: Feminist Organizes 'No Bra Day' to Teach Men 'Not to Sexualize Women's Bodies'

So, she decided to organize No Bra Day at Helena: A day where perky high school girls would walk the halls and go to classes bra-less in protest. That'll show 'em! Talk about a dagger to the heart of the patriarchy; I don’t know how male privilege will ever rebound from the onslaught of bra-less girls. “It was about gender equality and teaching people not to sexualize women’s bodies,” she told The Guardian, explaining her motives for organizing the protest event. Of course, by gender “equality," Juvik means sameness. 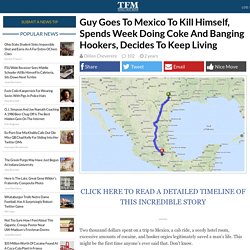 This might be the first time anyone’s ever said that. Don’t know. Amidst a battle of debilitating depression, he traveled to Mexico to purchase “chemicals” to humanely end his life. The aptly-named Reddit user, plzsendhalp, shares his story involving ripping lines of coke off hookers’ tits, battling whiskey/coke dick with Viagra, multiple threesomes, and of course his will to finally live. From reddit: I was a 'dinner whore': Confessions of a fashionista who cruised Craigslist and OKCupid for dates just so she could get free meals. 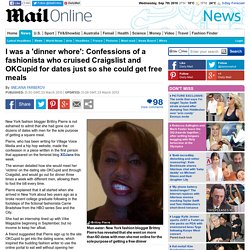 Pierre, who has been writing for Village Voice Media and a hip hop website, made the confession in a piece written in the first person that appeared on the feminist blog XOJane this week. The woman detailed how she would meet her 'victims' on the dating site OKCupid and through Craigslist, and would go out for dinner three times a week with different men, allowing them to foot the bill every time. She had an internship lined up with Vibe Magazine beginning in September, but no income to keep her afloat. At times, the free meals came at a steep price.

Hospitalized ... Will Undergo Surgery. 5 Reasons Why Girls With Tattoos And Piercings Are Broken. I Love Tattoos - Timeline.