Audiogram. Audiogram An audiogram is a graph that shows the audible threshold for standardized frequencies as measured by an audiometer. 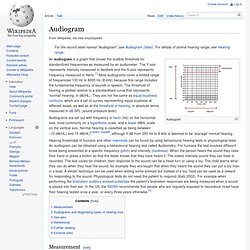 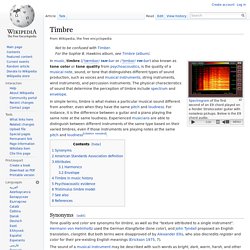 Spectrogram of the first second of an E9 chord played on a Fender Stratocaster guitar with noiseless pickups. Below is the E9 chord audio: Synonyms[edit] Tone quality and color are synonyms for timbre, as well as the "texture attributed to a single instrument". Hermann von Helmholtz used the German Klangfarbe (tone color), and John Tyndall proposed an English translation, clangtint. The sound of a musical instrument may be described with such words as bright, dark, warm, harsh, and other terms. Unison. Interval of the unison [edit] Two pitches that are the same or two that move as one.[2] play unison on C, piano and guitar ; or of the same type: play unison on C, two pianos . 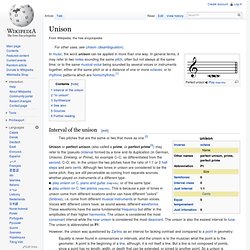 This is because a pair of tones in unison come from different locations and/or can have different "colors" (timbres), i.e. come from different musical instruments or human voices. Perfect fourth. Just intonation. Syntonic temperament. Alternatively put, the syntonic temperament: generates all non-octave intervals from a stack of tempered perfect fifths; andtempers the syntonic comma to unison. 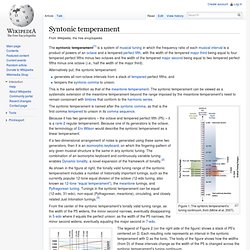 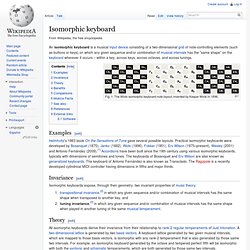 Microtonal music. Composer Charles Ives chose the chord above as a good candidate for a "fundamental" chord in the quarter tone scale, akin not to the tonic but to the major chord of traditional tonality. 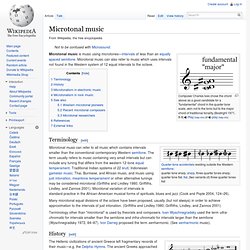 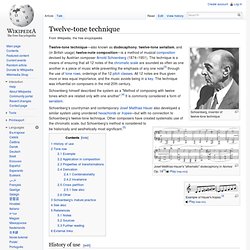 Chromatic scale. Chromatic scale drawn as a circle: each note is equidistant from its neighbors, separated by a semitone of the same size. 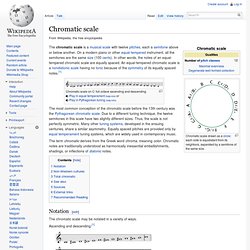 The most common conception of the chromatic scale before the 13th century was the Pythagorean chromatic scale. Due to a different tuning technique, the twelve semitones in this scale have two slightly different sizes. Thus, the scale is not perfectly symmetric. Many other tuning systems, developed in the ensuing centuries, share a similar asymmetry. Equally spaced pitches are provided only by equal temperament tuning systems, which are widely used in contemporary music. The term chromatic derives from the Greek word chroma, meaning color. Notation[edit] Steve Reich. Igor Stravinsky. Igor Fyodorovich Stravinsky (sometimes spelled Strawinsky or Stravinskii; Russian: Игорь Фёдорович Стравинский, transliterated: Igorʹ Fëdorovič Stravinskij; Russian pronunciation: [ˌiɡərʲ ˌfʲjodɐrɐvʲɪt͡ɕ strɐˈvʲinskʲɪj]; 17 June [O.S. 5 June] 1882 – 6 April 1971) was a Russian (and later, a naturalized French and American) composer, pianist and conductor. 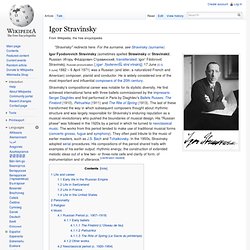 He is widely considered one of the most important and influential composers of the 20th century. Life and career[edit] Early life in the Russian Empire[edit] Noise Colours. Phill Niblock. Phill Niblock in performance. 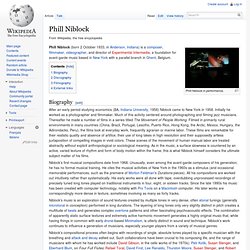 Phill Niblock (born 2 October 1933, in Anderson, Indiana) is a composer, filmmaker, videographer, and director of Experimental Intermedia, a foundation for avant-garde music based in New York with a parallel branch in Ghent, Belgium. Biography[edit] After an early period studying economics (BA, Indiana University, 1956) Niblock came to New York in 1958. Initially he worked as a photographer and filmmaker. Interval (mathematics) , the set of all negative real numbers, and the empty set. Real intervals play an important role in the theory of integration, because they are the simplest sets whose "size" or "measure" or "length" is easy to define. The concept of measure can then be extended to more complicated sets of real numbers, leading to the Borel measure and eventually to the Lebesgue measure.

However, various societies do not have these associations. Just intonation can be contrasted and compared with equal temperament, which dominates Western instruments of fixed pitch (e.g., piano or organ) and default MIDI tuning on electronic keyboards. Tone cluster. Example of piano tone clusters. The clusters in the upper staff—C♯ D♯ F♯ G♯—are four successive black keys.