~ Our Origins : The Pig-Chimp Theory ~

Macroevolution.net: The site where all started.

Macroevolution: The Stabilization Theory. The mysterious case of the platypus...and mammalian hybrids. Topics on different boards. Skeptics point of view. Responses from McCarthy to skeptics. Video summarizing the theory. 'Humans evolved after a female chimpanzee mated with a pig': Extraordinary claim made by American geneticist. Dr Eugene McCarthy points to features that distinguish us from primatesHe says that the only animals which also have these features are pigsControversial hypothesis has been met by significant opposition By Damien Gayle Published: 09:45 GMT, 30 November 2013 | Updated: 10:16 GMT, 5 December 2013 The human species began as the hybrid offspring of a male pig and a female chimpanzee, an American geneticist has suggested. 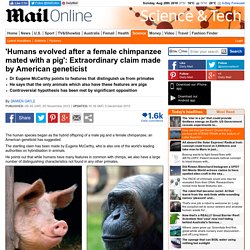 Georgia geneticist challenges evolution, links humans to pigs - SaportaReport. By Ben Smith Our ancestor may have looked like this. 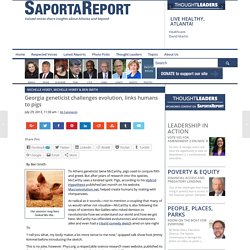 To Athens geneticist Gene McCarthy, pigs used to conjure filth and greed. But after years of research into this species, McCarthy sees a kindred spirit. Pigs, according to his Hybrid Hypothesis published last month on his website, Macroevolution.net, helped create humans by mating with chimpanzees. 1st Phys.org Article : A chimp-pig hybrid origin for humans? (Phys.org) —These days, getting a Ph.D. is probably the last thing you want to do if you are out to revolutionize the world. 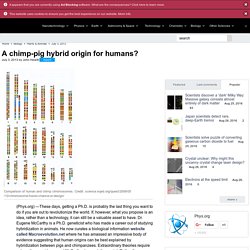 If, however, what you propose is an idea, rather than a technology, it can still be a valuable asset to have. Dr. Eugene McCarthy is a Ph.D. geneticist who has made a career out of studying hybridization in animals. He now curates a biological information website called Macroevolution.net where he has amassed an impressive body of evidence suggesting that human origins can be best explained by hybridization between pigs and chimpanzees. Extraordinary theories require extraordinary evidence and McCarthy does not disappoint. 2nd Phys.org article : a closer look at the theory and evidence. There was considerable fallout, both positive and negative, from our first story covering the radical pig-chimp hybrid theory put forth by Dr. 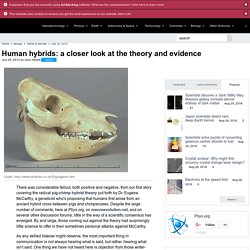 Eugene McCarthy, a geneticist who's proposing that humans first arose from an ancient hybrid cross between pigs and chimpanzees. Despite the large number of comments, here at Phys.org, on macroevolution.net, and on several other discussion forums, little in the way of a scientific consensus has emerged. By and large, those coming out against the theory had surprisingly little science to offer in their sometimes personal attacks against McCarthy. As any skilled listener might observe, the most important thing in communication is not always hearing what is said, but rather, hearing what isn't said. One thing we have not heard here is objection from those writer-scientists who have any kind of public reputation in the evolutionary sciences. Why Human Evolution Happened Only Once: The Question No One Has to Answer. Last time out, I asked, why, if information about chimpanzee behavior is supposed to provide insight into human behavior, nothing similar to human evolution ever happened to chimpanzees. 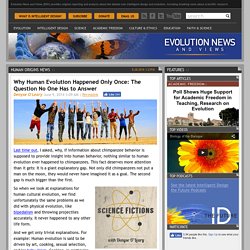 This fact deserves more attention than it gets: It is a giant explanatory gap. Human and Porcine Correspondence of Chromosome Segments Using Bidirectional Chromosome Painting. Pigs and primates more related than previously thought. (Phys.org)—In the past, geneticists focused primarily on the evolution of genes in order to trace the relationships between species. 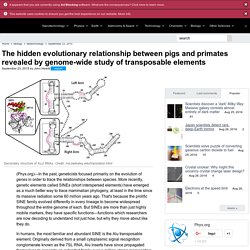 More recently, genetic elements called SINEs (short interspersed elements) have emerged as a much better way to trace mammalian phylogeny, at least in the time since its massive radiation some 60 million years ago. That's because the prolific SINE family evolved differently in every lineage to become widespread throughout the entire genome of each. But SINEs are more than just highly mobile markers, they have specific functions—functions which researchers are now decoding to understand not just how, but why they move about like they do. In humans, the most familiar and abundant SINE is the Alu transposable element. Originally derived from a small cytoplasmic signal recognition conglomerate known as the 7SL RNA, Alu inserts have since propagated themselves to generate an extended family over a million strong representing 11% of our entire genome. Chimps and Humans are Less Similar than We Thought. Human-Chimp Similarities: Common Ancestry or Flawed Research?

In 2003, the human genome was heralded as a near-complete DNA sequence, except for the repetitive regions that could not be resolved due to the limitations of the prevailing DNA sequencing technologies.1 The chimpanzee genome was subsequently finished in 2005 with the hope that its completion would provide clear-cut DNA similarity evidence for an ape-human common ancestry.2 This similarity is frequently cited as proof of man's evolutionary origins, but a more objective explanation tells a different story, one that is more complex than evolutionary scientists seem willing to admit. 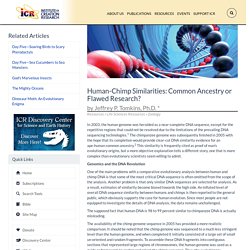 Genomics and the DNA Revolution One of the main problems with a comparative evolutionary analysis between human and chimp DNA is that some of the most critical DNA sequence is often omitted from the scope of the analysis. Another problem is that only similar DNA sequences are selected for analysis. As a result, estimates of similarity become biased towards the high side. Analyzing the Source of Similarity * Dr.