National Review. Overton window. The Overton window, also known as the window of discourse, is the range of ideas the public will accept. 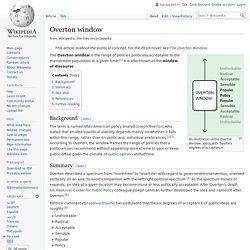 It is used by media pundits.[1][2] The term is derived from its originator, Joseph P. Overton (1960–2003),[3] a former vice president of the Mackinac Center for Public Policy,[4] who in his description of his window claimed that an idea's political viability depends mainly on whether it falls within the window, rather than on politicians' individual preferences.[5] According to Overton's description, his window includes a range of policies considered politically acceptable in the current climate of public opinion, which a politician can recommend without being considered too extreme to gain or keep public office. Overview[edit] JFK Online: JFK Assassination Resources Online. Politics. Home - thomas spence.co.uk. Thomas Spence. Base of the Reformers Memorial, Kensal Green Cemetery, showing Spence's name Life[edit] Spence left Newcastle for London in 1787.[1] He kept a book-stall in High Holborn. 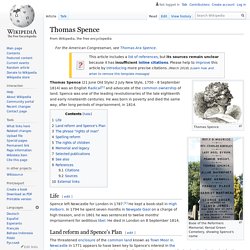 In 1794 he spent seven months in Newgate Gaol on a charge of high treason, and in 1801 he was sentenced to twelve months' imprisonment for seditious libel. He died in London on 8 September 1814. Land reform and Spence's Plan[edit] The Folly of Libertarianism. There is an ideology that is sweeping through right of centre political parties throughout the Western World. 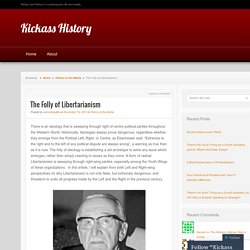 Historically, ideologies always prove dangerous, regardless whether they emerge from the Political Left, Right, or Centre; as Eisenhower said: “Extremes to the right and to the left of any political dispute are always wrong”, a warning as true then as it is now. The folly of ideology is establishing a set archetype to solve any issue which emerges, rather than simply reacting to issues as they come. A form of radical Libertarianism is sweeping through right-wing parties, especially among the Youth Wings of these organizations.

In this article, I will explain from both Left and Right-wing perspectives on why Libertarianism is not only false, but extremely dangerous, and threatens to undo all progress made by the Left and the Right in the previous century. Exiting The Anthropocene and Entering The Symbiocene. George lichtheim the concept of ideology. An Anarchist Blog. Technocracy News & Trends. Has a libertarian society ever existed? - The Libertarian Republic. By Ian Huyett It’s sometimes suggested that libertarian ideas are hazardous because they lack precedent. 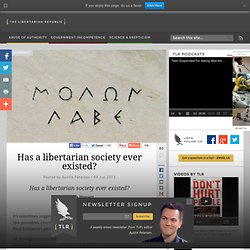 Functioning decentralized societies, it’s implied, are absent from humanity’s past. Yet throughout recorded history, nations have survived and thrived without the overarching authority that President Obama assures us is necessary for prosperity.

Debunking Austrian Economics 101 (Updated) I have updated my earlier set of links to various posts on my blog that debunk the theories of Austrian economics. 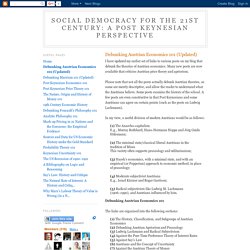 Many new posts are now available that criticise Austrian price theory and apriorism. Please note that not all the posts actually debunk Austrian theories, as some are merely descriptive, and allow the reader to understand what the Austrians believe. Free Market Anti-Capitalism: Vulgar Libertarianism Watch, Part 1. Everything You Need To Know About Libertarianism. 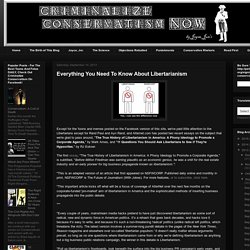 ": "This is an adapted version of an article that first appeared on NSFWCORP. Published daily online and monthly in print, NSFWCORP is The Future of Journalism (With Jokes). For more features, or to subscribe, click here. Theocratic Libertarianism: Quotes from Gary North, Ludwig von Mises Institute Scholar. Libertarian socialism. Libertarian socialism (or socialist libertarianism)[1] is a group of anti-authoritarian[2] political philosophies inside the socialist movement that rejects socialism as centralized state ownership and control of the economy.[3] Past and present political philosophies and movements commonly described as libertarian socialist include anarchism as well as autonomism, Communalism, participism, guild socialism,[27] revolutionary syndicalism and libertarian Marxist[28] philosophies such as council communism[29] and Luxemburgism[30] as well as some versions of utopian socialism[31] and individualist anarchism.[32][33][34][35] Overview[edit] Libertarian socialism is a Western philosophy with diverse interpretations, though some general commonalities can be found in its many incarnations. 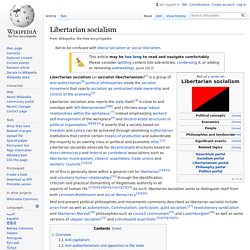 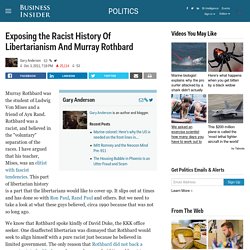 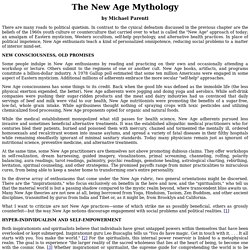 "Noam Chomsky": Lecture on Capitalist Democracy and its Prospects" "Losing" the World: American Decline in Perspective, Part 1. Significant anniversaries are solemnly commemorated -- Japan's attack on the U.S. naval base at Pearl Harbor, for example. Others are ignored, and we can often learn valuable lessons from them about what is likely to lie ahead. Right now, in fact. At the moment, we are failing to commemorate the 50th anniversary of President John F. Kennedy's decision to launch the most destructive and murderous act of aggression of the post-World War II period: the invasion of South Vietnam, later all of Indochina, leaving millions dead and four countries devastated, with casualties still mounting from the long-term effects of drenching South Vietnam with some of the most lethal carcinogens known, undertaken to destroy ground cover and food crops.

The prime target was South Vietnam. Liberty Library of Constitutional Classics. What Is Anarchism? An Introduction. Neoliberal Fallout of Hayek's visits to Chilé. Open-source governance. Power Elite Theory/ K. Carson. Direct democracy. Direct democracy (also known as pure democracy)[1] is a form of democracy in which people decide (e.g. vote on, form consensus on, etc.) policy initiatives directly, as opposed to a representative democracy in which people vote for representatives who then decide policy initiatives.[2] Depending on the particular system in use, it might entail passing executive decisions, the use of sortition, making laws, directly electing or dismissing officials and conducting trials.

Two leading forms of direct democracy are participatory democracy and deliberative democracy. The Federalist #10. The True History of Libertarianism in America: A Phony Ideology to Promote a Corporate Agenda. Bill Black: How Hayek Helped the Worst Get to the Top. By Bill Black, the author of The Best Way to Rob a Bank is to Own One and an associate professor of economics and law at the University of Missouri-Kansas City. Originally published at New Economic Perspectives. Testing Theories of American politics: Elites, Interest Groups, Average Citizens. "The Immorality of the State"/ Michail Bakunin. "The State: Its History...."/ Franz Oppenheimer (pdf ) Leftist. Studies in Mutualist Political Economy/ Kevin Carson.