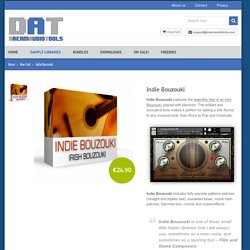 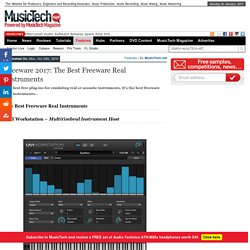 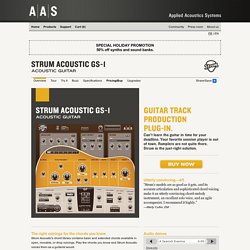 Play the chords you know and Strum Acoustic voices them as a guitarist would. Info. If you are serious about creating truly realistic sounding solo and accompaniment guitar stuff for your songs, our product called RealGuitar is just what you need. 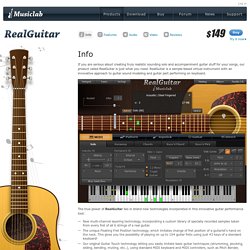 RealGuitar is a sample-based virtual instrument with an innovative approach to guitar sound modeling and guitar part performing on keyboard. The true power of RealGuitar lies in brand new technologies incorporated in this innovative guitar performance tool: New multi-channel layering technology, incorporating a custom library of specially recorded samples taken from every fret of all 6 strings of a real guitar.The unique Floating Fret Position technology, which imitates change of fret position of a guitarist's hand on the neck. This gives you the possibility of playing on up to 104 guitar frets using just 43 keys of a standard keyboard! These technologies allow to closely emulate live guitar sound and techniques, letting you perform guitar parts with a whole new level of realistic expression. Please see What's New in version 3. Ilya Efimov Production. Alan ViSTa - Free VST Instruments and Audio Units. Precisionsound. 19 Kontakt Developers You've Probably Never Heard of...

No matter the style of music you write, if you compose digital music, you’ve heard of Kontakt. Native Instruments‘ sampler is one of the most popular pieces of music software out there among film, tv and game composers with a huge range of developers creating sample libraries for it. From big developers, to small developers, there is an incredible range of instruments and sound to choose from.

Most people know the bigger developers, but we thought it might be useful to put together a list of the lesser known Kontakt library developers and companies out there. There are some absolute gems of libraries out there that many people just don’t know about. You might know all, you might know some, or you might even know none of them – if we missed any that you think deserve to be mentioned, please let us know in the comments! 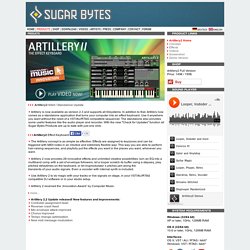 In addition to that, Artillery now comes as a standalone application that turns your computer into an effect keyboard. Use it anywhere you want without the need of a VST/AU/RTAS compatible sequencer. The standalone also provides some useful features like the audio player and recorder. With the new "Check for Updates" function all Sugar Bytes Products are up to date with just one click. Artillery2 Effect Keyboard The Artillery concept is as simple as effective: Effects are assigned to keyzones and can be triggered with MIDI notes in an intuitive and extremely flexible way. Electri6ity. After more than three years of development, Vir2 Instruments presents Electri6ity, an epic electric guitar virtual instrument containing the most advanced, detailed, and versatile collection of electric guitars ever made in a virtual instrument. 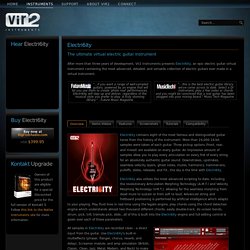 OverviewDemo VideosFeaturesScreenshotsTutorialsCompatibility Electri6ity contains eight of the most famous and distinguished guitar tones from the history of the instrument. Ancient Madame. The “Ancient Madame” is a Hurdy Gurdy Library for Kontakt 5. 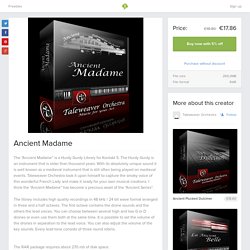