The Official Focusrite Store. You never know when a good idea is going to pop up, or when you're going to give the performance of a lifetime. iTrack Pocket gives you the ideal way to make great video recordings with CD quality sound, wherever you find yourself. 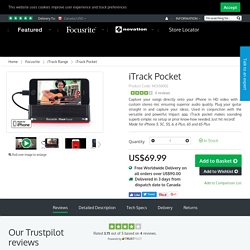 It's ideal for sharing to YouTube, or for anybody who wants an easy way to record their performances. Just connect your iPhone, open the free companion 'Impact' app and hit record. You'll capture HD video with stereo audio that eclipses the quality you'd get from your iPhone mic alone. iTrack Pocket will hold your phone at the perfect angle for recording videos, and let you plug your guitar straight in - so you can capture your performance without any background noise, with powerful built-in amp simulators. Sound mastering is instant and automatic, and editing couldn't be easier. Once you're happy, you can upload your videos directly to YouTube and share them with the world. The Official Focusrite Store. Whatever type of music you want to make, iTrack Dock makes studio-quality recordings on iPad easy. 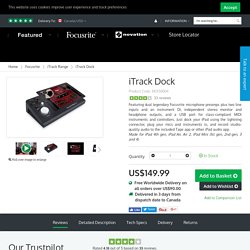 As soon as inspiration strikes, just dock your iPad and record directly into your favourite apps, including Garageband, Cubasis and Auria. iTrack Dock has two microphone preamps from the best-selling Scarlett range with 48V phantom power, two line/instrument (DI) inputs and a USB MIDI input, so you can plug in any microphone, instrument or compatible MIDI keyboard, and take full control of your iOS music apps. Connect headphones and studio monitors to make sure your tracks sound exactly as you want them. iTrack Range of iOS audio interfaces. Clammr Radio - Headline News, Music, & Podcasts. Home. Splice. Bitwig Studio. Today it’s possible to make music with any DAW. 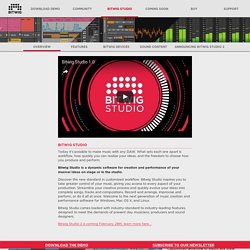 What sets each one apart is workflow, how quickly you can realize your ideas, and the freedom to choose how you produce and perform. Bitwig Studio is a dynamic software for creation and performance of your musical ideas on stage or in the studio. Teenage engineering – store. The #1 Source For Drum Loops, Samples, Reason ReFills, Ableton & More! Splice. AKAI Professional - The all-new APC Series. Roland helps YouTubers get their audio right with Go:Mixer. Your cell phone has an awesome camera on it, but if you’re doing streaming or YouTubing, you’re going to need to look elsewhere to make your audio mix come together. 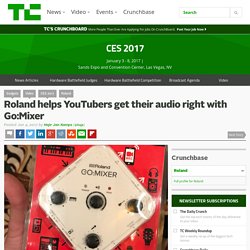 Musicians and podcast heroes rejoice: At $99, Roland‘s Go:Mixer might just prove to be the silver bullet to make magic happen. Most of the time, if you want your video to sound good, it involves syncing, recording, mixing, and all sorts of other misery. Yes, it sounds good, but who the hell has time for that? Ooh. Audiomodern. About GrandVJ - Eight channels VJ software for real time HD video mixing. Here's the all-new, improved GrandVJ 2 staging GrandVJ 2 comes with a new interface, making it even more user friendly and straightforward, while integrating new functionalities in it. 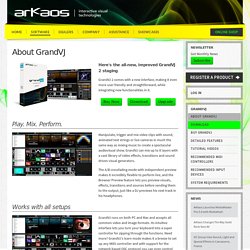 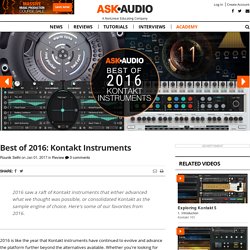 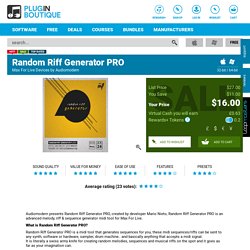 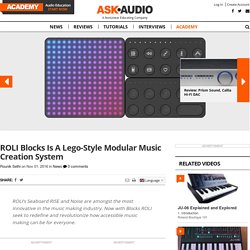 These are deemed by many as an evolution of the traditional piano-style keyboard musical expression interface. Well, today ROLI have launched their take on the future of the modular music studio with BLOCKS. Connected via magnets, think Korg littleBits, the aim is for music makers to build their own instruments in an intuitive and flexible way. There are 3 BLOCKS that have been announced today. RADIOHEAD LYRICS - Creep (Acoustic) "Creep (Acoustic)" When you were here before Couldn't look you in the eye You're just like an angel Your skin makes me cry You float like a feather In a beautiful world I wish I was special You're so fucking special But I 'm a creep I 'm a weirdo What the hell am I doing here? 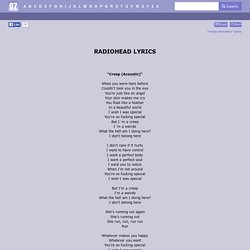 I don't belong here I don't care if it hurts I want to have control I want a perfect body I want a perfect soul I want you to notice When I'm not around You're so fucking special I wish I was special But I'm a creep I'm a weirdo What the hell am I doing here? I don't belong here. Orange Tree Samples. TouchOSC. Modular OSC and MIDI control surface for iPhone / iPod Touch / iPad Send and receive Open Sound Control and MIDI messages over Wi-Fi and control CoreMIDI compatible software, hardware and mobile apps. 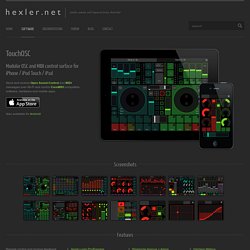 Also available for Android Screenshots. Komplete : Keyboards : Komplete Kontrol S Series : Nks : Nks Partners. Sonokinetic - Sample libraries and Virtual Instruments. The best Android music making apps in the world today. First the bad news: despite having a huge installed user base, when it comes to music making apps, Android remains very much the poor relation to Apple’s iOS. This isn’t because developers don’t want to release apps for Google’s mobile OS, rather that various problems - notably high audio latency and the fact that there are numerous devices and different versions of Android in circulation - have prevented them from doing so.

However, all is not lost. Sonoma Wire Works recently announced that it’s developed a low latency audio solution for Android (though time will tell if device manufacturers will implement this into their products) and more companies seem to be taking a second look at the platform. What’s more, there are Android music making apps on the market right now: what follows is a guide to some of the best ones available (they’re listed in no particular order, by the way). The best iPad/iPhone music-making apps in the world today. Although there will be some who'll try and tell you different, iOS music making apps are not just toys. Many of them are extremely accessible, certainly, but this isn't to their detriment. And, if you want to get serious, you'll also find plenty of apps that boast features that are on a par with those of their desktop cousins. What's more, there's more than one way to approach these apps. If you're looking for something that you can just pass a few minutes with on your commute, it's out there, while other releases can serve as great musical sketchpads that will enable you to start tracks that can later be worked on in your full Mac or PC DAW.